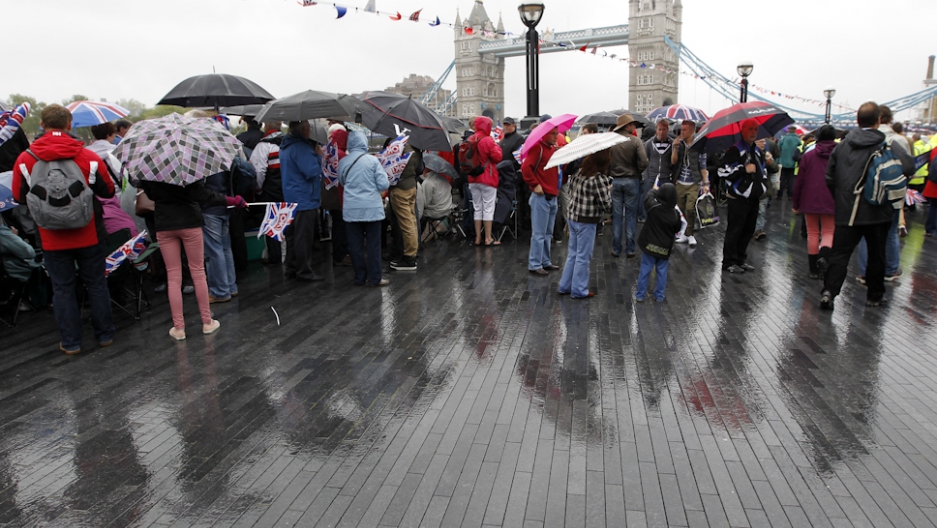 Spectators await the Royal Jubilee river Pageant near Tower Bridge in London, on June 3, 2012, where 1,000 vessels of all shapes and sizes will be part of the Diamond Jubilee river Pageant. Britain is celebrating the diamond jubilee of Queen Elizabeth II, marking 60 years on the throne during which she has set a number of landmarks.
Credit: IAN KINGTON
Share

Long-term unemployed who were bused in to work the Queen's Diamond Jubilee flotilla parade on Sunday were forced to sleep under the London Bridge, change in public, and work 14-hour shifts, many of them for no wages, the Guardian reported on Monday.

Up to 30 unemployed and another 50 people on apprentice wages were taken to London from Bristol, Bath, and Plymouth as part of the government's Work Program. Security firm Close Protection UK was in charge of staffing the event, according to AOL News.

"We all got off the coach and we were stranded on the side of the road for 20 minutes until they came back and told us all to follow them," one of the workers, who did not want to be named, told the Guardian. "We followed them under London Bridge and that's where they told us to camp out for the night … It was raining and freezing."

UK-based employment charity Tomorrow’s People was also contracted to supply unemployed workers for the event, and told the Associated Press that those who volunteered did so in the hopes of securing temporary jobs at the 2012 London Olympics.

The charity apologized Tuesday for their "big error" in organizing the staff at the Jubilee, which was held Sunday though Tuesday in honor of Queen Elizabeth's 60 years as Britain's monarch.

"That's something that we felt was was poor planning, we were really upset about it," Abi Levitt, the organization's director of development, told BBC News. "We take the care of people who work with us very seriously and it's just not acceptable."

Close Protection UK initially defended their handling of the situation, saying that the volunteers were given significant training and equipment which they were allowed to keep, AOL News reported.

"The nature of festival and event work is such that we often travel sleeping on coaches through the night with an early morning pre-event start – it is the nature of the business … It's hard work and not for the faint-hearted," Molly Prince, managing director of Close Protection UK, originally said in a statement, according to the Guardian.

However, the security firm soon backtracked on its initial explanations, offering its "sincere apologies" for the "London Bridge incident," according to AOL.

"If the allegations are true, it is totally unacceptable that young unemployed people were bussed in to London ...and forced to sleep out in the cold overnight before stewarding a major event with no payment," he wrote in a letter to Home Secretary Theresa May, according to the Independent. "I am deeply concerned that a private security firm is not only providing policing on the cheap but failing to show a duty of care to its staff and threatening to withdraw an opportunity to work at the Olympics as a means to coerce them to work unpaid."

"It also raises very serious questions about the suitability of using private security contractors to do frontline policing instead of trained police officers," he added.

More from GlobalPost: The Diamond Jubilee: 5 Things to Know