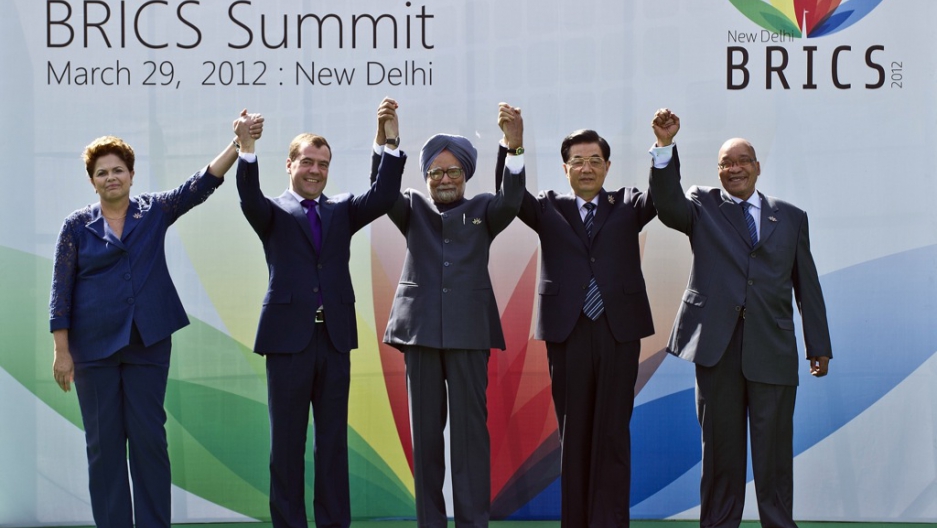 PARIS, France – When Goldman Sachs economist Jim O’Neill came up with the BRICs concept in 2001, it served as shorthand for a group of economies that deserved special attention even if they weren’t quite ready to join South Korea and Mexico as new entrants to the OECD group of developed economies.

But in one important sense, it represented pure concoction: Except that they were big and interesting, these countries had almost nothing whatsoever in common.

“The BRIC group was never meant to be a ‘club’,” recalled Jim Wygand, partner at the São Paulo-based consultancy Critical Corporate Issues (CCI).

Yet the fortuitous acronym had legs. It called attention to places that deserved to be watched. And it caught the imagination of international investors.

Lo and behold, fund managers began to set up special investment vehicles for the otherwise disparate contingent of Brazil, Russia, India and China. Global companies started talking about their BRIC strategies. Foreign direct investment (FDI) zoomed alongside portfolio cash. The management consultancy Arthur D. Little began differentiating between corporations with a 2.0 BRIC strategy and those still mired in the backwaters of 1.0.

When the BRICs successfully weathered the 2008 downturn, they really grabbed the world’s attention.

Things moved more slowly on the political side. After all, these countries had never been great friends beforehand. But eventually leaders of the four scattered nations caught the wave. In the image of the G8, they started having their own exclusive summits. In 2011, they decided to go plural, inviting an “S” in the figure of South Africa. A year later, there was talk that they might “save Europe” with a bailout.

More from GlobalPost: How real are the BRICS? Goldman-Sachs says 40% of world GDP real (by 2050)

Given their huge populations, much is made of the sheer weight of China and India. But even relatively small Brazil (population under 200 million) is setting new records for FDI. Major multinationals like Banco Santander have jumped in head first. The biggest lender among Spanish banks, Santander makes more money today in Brazil than in any of the other three dozen countries in which it operates: one-quarter of its earnings come from the Latin American nation. (Lately, rumors have suggested that Santander, hobbled by the crisis back home, is negotiating to sell Brazilian assets; the company denies this.)

No wonder, then, that we see hand wringing as BRIC growth begins to stall. Brazil and India are now slashing interest rates in an attempt to clamber back to previous plateaus. And in China, the debate isn’t so much about whether there will be a downturn as whether the landing will be soft or hard.

So if you run a global company that has carefully built a BRIC strategy, what do you do now?

We polled the experts.

Tip 1: Abandon that BRIC strategy but not necessarily all of the BRICs; Focus on the places that really make sense for your company

In Wygand’s view, “CEOs should simply look at each of the BRICs and choose to invest on the merits of each. There is neither need nor justification for a BRIC-specific strategy. You don’t need to be in Russia because you are in Brazil, or in China because you are investing in India.”

“In good times, companies can get away with being unfocused and sloppy,” says Ravi Ramamurti, CBA distinguished professor of International Business & Strategy and director of the Center for Emerging Markets at Northeastern University. “The ‘plant-the-flag’ approach to internationalization may seem good enough. The slowdown provides the impetus to do the homework and focus the portfolio on the most promising emerging economies. For example, Russia may not belong in your portfolio, even though it’s a BRIC, but Turkey or Indonesia might. Do the analysis, looking at the potential for top-line and bottom-line growth.”

Notes Beni Lopez, Chief Globalization Officer (CGO) of Softtek, a global IT firm: “The growth seen in the economies of Brazil, India, China and Russia has been fueled by direct foreign investment and also the boom in demand for some of their natural resources (oil, natural gas, agricultural products). However, it is also important to realize that each one of these countries is completely different from the other. Thus, all four or five countries cannot be measured by one metric or with the same perspective. If you look at the IT outsourcing industry, for example, exporting from India, China, and Brazil is very different.”

Tip 2: Look beyond the Big Four

Executives with a sense of adventure might want to follow the lead of bond investors who have championed the battle cry “Beyond the Big Four!” in their search for higher returns. Emerging market fixed-income fund managers cite Mexico, Turkey, South Africa and Poland as anchors. Many are looking at BRIC neighbors like Argentina, sitting just south of Brazil, and Sri Lanka, just south of India. Perhaps FDI should expand its horizons as well.

"While much focus in the last few decades has been on the BRICs, current and potential investors are not necessarily recognizing the rich opportunities that exist in other economies,” says Lopez. “Mexico, for example, with regards to the fundamentals of the economy, is very well positioned in terms of GDP vs. debt ratio, or in terms of exporting.” Lopez adds that “Investments in countries like Mexico, Colombia or even Peru, are proving to be very profitable with regards to cost and improved business regulations.”

According to Manoj George, CEO at Nair & Co., a Florida-based firm that provides integrated business solutions for overseas clients, and the former founding CFO of Red Hat, the open source software firm: “New markets like Indonesia, Turkey, Vietnam and the Philippines are emerging and may not trump but will surely provide a challenge to BRIC dominance. CEOs cannot ignore the BRICs — no matter what the pundits predict — but they should not turn a blind eye to the emerging economies either. A reality check is in order.”

CEOs must begin to stand up for sensible public policy, labor reform and protection of human rights in emerging markets, according to Bhaskar Chakravorti, senior associate dean of International Business and Finance at The Fletcher School at Tufts University.

If companies continue to rely on the BRICs to fuel growth, he warns, they are setting up the equivalent of what he views as a global pyramid scheme that is bound to ultimately collapse. While the economics of the emerging markets are attractive, he says, people often forget that there is more than just a “market” in the emerging market; there is a surrounding context. In his view, what is unusual about this new global order is that the “contextual factors” that dictate how the emerging markets perform have not kept up with their growth rates.

There is evidence that some companies are moving in this direction. Murilo Ferreira, CEO of Brazil’s Vale, the world’s second largest mining company, noted that one of his firm’s biggest challenges is how to manage “our relationship with the communities where we operate. And then the environment and sustainability.”

A report on mining sector trends in 2012 by the international consultancy Deloitte summed it up as addressing the issue of “restless stakeholders.” Beyond communities, players include national and local governments, shareholders and non-governmental organizations. By taking extra steps to be good corporate citizens, multinational mining executives hope to buy insurance against nationalizations, excessive regulation, higher taxes, and protests that could hamstring operations.

Tip 4: Park your cash where you can get to it

“Historically, currency crises have occurred when Western investors lost faith in the developing markets,” said Karl K. Schamotta, senior market strategist, Western Union Business Solutions. “Capital flight destroyed currency values and toppled countries like dominoes. Today, many of these countries have imposed strict capital controls in an attempt to prevent this happening in the future. Businesses may find that funds are difficult to access in the event of a severe and unexpected downturn. Pooling funds in stable banking jurisdictions and highly liquid currencies can be a critical survival strategy.”

Tip 5: Prepare for shifts in the attitudes of fickle investors

“Companies have been punished for low levels of emerging market exposure, or rewarded for high levels for many years,” said Schamotta. “This is not a stable situation, so ensure that your company has investment and public relations strategies in place to recover from a rapid pivot in investor perceptions.”

“Anything you want, we got it right here in the USA,” belted out Chuck Berry back in 1959. Since then the United States and other developed countries have seen jobs, especially in manufacturing, escape to lower cost environs that seemed to have more upside potential. But things might be changing, in some sectors at least. According to an April 2012 survey of global technology and financial business leaders conducted by the global business law firm DLA Piper, 44 percent believe that Western economies offer the best opportunities for technology investment. Only 28 percent felt that the BRIC countries looked better. Forty-one percent of executives believe that China will have difficulty transitioning to a technology/innovation economy, up from only 18 percent two years ago. According to 95 percent of tech leaders, the United States still represents the best environment for the creation, investment and growth in innovation and technology companies.

Focusing on the practical details of doing business on a day-to-day basis changes one’s perspective. “Emerging markets look extremely attractive from a macro perspective, but realities at the micro level are often quite different,” says Schamotta. “The European Union might be considered the inverse. Try to strike a balance between big picture and granular analysis when building your strategic plans.

Tip 7: Position yourself for the rebound

“Use the down cycle to expand your strengths in the chosen countries,” says Ramamurti. “The US dollar is stronger, stock markets in the BRICs are lower, and local companies are hurt more by the slowdown than Western multinational corporations (MNCs). This is the time to attack, not retreat. MNCs should use the slowdown to acquire local companies, expand distribution, and hire talent — so they can thrive when growth resumes.”

Tip 8: Ignore the bearish pundits: Invest for the long-haul

“I don't think the BRICs will ‘crumble,’” says Richard Lapper, principal of FT Brazil Confidential, a fortnightly research report published by The Financial Times newspaper. “There might be a correction but basically people betting on long term BRIC growth are doing the right thing. So my advice would be to stick with the program and don't be put off by the bears on the financial markets.”

Says George: “The BRIC countries will continue to offer viable opportunities for making money but foreign companies will just have to come to terms with the fact that they are now dealing with more experienced markets. As economies mature, they have more protective regulatory and tax and compliance frameworks and those challenges will need to be navigated. CEOs must provision for this.”