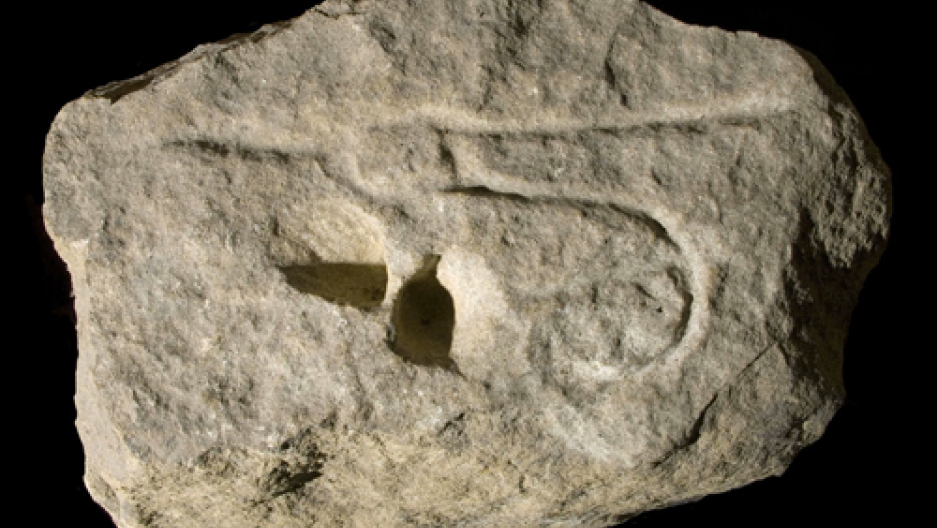 Female vulva associated with an “anneau”. (At least that's what the scientists are seeing here.) The art was discovered on the ceiling of a dwelling inhabited by a group of Aurignacian reindeer hunters some 37,000 years ago.
Credit: Raphaëlle Bourrillon
Share

Some 37,000 years ago — yes, that’s a few years before Hugh Hefner was born — humans appeared to have been just as fascinated with the vulva as they are today. Well, at least in the south of France.

Fifteen years ago, scientists discovered wall art on the ceiling of a dwelling that was formerly inhabited by a group of Aurignacian reindeer hunters.

Based on the analysis of the art, it turns out that reindeer weren’t the only thing the hunters were into nearly 40 thousand years ago.

Futurity, a research team of more than a dozen researchers from American and European universities has published a study called “Context and dating of Aurignacian vulvar representations from Abri Castanet, France.“

Their work appears in the latest edition of the Proceedings of the National Academy of Sciences.

It it, scientists offer evidence of the role art played in the daily lives of Early Aurignacian humans, including these artifacts of human symbolism.

But this sex columnist has questions about the vulva art.

I have been looking at the photo of that limestone slab for a while now and I just can’t see the vulva. Granted, I have been known to stare at maternal ultrasound photos for minutes without seeing a baby.

But at least with a baby they give you some pointers to make out in the mess of gray scale — head, feet, whatever — but with a vulva?

I’m not even sure which way I’m supposed to be looking.

Is it horizontal or vertical? And, how did the scientists identified this thing as a vulva in the first place?

Do you have to have a PhD in “abstract vulvar recognition” to be able to tell a vulva from, say, a penis with a stick in it?

Because that’s kind of what it looks like to me.