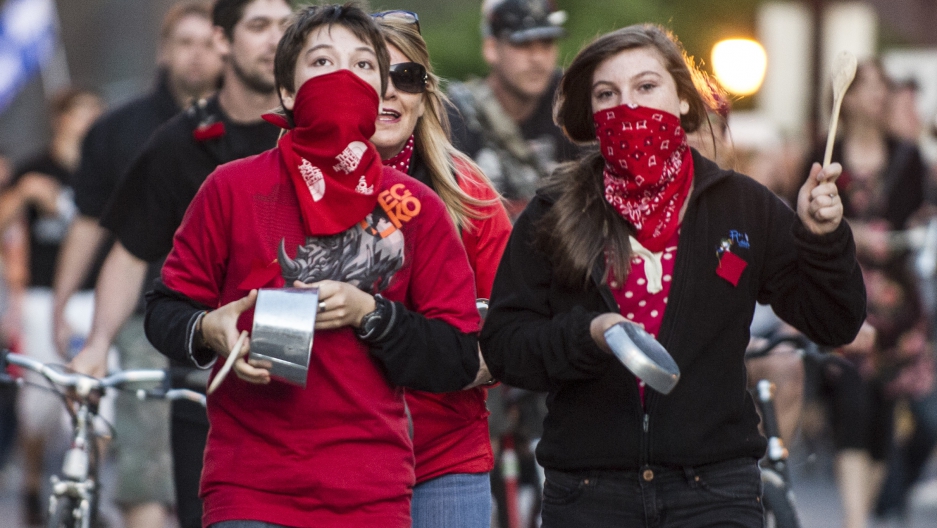 MONTREAL, Quebec — If you want to find a protest in Quebec these days, it’s best to follow your ears.

You can hear them from blocks away, before you can see them: metal lids keeping a beat, ladles banging against pots, spatulas tapping on frying pans, stirring spoons drumming on aluminum bowls.

On a recent Wednesday night, hundreds of Montrealers with red squares pinned to their clothes marched down St. Lawrence Boulevard, Montreal’s main street. Then came the skateboarders, and on their heels marched everyone else — with all kinds of kitchen utensils in hand. One person used an empty potato chips bag, a couple of people carried drums. Two gray-haired protesters in wheelchairs, with pots on their laps, brought up the rear.

In front of them rode several policemen on bicycles in glow-in-the-dark vests.

Residents of Quebec have been taking over their cities’ streets with kitchen utensils every evening for over a week to protest against Bill 78, an emergency law that was introduced by the provincial government to quench student demonstrations against tuition hikes. But the new law, which imposed fines and restrictions on assemblies of more than 50 people, has thrown more wood on the fire.

Now, Quebecers who didn’t protest against tuition hikes are banging on pots to protect the rights of free speech and assembly.

The “casserole” protests have expanded to communities all over Quebec — and cities outside of the province. On May 30, Canadians in Toronto, Calgary, Halifax and Vancouver made noise to show solidarity with Quebec in an event that was called “Casserole Night in Canada.”

“I think it’s shameful. I never thought we’d see something like this in Canada,” said Gilles Sabourin, 49, an engineer who started nightly casserole walks in St. Lawrence Boulevard, a wealthy suburb of Montreal recently. “I think it’s really an attack on the right to protest and express one’s opinion.”

On some nights, more than 200 residents of his small town walked for an hour with their pots, he said.

“We have some students, but they are not the majority. Many grandmothers are there, and parents with children in strollers. It’s not only a student issue,” he said.

There was even one 85-year-old lady “who said she was walking for her grandchildren,” he added.

Pot-banging protests originated in Chile in the 1970s, when Augusto Pinochet prohibited gatherings of more than four people. In Spain, people picked up their pots to protest the invasion of Iraq, and in Argentina people used the same method to show their discontent when the government froze bank accounts.

Just this week, Argentines went at it again, erupting with a raucous anti-government “cacerolazo,” as the casserole clamor is known in Spanish. (This YouTube video contains some of that raw noise.)

In Quebec, student protests started months ago in response to the proposed increases of post-secondary tuition fees by $325 annually for five years. This may not sound like much, but it would mean a significant increase in Quebec, where students pay less than $3,000 per year. It is the lowest rate in Canada.

Before the pots and pans strategy caught on, university students staged several naked protests in Montreal. They took to the streets in their underwear and bras, some painting their bodies and attaching red squares to their nipples.

Since the start of the movement, more than 2,500 demonstrators have been arrested — and dozens were hurt. One person lost an eye because of a rubber bullet, said Renaud Poirier-St-Pierre, spokesman for student group CLASSE. There were also head injuries and broken arms and legs.

“We have been fighting for years to have low tuition fees, that’s why we’re continuing the fight now,” he said.

This week, representatives from three student groups and Quebec's education minister failed to reach an agreement after four days of intense negotiations that sometimes lasted until 11 o'clock at night. The negotiations were interrupted on Thursday, after the students rejected the government’s proposal to decrease tuition hikes by $35 per year.

Meanwhile, it is not clear that protests would end even if the government and the student representatives came to an agreement. The pots-and-pans movement has now expanded beyond the control of student organizations, into spontaneous gatherings. Wearing red squares pinned to their clothes, some protesters want universities to be completely free, while others are calling for the resignation of Quebec’s Premier Jean Charest.

More from GlobalPost: Going for the hajj? There’s an app for that

“I think he has proven himself very arrogant and very unable to deal with the situation. I think he has lost the confidence of the people,” said Justyna Dawidowicz, who comes out on her balcony in Montreal every evening at 8 p.m. to bang on a pot with her 2-year-old son.

Dawidowicz and others in Montreal said that although they care about politics, they also enjoy making noise in solidarity with their neighbors.

“It really gives you a sense of community. That’s really what’s missing in our lives especially in big cities — you’re surrounded by people, but you can be quite isolated,” Dawidowicz said.

At least one Montrealer, however, was annoyed by the nightly protest marches.

“I have to wait in traffic sometimes for one hour,” complained a waiter at Schwartz’s, Montreal’s famous smoked meat restaurant. “I’m not against the protest, but I have to get home from work and wake up the next morning.”