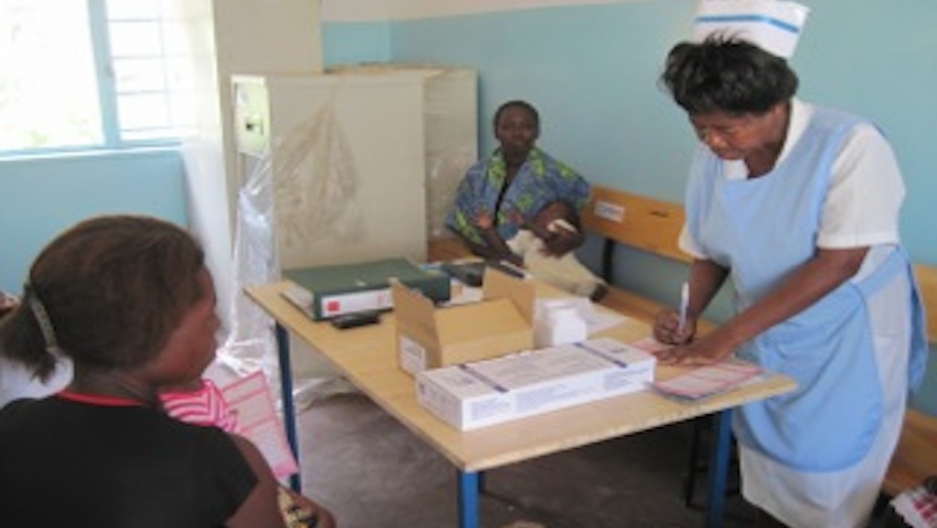 Clinics like this one in Zambia could be affected by the Global Health Initiative's new program.
Credit: Janet Fleischman
Share

Janet Fleischman is senior associate at the Global Health Policy Center of the Center for Strategic and International Studies (CSIS).

Maternal mortality is the ultimate health indicator, reflecting both a health system’s strength and how accessible it is to women and girls. If successful, “Saving Mothers” will be an important dimension of Clinton’s legacy as Secretary, lifting the lives of women, families, and communities around the world.

The “Saving Mothers” project is the first concrete expression of how the Obama Administration’s Global Health Initiative (GHI) can change the way the U.S. government operates in the global health arena.

It is a concentrated pilot in targeted geographic areas of Zambia and Uganda that focuses on a limited time window—the first 24 hours around labor, delivery, and the immediate postpartum period—because two-thirds of maternal deaths and 45 percent of neonatal deaths occur in that crucial span of time. The aim of “Saving Mothers” is to reduce maternal deaths by 50% in 12 months – by June 2013.

Yet the program’s success is far from assured. The question that inevitably arises is whether these big ideas and much-needed goals for reducing maternal mortality can be translated into building the long-term support necessary to address maternal and child health – the core of health systems in developing countries – while reformulating long-standing and sometimes difficult relationships between multiple U.S. agencies that each have a piece of the U.S. global health agenda, all at a time of shrinking U.S. foreign assistance budgets?

Until now, GHI has been more of an approach than a program, which has made it difficult to quantify on the ground. It seeks to solve global health problems by building on and linking with existing health programs and focusing on seven core principles.

The first principle is women, girls, and gender equality, and is intended to increase attention to these areas throughout U.S. global health programs. In many respects, this principle reflects Secretary Clinton’s core areas of interest in women’s health and empowerment, which have been central to her approach to foreign policy, health, development, and security.

“Saving Mothers” is designed to build on programs already put in place by the President’s Emergency Plan for AIDS Relief (PEPFAR), the U.S. Agency for International Development (USAID), and the Centers for Disease Control and Prevention (CDC), as well as Peace Corps and Department of Defense. GHI officials say “GHI is a way of doing business—it’s not a pot of money.”

GHI is exploring some new public-private partnerships to help bring in sustainable financing for “Saving Mothers.” This includes support from the Norwegian government, Merck for Mothers, the American College of Obstetricians and Gynecologists, and Every Mother Counts. Secretary Clinton announced that the U.S. is committing $75 million to this initiative, although the majority of this is not new funding, but rather shifted from other accounts.

The addition of such alternative funding and support will be critical, given this time of austerity in international assistance budgets. This challenge is especially acute since President Obama has committed to raise the numbers of people living with HIV on antiretroviral therapy (ART) from 4 to 6 million by 2015, on a flat budget.

When evaluating the concept underlying “Saving Mothers,” some observers are skeptical—even cynical. One implementing partner called it “an unrealistic set of expectations, magical thinking,” saying, “[Saving Mothers] gets high marks on the spirit of this, but low marks on reality checks…this is a health systems issue—there’s no magic bullet. ….There’s no pill.”

Another analyst pointed out that it will take 4-6 months just to get the infrastructure in place, and that the expected impact won’t be achievable in one year. “We all know it’s impossible—it’s aspirational.”

GHI officials acknowledge the challenges, but see “Saving Mothers” as a risk worth taking.

As one official explained: “Is it feasible? Is it the right thing to do? Do we have the courage and the will to make it happen? There is an element of risk, but we can do nothing or we can do something….This is a bellwether issue—if we can’t save mothers at birth, how can we move up the chain of progress? We have to break the cycle.”

And, despite the implicit urgency of “Saving Mothers’” one-year timeline, its greatest impact may be as a catalyst rather than a milestone.

As one observer put it: “If these sites have trained staff, transportation networks, and a new initiative with the SMS companies, everything will be in place so that the following year, we could reduce maternal mortality by 50 percent. We need the lead time.”

In Oslo, Secretary Clinton acknowledged that the world risks failing in its collective promise to cut maternal mortality by three-quarters by 2015, and outlined how new partnerships can help meet those commitments. That’s a tall order, especially in these tough economic times, but that’s the challenge and the opportunity of this new approach to tackling maternal mortality.