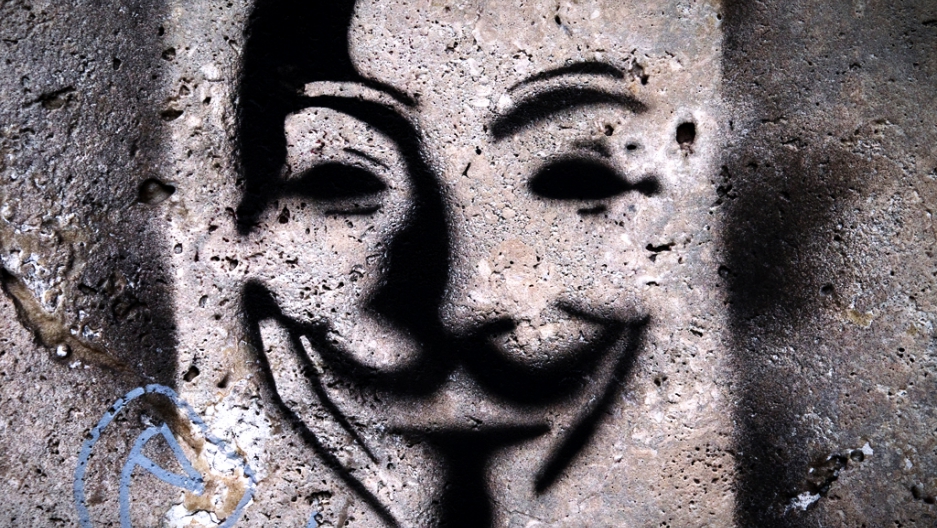 Picture of a painting on a wall representing Anonymous Guy Fawkes mask taken in a street of Paris, on April 24, 2012.
Credit: JOEL SAGET
Share

STOCKHOLM, Sweden — When a member of the hacker group Anonymous in February posted online the email addresses and passwords of Bashar al-Assad, the Syrian President, his wife Asma al-Assad, and countless other senior figures in the regime, it won plaudits worldwide.

But it didn’t much impress Telecomix, a rival "hacktivist" group that takes itself altogether more seriously.

“The Syrian battle had already gone from something that can be fought on the internet via hacked emails into a general civil war," says Martin Löwdin, a Telecomix activist. "Anonymous seem to think that we can still always fight all battles on the internet somehow.”

“There’s an ideological divide,” he shrugs. “We don’t really like the culture.”

I meet Löwdin late in the afternoon in a central Stockholm cafe he’s selected for its “awesome coffee.” In some ways he fits the hacker image. He goes by the code-name "mlowdi" online. He has a prominent tattoo of the infinity symbol. His netbook is plastered with hacker stickers. And he was up alone until 4 a.m. the previous night.

He shows me the chats streaming live from activists in Australia, the US and Europe on Telecomix’s message system, which he runs on a customized, Linux-based Nokia phone, loaded with open-source encryption technology.

“We’re not really that keen on nationality and real names and stuff like that,” he says of the group. “But there’s a core of maybe between 20 and 70 people pretty involved, some of them dropping out or dropping in depending on ordinary workload. And sometimes when there’s a lot of action, like when everything kicked off in Egypt, we had somewhere around 200 nicknames.

“We really had no plan, no agenda, no real organization. It’s just throwing things around and seeing what sticks. If people jump on a project, it’s a good project.”

Despite this anarchic approach, Telecomix is a fairly highbrow bunch, as interested in politics and philosophy as it is in programming.

Christopher Kullenberg, the group’s main founder, has just finished writing a PhD thesis on the theory of science. His 2010 book, "The Net Politics Manifesto," was reviewed in all Sweden’s serious newspapers.

Löwdin himself plans to soon start a PhD in rhetoric.

This perhaps explains the friction with Anonymous.

"There’s a lot of cross-over between Telcomix and Anonymous," says Löwdin. "A lot of us old-timers on the network, we get really pissed off when one of the chat servers that Anonymous uses goes down, because they sort of flood into our servers."

He cites the Tunisian uprising at the start of 2011 as an example of the difference in how the two groups work. Anonymous brought down the websites of the country’s prime minister and government. Telecomix instead disseminated encryption technology to Tunisian activists, helping them to communicate safely.

“Breaking into a system is one part, sure, but we don’t do that because we find it to be destructive, and it brings heat. If you want to help develop democracy and develop free speech you can’t just bring stuff down, you have to build stuff up, you have to create.”

Telecomix has won accolades that would embarrass Anonymous. Its co-founder Christopher Kullenberg was made Swede of the Year 2011 by Fokus Magazine, the Nordic country’s answer to Newsweek.

The magazine cited Telecomix’s work reopening the Egyptian internet for some 50 activists when the regime of Hosni Mubarak closed it down in January 2011.

It also commended the Telecomix operation last September, under which all internet users in Syria were redirected to an Arabic website instructing them on internet security.

“This is a deliberate, temporary Internet breakdown," read the message users were presented with. "Please read carefully and spread the following message. Your Internet activity is monitored.”

But it saved the most congratulations for what was arguably the group’s biggest coup: discovering that the Syrian regime was using internet-filtering equipment from Blue Coat Systems, a US vendor, to spy on — and then presumably arrest and torture — its dissident citizens.

Telecomix is still actively working with Syrian bloggers and activists, ensuring they can post and communicate safely, but the job is too time-consuming to cater to more than a handful of them.

“You can’t have tech support for 100 Syrians, because that would take 1,000 net activists to deal with it,” Kullenberg tells me over the phone from his home in Gothenburg. “It’s a continuous process, circumventing censorship is always a cat-and-mouse game, so if you find a method, this works for a few weeks, and then you have to find a new method.”

He’s conscious of the limits of online activism. “In Syria it’s actually very dangerous to use the internet, because they are actively looking for dissidents. Sometimes the advice is: ‘Don’t use the internet. It’s less optimal than some other forms of communication.’”

So Telecomix does more on the ground than Anonymous tends to.

Löwdin's father is a professor at Stockholm University’s computer science department, so he grew up knowing how to program.

Still, the night before I met him it turns out that he wasn’t hacking into the wee hours, but instead researching the laws of a country he’s visiting to teach political activists there how to secure their communications.

He wants to make absolutely sure he can’t be imprisoned for any of the encryption software he plans to bring.

“I’ve been teaching Belarusian dissidents as well, and Ukrainian democratic movement and people like that, going from place to place,” he says.

Telecomix dates its origins to a party at Kullenberg’s house in April 2009. Later that year, it had started helping activists protest a fixed Iranian election, and then in 2011 it got involved in the Arab Spring.

But that wasn't its original goal. It was set up initially to fight telecoms legislation proposed by the European Union. Kullenberg was one of a number of Swedish activists radicalized by the Swedish government’s crackdown on The Pirate Bay, a site that allowed users to share illegally ripped films and music.

“There was this new generation of net activists being shaped, and 2009, when there was the trial against the Pirate Bay, was perhaps the first time that this movement got together in a physical space because everybody went to the court house,” he explains.

Löwdin believes that with the upheaval of the Arab Spring now ebbing away, and Syria bogged down in revolution, the hacktivist mission has changed.

He believes that Telecomix should return to its roots as a campaign group against excessive government control and surveillance of the internet, both in the West and in the world’s dictatorships

Partly that means getting to the bottom of how Western surveillance technology gets into the hands of dictators. Blue Coat, for instance, is adamant it did not sell Syria any of the eight machines identified there. But it also means getting involved in fighting legislation in the European Parliament and US Congress.

Anonymous, meanwhile, continues to raise hackles. In mid-May, its activists hacked the US Department of Justice website and posted 1.7 gigabytes of its data online.

More from GlobalPost: 3D printing: Your body parts made to order

But it conceded that it had no idea what was in the data, or any focused goal in posting it beyond letting people “know the corruption in their government.” It’s exactly the kind of thing to make Telecomix try to keep its distance.

“Anomymous are kind of destructive,” says Löwdin. “We want to be more creative."