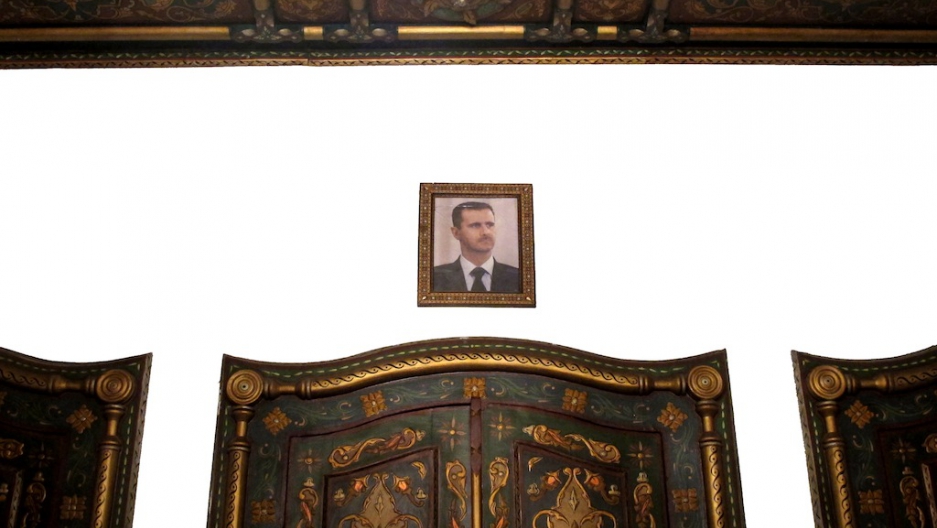 A picture of Syrian President Bashar al-Assad hangs on a wall over the reception of al-Pasha hotel in Damascus on February 15, 2012. Assad has decreed to hold a referendum for a new constitution on February 26, the official SANA state news agency reported on Wednesday. AFP PHOTO/PATRICK BAZ
Credit: Patrick Baz
Share

This is really getting medieval.

After Syrian security forces brutally slaughtered more than 100 Syrians in the town of Houla over the weekend, a Saudi intellectual is now calling for the head of Syrian President Bashar al-Assad. Yes, a bountry has been issued.

If you, or you, or you, can deliver the head of Assad to the prominent Islamic scholar, Sheikh Ali Al Rubai of Saudi Arabia, he will reward you with almost half a million dollars.

“We announce a reward of $450,000 to any one who will take off the head of murderer Bashar Al Assad, the perpetrator of massacres against women and children that have horrified the whole world,” he said on his Twitter page, according to Emirates 24/7.

Saudi Arabia openly supports the Syrian opposition, which is predominently drawn from the country's Sunni majority. The Syrian government, meanwhile, is almost entirely Alawite, a sect of Shiite Islam, which Saudi Arabia doesn't like, and the minority in Syria.

Assad has long claimed that the Syrian uprising is the work of foreign intervention, or, "foreign terrorists," as he calls it. Increasingly, the world is proving him right. Calls for Assad's assassination, for instance, as absurd as they might be, strengthen his claims. And it's a well-known secret that Saudi Arabia intends, or is already, arming the Free Syrian Army.

In fact, the foreign players in Syria continue to pile up. Numerous countries — including both Israel and Iran — are known to be operating in Syria one way or another. And now, hundreds of foreign jihadist fighters have slipped over the border to fight their own proxy battles, whatever they may be.

Such interventions appear to be giving Assad, at least from his perspective, justification for the brutal attacks on his own population.

"I am proud of your steadfastness which will keep Syria an invincible fortress in the face of all forms of penetration, and free in resisting submission to foreign forces," Assad said in January.