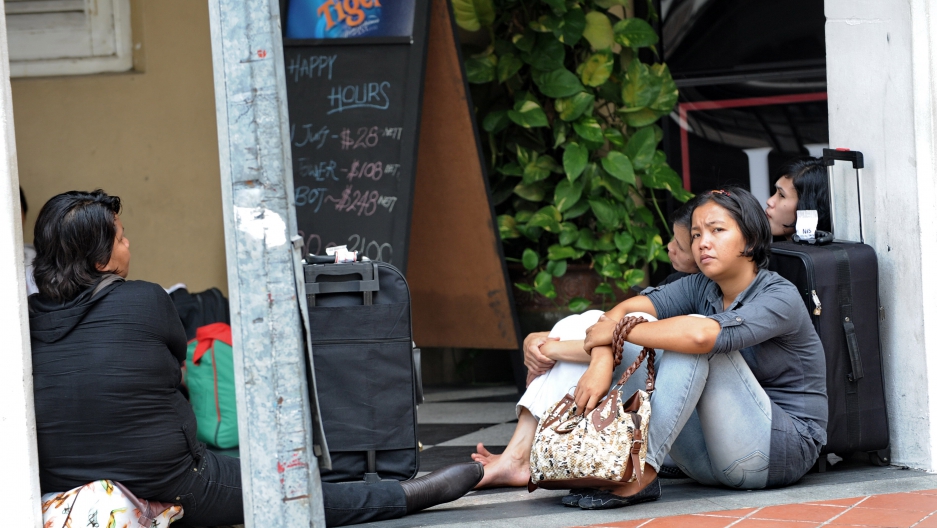 Newly arrived domestic helpers from Indonesia wait for their transportation to a maid agency after going through medical check in Singapore on March 6, 2012.
Credit: Roslan Rahman
Share

BANGKOK, Thailand — They call it a job. But working as a live-in maid in Singapore is really an all-consuming way of life.

As it stands, domestic workers in the affluent city-state are guaranteed no days off. Maids — inevitably women from poorer Southeast Asian countries — are largely under the dominion of their employers. How a maid calls home, or when she’s allowed outside, can be dictated by her boss.

These practices, however, appear to be prompting soul-searching among Singapore’s lawmakers. In recent years, they’ve tinkered with rules governing employers’ control over their live-in servants, which are found in roughly 20 percent of Singapore’s homes.

For domestic workers, the latest legal gain is their biggest so far: the right to demand at least one weekly day off starting in 2013. And as maids hanging laundry out of high-rise condos continue plummeting to their deaths — there are nine cases this year and 75 since 2000, according to government figures — Singapore has vowed to punish families that don’t provide safe working conditions.

“There is a perceptible shift in people’s attitudes and there is greater awareness among Singaporeans that [domestic workers] should not be treated as commodities,” said Jolovan Wham, executive director of Humanitarian Organization for Migrant Economics, a Singapore nonprofit. “However, discrimination against domestic workers is still systemic and ingrained in our culture.”

Wham chafes at the word “maid,” used by online placement services with titles such as NetMaid and Maids ‘R’ Us. “Using the term ‘maid’ is demeaning,” he said. “It reinforces their subservience.”

But for many Singaporean employers, subservience is precisely what they expect.

Tamarind, the nom de plume of an ethnic Chinese Singaporean mother of two, runs a blog for “employers who have suffered at the hands of maids.” It has become a popular repository for guidelines on controlling maids’ behavior and accounts of hires gone bad. On the site, maids are commonly described as scheming, duplicitous, lazy and unhygienic.

Tamarind’s own “house rules” for maids insists that they wake at 6:30 a.m., wait until 10:30 p.m. to sleep, wash their hair daily and ask permission before leaving the house. She appears more liberal than some of her blog contributors, who favor withholding maids’ cash and working them in perpetuity without a day off.

Wrote one employer named Yvonne: “They are birds of the same flock and never think your maid is special than others no matter how highly they are educated. Just imagine how much they can actually do behidn [sic] our back! Gosh!!”

According to Tamarind, foreign domestic workers often arrive from abroad without proper training in etiquette, housework and English, the country’s official language. (Singapore is a former British colony.) She contends that families who pay maids such a large portion of their monthly salaries deserve better service. It has taken her eight maids, she said, to find a suitable worker.

“My Indonesian maid is Muslim but she is a wonderful maid,” Tamarind said, “and she gets along very well with everyone in my family.”

Her site suggests this scenario is the exception. Tamarind would not consent to a phone interview but agreed to post questions from GlobalPost on her site and encouraged other employers to respond.

“I find the attitude of maids in recent years [is] not good or perhaps getting worse than maids of years ago,” wrote one respondent. “I am supposed to interview the maid but ends up [sic] they interview me and tell me they don’t want to do this and that and what they expect. Even telling me they want to go to bed by what time. Interesting!”

Throughout metropolitan Asian cities, live-in servants are not uncommon in wealthy homes. But go-getter Singapore appears particularly reliant on its 200,000-plus maids. Compared to their American counterparts, Tamarind said, Singaporean parents are more in need of maids.

Singaporean men are often unwilling or too busy to help with childcare or housework, she said, and Singapore’s dominant ethnic Chinese population expects home-cooked meals that are more difficult to prepare than Western food. Different expectations of cleanliness also come into play. “We prefer our floors to be cleaned daily,” she said, “because we let our babies crawl all over the floor.”

According to Singapore’s Ministry of Manpower, 51 percent of all Singaporean women are now engaged in the workforce. This percentage is comparable, though slightly beneath, figures for the US and UK.

When mothers are slaving away at the office, Tamarind said, these traditionally female chores are shifted onto maids. However, the women paid to live among Singaporean families, and answer to their idiosyncratic housekeeping and child-rearing demands, seldom share a common homeland, native language or faith with their employers.

Singapore’s maids are typically acquired with a $2,300 payment to agencies that bring in females from poorer neighboring countries such as Indonesia, Myanmar and the Philippines. Much of that payment is retained by the agency. Fees expected of the maid can be deducted from their salary for the first six to 12 months.

Singapore’s government also mandates that employers put away a $5,000 security bond that can be collected by the state if maids go missing.

Putting all that money on the line can stoke paranoia among employers, who often want to restrict their employee’s right to leave the home. “The security deposit has the undesirable consequence of perpetuating an unequal relationship between employers and domestic workers,” Wham said. “It creates a sense of proprietorship ... the mandatory security bond should be abolished.”

Singapore’s mandatory “weekly day of rest” law synchs with a broader trend of officials paying tribute to foreign maids. This year, the government will celebrate its third annual “Foreign Domestic Worker’s Day.” The government has also responded to the rash of maids spilling from high-rise apartment windows by training all incoming workers in safer laundry-hanging techniques.

A Ministry of Manpower-produced video — presented to new workers during a “Settling-In Program” — depicts a wide-eyed foreign maid gazing up at a tower. “Back home, they used to say Singapore grows rooms in the air,” she says. “I never thought I would be living in the sky one day.” She is later saved from a near-death spill by her boss.

At the most recent “Foreign Domestic Worker Day” gala in December, Tan Chuan-Jin, the minister of state for National Development and Manpower, urged Singaporeans to show more appreciation toward their domestic workers.

“The examples that we set as parents, in the way that we treat our [foreign domestic workers], will be learnt by our children who are observing it everyday,” he said. “It reflects poorly on us if we don’t uphold those values, as befitting the society in Singapore, and that is something that all of us ought to bear in mind.”

Tamarind has countered that Singaporean families are the ones offering less-affluent foreigners the ability to rake in much more money than they could earn back home. In response to the minister’s speech, she posted to her website:

“Why should we be grateful to them? In fact, the maids should be grateful to us! ... Your message is very insulting to all the full-time working mothers of Singapore.”