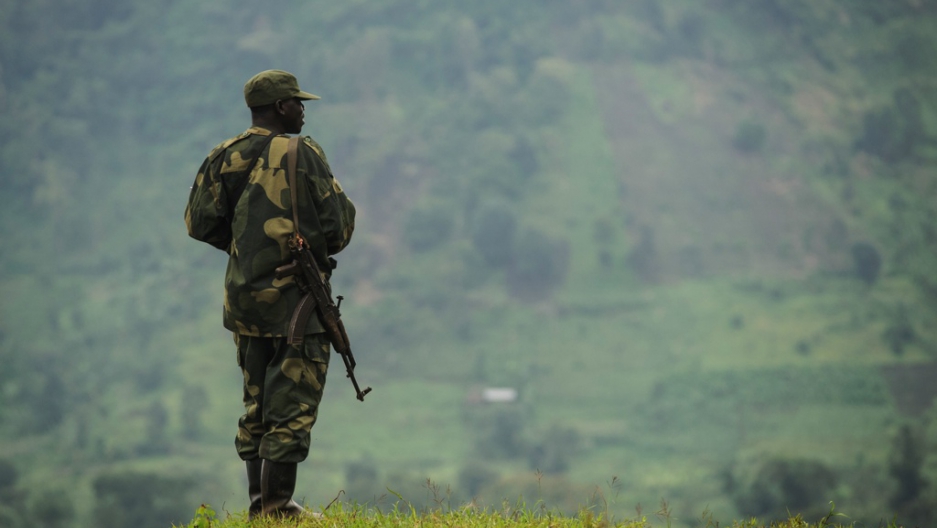 A soldier from the Armed Forces of the Democratic Republic of the Congo (FARDC) on the lookout for M23 rebels at an army outpost between the village of Kachiru and Mbuzi hill — an M23 rebel position — in North Kivu, eastern Congo on May 24, 2012. A UN report charges that Rwanda has supported the M23 rebels, but the Rwandan government denies the allegation.
Credit: Phil Moore
Share

NAIROBI, Kenya — Rwanda is once again backing a rebel army in neighboring Democratic Republic of Congo, according to damning testimony contained in a leaked internal United Nations report seen by GlobalPost.

UN officials interviewed 11 deserters from the rebel ranks, all of whom claimed to be Rwandan citizens, stated the report. They said they were recruited and trained in Rwanda earlier this year before being transported across the border to join a rebellion kick-started by Bosco Ntaganda — aka The Terminator — who is wanted for war crimes by the International Criminal Court.

Rumors of Rwandan support for the new rebel movement, dubbed M23, have swirled for weeks, but the UN debrief of rebel deserters offers the first evidence and will ratchet up tensions between Kinshasa and Kigali.

The deserters, including one minor, said they were recruited between February and April. They expected to join the Rwandan army but were instead sent to fight alongside rebels in eastern Congo. Sources told GlobalPost there were other deserters, not included in the UN report, with similar tales of being recruited from Rwanda.

A mutiny led by disaffected soldiers, formerly part of a Rwandan-backed rebel group called the National Congress for the Defense of the People (CNDP), started in April this year so the claimed recruitment dates are especially significant as they suggest the rebellion was pre-planned by some in Rwanda.

Rwanda issued a statement dismissing the allegations, which were first reported by the BBC, as “categorically false and dangerous.”

“Rwanda has maintained from the outset that the current instability in the eastern DRC is a matter for the Congolese government and military,” said Louise Mushikwabo, minister of foreign affairs and cooperation.

“Rwanda’s national interest is served by containing conflict and building deeper bonds of peace with our neighbors,” she said.

More from GlobalPost: Rwandans recruited to fight for DRC rebels

In Kinshasa a government spokesman said an inquiry was underway. “All those arrested after the last fighting are telling the same story,” Lambert Mende told Reuters.

Mende stopped short of blaming Rwanda directly. “Rwanda is denying it, and we don’t have any reason to doubt what they’re saying at this time,” he said.

Mushikwabo directed her anger not at Congo but at the UN mission, known as MONUSCO, which she accused of spreading rumors and branded it “a failure from day one.”

“MONUSCO has become a destabilizing influence, primarily concerned with keeping hold of its bloated budgets and justifying its ongoing existence,” she said.

Hostility between Rwanda and the UN stems from the 1994 genocide when the UN did nothing to stop the killing of 800,000 mostly Tutsi people. The UN then provided aid to over 1 million Hutu refugees, among them the perpetrators of the genocide, who fled across the border ahead of Paul Kagame’s advancing Tutsi army.

Instability stemming from the genocide has wracked eastern Congo ever since the tumult of more than 18 years ago.

The deserters interviewed by the UN this month said they were recruited by men in civilian dress and taken for processing to a hotel allegedly owned by one of Ntaganda’s brothers in Ruhengeri in northwest Rwanda.

From there they were taken to a training camp at Kanigi, seven miles away, where they surrendered their personal belongings and ID cards and were given uniforms, weapons and ammunition. From there they said they were handed over to men in Rwandan army uniforms, but without insignia, and taken to another unknown location where yet another group of soldiers took charge leading them to Runyoni, in eastern Congo.

At Runyoni one of the recruits claimed to have seen large stockpiles of ammunition as well as rocket launchers. A recruit who said he arrived in Runyoni in February said there were already two training camps set up with 270 recruits in just one of them.

More from GlobalPost: Rwanda Now: An in-depth look at one of Africa's most dynamic countries

Rwanda has been accused of complicity in training, recruiting and supporting rebellions in eastern Congo in the past, most recently in 2008 when a Tutsi group called the CNDP besieged the regional capital Goma.

At that time a report by UN investigators detailed strong links between the CNDP and Kigali’s political and military elites.

As part of a 2009 peace deal to end that round of fighting the CNDP leader Laurent Nkunda was put under house arrest by Rwanda.

Soon after, Ntaganda, his deputy, replaced him. The CNDP was then integrated into the Congolese army, but maintained its command structure and, according to some analysts, expanded its control over both territory and lucrative tin and gold mines.

Ntaganda was the first of the former CNDP officers to mutiny after another of his former commanders, Thomas Lubanga, was found guilty by ICC judges of crimes for which Ntaganda is also wanted.

Soon afterwards other CNDP officers also mutinied but have tried to distance themselves from Ntaganda by naming their rebellion "M23" after the March 23 date of the 2009 peace deal, and declaring a different leadership.

The fighting, underway since April, has forced tens of thousands of people to flee their homes according to UN agencies and shows no sign of abating.