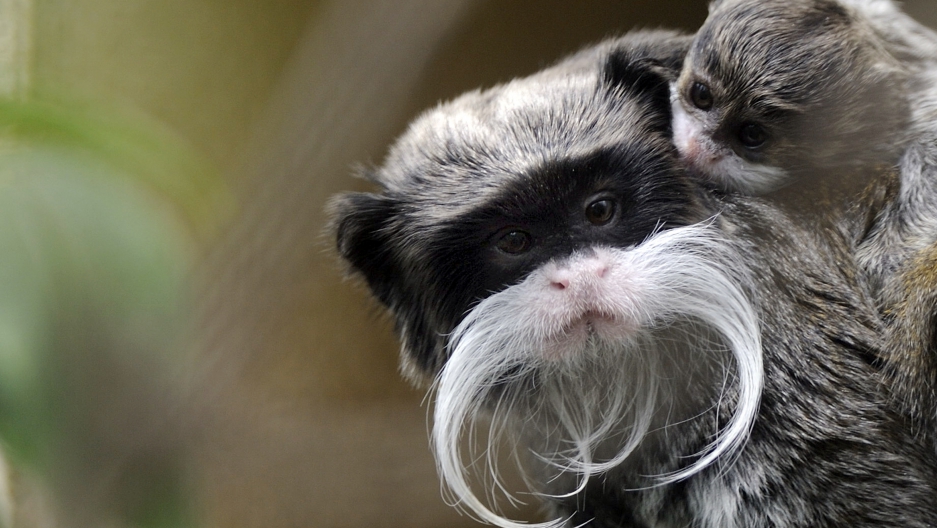 A 3-month-old pied tamarin (Saguinus bicolor) with its mother in their enclosure at the zoo in Mulhouse, northeastern France. Environmentalists say these creatures are threatened by Brazil's rapid expansion.
Credit: Sebastien Bozon
Share

MANAUS, Brazil — Marcelo Gordo tramples through a small pocket of jungle in Manaus, northern Brazil. Pushing aside branches and treading carefully on a carpet of leaves and twigs, the academic, complete with gray ponytail, searches for the pied tamarin, a small monkey native to the city and the surrounding Amazon jungle.

After nearly an entire day searching, the once ubiquitous monkeys are nowhere to be seen. "The species is in danger of total extinction," Gordo said, clad in a jungle pattern T-shirt. "As Manaus quickly grows, it accelerates the intense process of extinction of the species."

Besides a recent slump, Brazil's economy has surged since 2008 to surpass the UK as the world’s sixth-largest economy, and that growth is visible in cities like Manaus. But Manaus’ development is threatening the future of Saguinus bicolor, the small primate listed as endangered on the International Union for Conservation of Nature Red List.

The monkey's geographic range covers a relatively small area of the Amazon basin, reaching about 25 miles north of the city and 60 miles east. Sadly for the tamarin, Manaus' rapid expansion is only going to eat into its territory.

It is an unlikely site for a major city of around 2 million people. Manaus sits deep in the jungle, at the confluence of the muddy brown Solimoes and dark black Negro rivers, tributaries to the mighty Amazon.

The city had its first boom at the turn of the last century, when European and US investors came for the rubber. It was an extravagant period. The pink and white Teatro Amazonas opera house — the jewel of the Amazon, as it was once known — stands in Manaus' center as a beacon of the boom times.

Then the British explorer and so-called bio-pirate Henry Wickham stole the seeds for the Para rubber tree in the late 19th century. The boom came to an abrupt end as the British were able to grow the tree in other tropical parts of their empire. It was only in the late 1950s that the city began to grow again when the Brazilian government brought in tax benefits in order to maintain and build a population to save it from foreign occupation.

The Manaus Free Trade Zone was born and now hosts some of the world's biggest companies. Honda, Yamaha, Sony, Samsung and Foxconn all have major bases here.

More from GlobalPost: Did these ex-slaves catch your lunch?

"It's one of the best places in the world to invest and set up a factory," said Wilson Perico, director of the Technicolor factory in Manaus, manufacturing electrical equipment such as modems, as well as leader of two local industry organizations. "Manaus is the place to be.”

It was around the time the city became a free-trade zone that the tamarin's problems began. "Around 40 years ago, much industry began creeping into Manaus, thanks to political incentives," said Gordo. "The city was growing on top of the jungle. Behind it and at the sides, we have the great rivers so the city had to grow towards the north."

This is not the first time that Manaus has seen conflict between a rich natural environment and an incentivized private sector. In November, the first bridge over the Amazon opened, beginning road links between Manaus and the country’s rich south. The two-mile bridge is a potent symbol of the city's growth.

Brazil will host the FIFA World Cup soccer tournament in 2014 and the brand new 42,618-seater Arena Amazonia stadium is currently being built in Manaus. New hotels are being constructed to cater for the expected visitors, drawn in by soccer and a growing ecotourism industry.

Pinned up on a notice board at the office of Philip Fearnside, a Manaus-based academic at the National Research Institute for the Amazon and campaigner for the environment, is a drawing of Fearnside with an exaggerated bristling gray mustache and a hand raised towards an oncoming bulldozer, Tiananmen Square-style. His face has become the image, or caricature, of conservation attempts here.

"If you destroy the forest around Manaus, you're going to wipe out the tamarin," he said. Fearnside is also troubled by the building of roads such as the 560-mile BR-319 linking Porto Velho and Manaus by cutting through pristine rain forest.

"You can't expect to build highways crisscrossing the Amazon and expect deforestation to go down," he said. "It's very important the Brazilian government takes into account the environmental impact of allowing this to happen."

It is not only economic growth that is affecting the future of the pied tamarin. The creature faces another more natural threat on the northern and eastern borders of its small range around the city of Manaus. The golden-handed tamarin (Saguinus midas) is displacing the pied tamarin, forcing the population back toward the growing city.

"Any city has an impact when just spreading out," said Fearnside. That is especially true when that city spreads into the largest and most biodiverse tropical rain forest in the world.