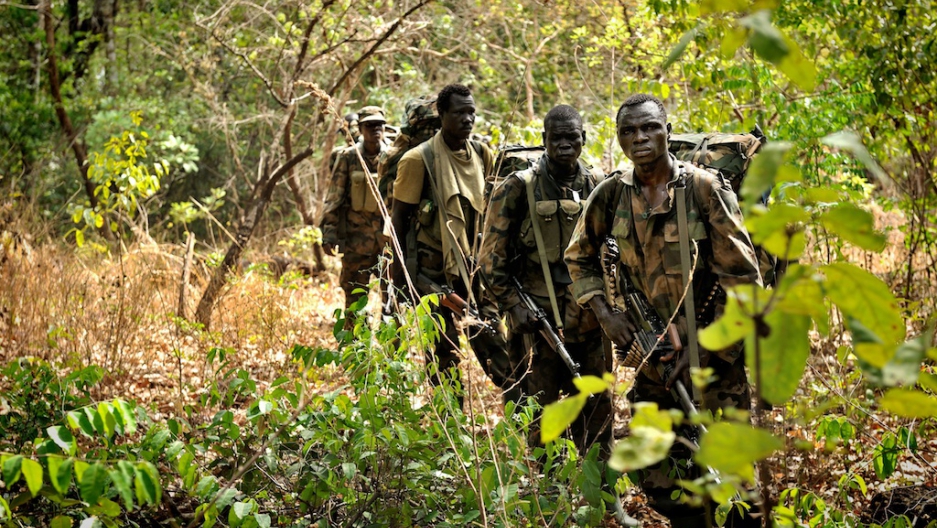 Ugandan soldiers patrol the central African jungle during an operation to hunt the notorious Lord's Resistance Army (LRA) leader Joseph Kony. The unit is one of several dozen Ugandan army search squads, advised since late last year by 100 American special forces troops, searching for any traces of the brutal rebel group in an inhospitable 250-mile stretch in the far eastern corner of the Central African Republic.
Credit: Yannick Tylle
Share

BOSTON — What will it take to catch Joseph Kony and bring an end to the scourge of his Lord’s Resistance Army in Central Africa?

Kony is now a household word in the US and much of the world thanks to the “Kony 2012” video released in early March that has been viewed by more 100 million people. The video campaign has raised awareness and helped to boost the military campaign to track down Kony.

But more effort is needed.

The 100 American military advisers are working closely with army troops from Uganda and the Central African Republic to catch Kony. But that has not stopped the LRA’s violence, so far this year there have been 50 attacks, nine deaths and 90 abductions, according to a new field report “Mission in the Balance: Challenges for US Advisers in Helping to end the LRA,” issued by the Enough Project.

Kony’s LRA is reduced to about 200 to 300 fighters that have broken up into small groups, according to Michael Poffenberger, executive director of Resolve, an anti-Kony pressure group in Washington.

“The relatively small number of LRA fighters have had a disproportionate impact across central Africa where their attacks, killings and abductions have caused more thatn 400,000 people to be displaced,” Poffenberger told GlobalPost. “More needs to be done to reduce the violence and to allow people to return to productive lives.”

The small bands of LRA are spread out among the thick jungle of the Central African Republic, Sudan and the Democratic Republic of Congo. Kony himself is suspected to be in Sudan, and there is speculation that he is getting support from Sudan President Omar al-Bashir.

“It’s no accident that Kony and other LRA fighters are operating in these areas. They are some of the most remote areas on the planet,” said Poffenberger. “The government administrations are weak to non-existent, they heavy forest makes it difficult to track them. These areas do not have paved roads, bridges and FM radio networks. Uganda has that kind of infrastructure which helped the Ugandan army to pursue and push the LRA out of their territory.”

In addition to Kony himself there are about five to 10 senior LRA commanders who run marauding bands, said Poffenberger.

One of Kony’s top commanders, Caesar Acellam, was captured on May 12 in the Central African Republic. He was Kony's intelligence chief and the most senior LRA commander to be taken captive. It is hoped Acellam will provide strategic information that will boost the campaign against Kony.

Small units of the Ugandan army had been tracking the movements of ‘Major General’ Acellam for at least a month. Laying siege throughout the day and night, Acellam was finally apprehended when he walked into a dragnet along the Mbomou River that marks the border between the Democratic Republic of Congo and the aCentral African Republic, reported the Ugandan Observer.

In order to avoid detection, Acellam was reportedly dressed like the ordinary cattle keepers that roam the jungles of the Central African Republic with their herds. Despite his modest education, having completed high school in northern Ugdanda, Acellam was one of the most meticulous and dangerous LRA commanders.

"I am confident Joseph Kony will be brought to justice. I am not confident when it will happen,' said Ham in an interview with Uganda’s New Vision newspaper. 'It is looking for a small group in a vast rugged area. The capture of Acellam is a good step. The questions that will be asked Acellam will help the forces learn about the status of LRA,' he pointed out.”

Ugandan authorities are debating whether Acellam will be eligible for amnesty, if he informs against Kony, or if he must be charged for the LRA violence, according to AP.

The success in catching Acellam highlights the need for more such measures to capture Kony.

“The mission of the US troops will fail in its objective of capturing Kony and ending the LRA unless some serious enhancements are added to the overall effort,” said John Prendergast, Enough Project co-founder. “What a waste of taxpayers’ money it will have been t send US forces to the region and then not have ensured that sufficient elements are in place for the mission to succeed.”

So what can be done to close the net on Kony and restore peace in central Africa?

1) More troops and better coordination. Currently the backbone of the anti-Kony drive is a contingent of 800 Ugandan army soldiers. More troops are needed to cover the huge area. And they need better regional agreements that will permit them to pursue the LRA across the borders Central African Republic and Congo and Sudan.

3) Better communications and community relations. Not all the effort against Kony is military. Community radio broadcasts and leaflets dropped by air can help reach out to Kony’s men and encourage them to surrender. They can be assured that they can return to their home communities and a peaceful way of life. This could be an important way to reduce Kony’s support.

“The disturbing fact is that the LRA continues to operate freely in the border areas of the Congo, South Sudan and the Central African Republic,” said Kasper Agger, Enough’s field researcher who is based in Kampala. “Only a multi-faceted approach, including increased troops and air power on the military side and increased communications encouraging LRA members to surrender, will succeed in bringing and end to the more than 20 years of violence and atrocities that Kony and LRA have spread across central Africa.”