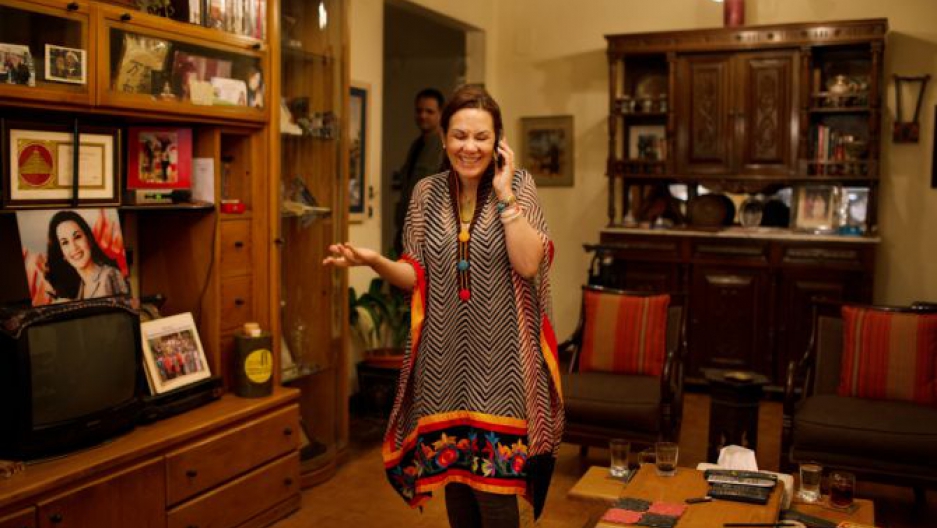 Bothaina Kamel speaks on her phone at her home in downtown Cairo before leaving in for TEDx Tanta, an ideas-oriented gathering held on May 19, 2012.
Credit: Elizabeth D. Herman
Share

CAIRO, Egypt — The room at TEDx Tanta is dark, packed, waiting. The announcer singsongs the name of Bothaina Kamel and as the crowd erupts, she steps from her front-row seat onto the carpeted stage with a flourish. Her gauzy, zebra-striped tunic is from India and her shoes from Kenya; her nails are manicured but without polish.

“We have to dream,” Kamel tells the audience, a broad smile across her face.

She lives by her word – a dreamer at the highest level, Kamel now claims the title of the first female to ever throw her hat into the ring for an Egyptian presidential election. Though her campaign gathered momentum – as well as a fair amount of attention from the international media – she failed to obtain the requisite 30,000 signatures by April 8 to make the ballot for this week's election.

Admittedly, this was no surprise. To all, Kamel’s supporters included, her candidacy never stood a chance – but that wasn’t the point. It was rather that she was stepping into the race at all, that she was challenging a widely held belief in Egypt that women have no place in politics. That she was starting a conversation.

“I love the Egyptian people very much and I know they suffered for a lot and they deserve freedom and dignity,” Kamel said.

Her recent TEDx talk is one in a long string of public appearances that she has made since stepping out of her former post as news anchor and into the political sphere last year. From conferences at the Press Syndicate to a steady string of interviews with the media, Kamel has kept herself well in the public eye. In recent years, she has done so on her own terms.

Such was clear in 2005 when she chose to remove herself as an anchor on the state television news rather than continue to read what Kamel calls “their lies” – the state-generated news. “It wasn’t easy,” Kamel said, “because I like to work and appear through the TV… to talk and discuss and explain, communicate with people.”  But she knew she couldn’t keep on with the show.  “I found myself in a critical moment, situation.  I told myself if I continue in this way, I will lose myself.”

The same year she, along with two other women, co-founded a watchdog group called, “Shayfeen” or “We Are Watching You,” to monitor the 2005 Egyptian presidential elections. Her connection to and love for the Egyptian people is palpable, a constant declaration that is nearly always on Kamel’s lips – and business cards, which read, “Egypt is my agenda.”

As she flips through old family photos that eventually lead to images of her navigating through Tahrir Square during last year’s political uprisings, light bounces off the large brass pendant around her neck.  It reads in Arabic, “down with military rule.”

Throughout the 18 days of protests that led to the ouster of former Egyptian dictator Hosni Mubarak in February 2011, as well as in the restive months that have followed, Kamel has been at the front lines of protests – chanting alongside other demonstrators, wearing a gas mask, holding signs – with one particularly iconic image showing her standing on a balcony above a sea of protesters swarming downtown Cairo below.

She recalls entering a liberated Tahrir Square on February 2, 2011, after what is now known as the “Battle of the Camel,” in which Tahrir revolutionaries successfully fought off pro-Mubarak supporters that attacked protesters on horses and camels. She remembers re-entering the square, “chanting, ‘Hold your head up high, you are Egyptian,’ under the Egyptian flag – [that] was a great moment.”

When asked if the revolution changed her path or direction, Kamel replied, laughing, “That’s life! Life, it changes. That’s natural.”

After Mubarak stepped down, she had hoped to return to newscasting. “I was naïve,” Kamel said. “I said I must come back to the Egyptian official TV and try to [push for] change … I told my colleague in the newsroom that the official news will be the most important.” But she soon found the Supreme Council of Armed Forces (SCAF), which took power in Mubarak’s wake, to be a barrier to, rather than proponent of, freely reported news.

Opposition seems to run in Kamel’s family – she comes from a long line of revolutionary women. Her grandmother was amongst those who rose up against the British in the Egyptian Revolution of 1919 and her mother continued to pursue her education after having kids, a practice highly unusual in Egypt at that time.

Born in 1962 in Cairo and raised in what she calls “a traditional Egyptian family,” Kamel attended a French all-girls school in Egypt. Though her father tried to limit her interaction with boys, her mother decided to take Kamel to a public cultural center when she was a young girl. It was here that Kamel first saw across the divisions of Egyptian society.

Her ability to see across barriers has only grown with time. Raised Muslim, she supports anti-sectarian stances, and is often seen wearing both the crescent of Islam and the Christian cross around her neck – though this liberal worldview did not come without consequences.

“I remember my father was against me all the time,” Kamel said.  Even little things, like crossing her legs, brought trouble. “[My father] told me I’m not polite,” Kamel said. “I think I am a free soul. But I suffered because he criticized me always in public and it was very not easy, [it was] very hard. And in my pre-adolescence I took the decision, I will stop contact with him, I will isolate myself from the family, because it hurt me to [have my father] criticize me.”

Free-spiritedness continues to run in the family; Kamel’s daughter, currently in her final year at American University of Cairo, has never been shy to challenge her mother. “She’s against me all the time,” she said of her daughter, laughing. “[My daughter said,] ‘I can’t be a member of your campaign just because I am your daughter.’”

To Kamel, this is the sign of a job well done. “I think it’s very healthy to be independent,” she said.

And Kamel is nothing if not independent. To watch her navigate a press conference or a crowd is to see an individual who knows what direction she needs to move, and when. She is decisive.

Journalism was not where Kamel always pictured herself, rather something she fell into, “by coincidence, par hazard.”  A self-described “shy girl,” Kamel never thought herself to be a “to be a media person at all…just I try always to know the truth,” she said.

Her legacy is testament to this; from 1992 to 1998, she was the presenter of a call-in radio show, “Eterafat al Layali” or “Nighttime Confessions,” in which people called to share their stories on air. Kamel used the show to expose the lesser-known side of Egypt, to broach otherwise off-limit topics, such as AIDS, troubled family relations, and sex, which eventually got the show booted from the air when there were complaints that it contradicted the traditional values of Egypt.

While some in Egypt dismiss her as better known to the international news than to her own people, for many of the Egyptians that she has reached the impact has been significant.

Noha Gamal, a young, female university student, sees Kamel as a pioneer and example for women across Egypt. “I think that Bothaina has all the qualities [for a presidential candidate],” Gamal said. “She’s actually a hope for many women who want to try to do something like [run] for higher positions, for positions that we say are only for males or only for guys. I think it’s a new way, a new path to pave the way for women to [also have] positions in leading … I think that Bothaina is a role model for every girl who is hoping to be like that.”

Kamel’s own role models are a regular ‘who’s who’ of greats, a quick rattling-off of Mother Teresa, the Prophet Mohammad, and Jesus Christ as her top three, with Nelson Mandela and Gandhi following shortly thereafter. “But I haven’t [role] models [in] politicians,” Kamel said.

It is unclear whether Kamel herself will ever become a significant political player in a country where male politicians dominate; when asked if she will run for office the next time around, she turns to a friend to ask what he thinks. He shrugs, nods. She jokingly grimaces, but then smiles in a way that might imply it is not entirely off the table.

Kamel is not stepping out of the limelight just yet. While she says she prefers to maintain a “low profile,” she remains determined to connect to and communicate with a wider audience, “through Twitter, through [the media].” Most importantly, Kamel said, “[Egyptians] must create our independent media.”

She has also remained active in the political scene; Kamel recently joined the National Coalition for Change, the political party of leading reform politician, Dr. Mohamed ElBaradei, even though she believes that people who would have voted for her likely turned to the secular, socialist-leaning Nasserist candidate Hamdeen Sabbahi.

On the precipice of these presidential elections, Kamel recognizes how definitive this time is in Egypt. No matter who wins, she says, “we’re writing our own history.”