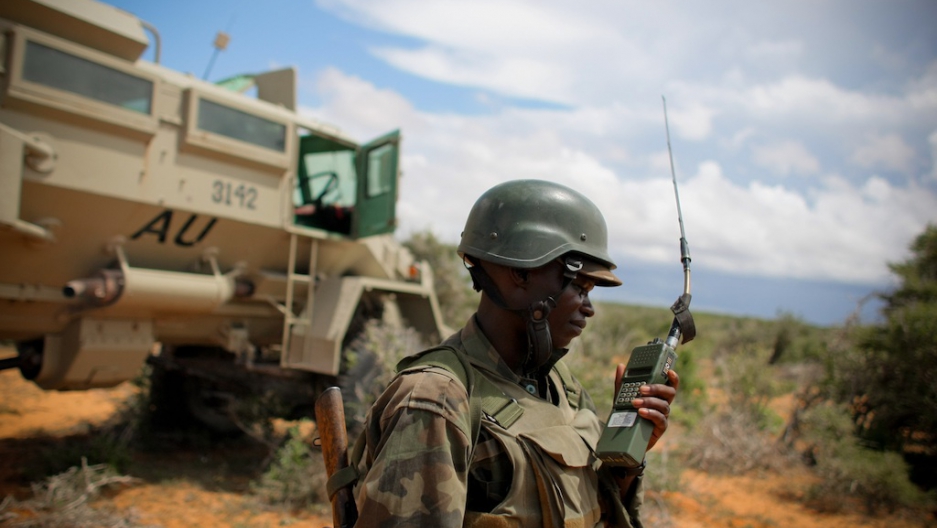 A field commander serving with the African Union Mission in Somalia (AMISOM) walks in front of an armored personnel carrier on May 22, 2012, during a joint AMISOM and Somali National Army (SNA) operation to seize and liberate territory from the Al Qaeda-affiliated extremist group Al Shabaab in the Afgoye region west of Mogadishu.
Credit: Stuart Price
Share

NAIROBI, Kenya — African Union forces in Somalia announced on Friday that they had taken control of  Afgoye, a town 18 miles outside the capital Mogadishu, after a three day offensive against Islamist insurgents who have used the area as a headquarters.

The military operation to oust Al Shabaab from their Afgoye stronghold was a tricky one because the area is also home to as many as 400,000 displaced people who live in temporary shacks either side of the main road. The UN refugee agency said that 6,200 people had fled their homes during three days of fighting over Afgoye.

Speaking in the Kenyan capital Nairobi the UN's top official for Somalia, Augustine Mahiga, underscored the strategic importance of Afgoye, and the difficulties of military operations in such a densely populated area.

"Afgoye is a military and a humanitarian imperative. It is the current headquarters of Al Shabaab. It controls the exit and entry to Mogadishu. At the same time it is home to over 300,000 [internally displaced people]. So the dilemma is, do you carry out this military operation when there are this many civilians?"

AMISOM has a military mandate from the UN Security Council.

"It is one of the most difficult military operations [AMISOM has undertaken] in an area with the highest concentration for displaced people in the world," Mahiga said.

As the capture of Afgoye by AMISOM forces appeared complete on Friday there were few reports of civilian casualties.

Describing Afgoye as "an area of operation and preparation" Mahiga said that he hoped evicting Al Shabaab from the town would severely curtail the group's ability to launch suicide attacks, plant improvised explosive devices (IEDs) and fire mortars into the capital and help make Mogadishu safer still.