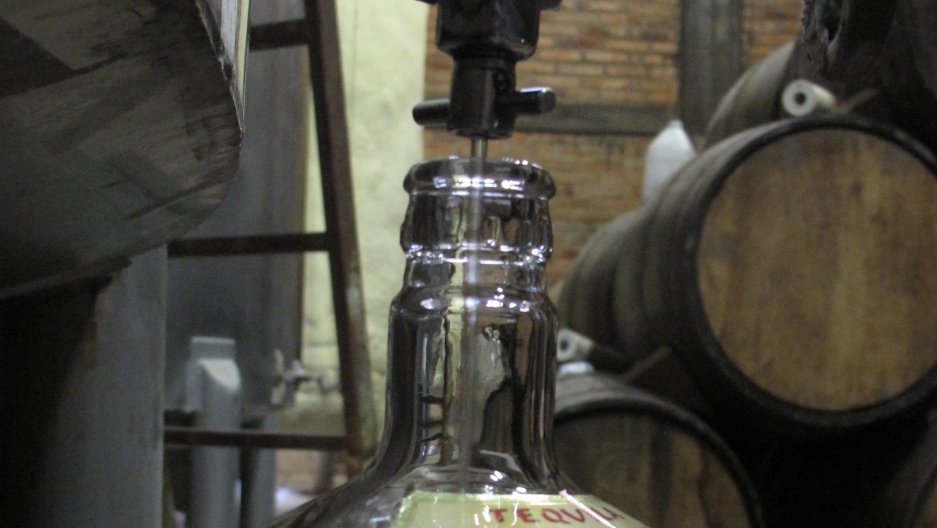 JALISCO, Mexico and NEW YORK, New York — Standing in front of an industrial-sized oven, Francisco Villalobos watches gooey, golden amber hunks of roasted agave plant run up a conveyer belt. Water drips over the gears of a crushing mechanism that squeezes out the sweet nectar, leaving behind fibers of brown husk. Men in blue coveralls sweep up the refuse fibers from the ground.

The Sangre de Azteca (Aztec Blood) distillery is located in the mountainous state of Jalisco, in the heart of Mexico’s most important tequila producing region.

Sangre de Azteca produces 9,000 bottles (1 liter on average) of pure, unadulterated tequila a day. Before it’s bottled, the liquid is aged in used bourbon barrels for between three months and five years.

Across the globe, demand for Mexico’s high-quality tequila is growing and expert craftsmen, like the ones at this distillery, are finding new markets for the drink.

In ancient Aztec society, agave-based spirits were reserved for royalty. Commoners were only allowed to imbibe during special festivals. In recent decades, however, spirits made from the tough, basketball-sized hearts of Mexican blue agave, fell out of favor with the country’s elite — and caught on with the working class.

Abroad, tequila may be known as Mexico’s spirit par excellence, but many late-career professionals prefer to sip on glasses of Scotch whisky rather than imbibe homegrown varieties of liquor.

That is changing now as young professionals and hipsters hanging out in Mexico City and Guadalajara, the capital of Jalisco state, are developing refined palates for the drink.

A two-part trend is at work. Producers are improving their techniques and are becoming better at targeting new consumer markets. The strategy has found some success. Last year, Mexico exported more than 163 million liters of the agave-based alcohol, mostly to the United States, according to figures from the Mexican government. That’s almost triple the amount the country exported in 1995.

Jair Tellez, the chef at Merotoro, an upscale Mexican restaurant in Mexico City’s trendy Condesa neighborhood, has observed this trend. “The new interest in tequila is seen most clearly in the United States,” he says.

A closer look at Mexico's production numbers shows it's not just quantity that's up, but quality too. In 2001, more than 80 percent of tequila produced in Mexico contained low-grade blends, according to government figures. That has turned around substantially. In 2011, almost 60 percent of the country's tequila production was 100 percent agave.

The boom is not just some spring break shot binge or middle-aged margarita madness. A growing interest in high-end spirits has helped usher artisan tequilas onto menus in upmarket restaurants from New York City to Denver and Los Angeles.

Take Zengo, a chic Latin-Asian fusion restaurant in midtown Manhattan. The restaurant is owned and operated by Richard Sandoval, a high-profile Mexican chef with over 30 restaurants in cities across the United States. All of Sandoval’s restaurants serve tequila, but Zengo is particularly unique. After opening two years ago, it now showcases more than 400 bottles locked in cabinets in its underground tequila “library” — considered the largest tequila selection in New York City.

Patrons at small, dimly lit tables studiously taste “flights,” samplings of assorted tequilas. These are prepared by Courtenay Greenleaf, who refers to herself as a “librarian” rather than a sommelier. She designs the pairings to teach patrons about the effects different types of wood aging barrels, different varieties of agaves, and different distillation processes have on flavor.

Mass-market tequilas — the stuff gulped down in shots and sugary mixed drinks by the likes of US college students and that are known to leave a wicked hangover — are often called “blancos mixtos.” They’re blends of agave juice and sugar cane that are aged for between one and three months.

“There are a lot of people … who have had bad experiences with tequila, doing shots in college” who are giving the beverage a second chance, Greenleaf says.

That second chance has been reaching higher up the shelf to the likes of Patron. The Patron brand controls upwards of 70 percent of the United States' ultra-premium tequila market, estimates Patron Spirits spokesman Greg Cohen.

High-quality bottles are often amber-hued, 100 percent blue agave, refined and aged to perfection. Aficionados say the sipping tequilas are smoother on the palate and easier on the body — in moderation, of course.

And in tequila, age is more than just a number. Amber-hued “reposado” tequilas sit in wooden barrels for up to a year. More expensive “añejo” varieties are aged for up to three years. For its 250th anniversary in 2009, the Jose Cuervo brand marketed a blend that allegedly included at least a few drops of 250-year-old tequila.

However, aficionados say that any tequila aged for more than five years will taste more like wood and smoke than agave.

Discerning consumers also take note of origin. Agave grows largely in the hills of Jalisco, in western Mexico, where rich soil, warm days and cooler nights provide a hospitable environment for the plant.

“It plays with the acidity [and] develops a higher sugar content. What that does is impart citrusy, sweeter nuances, floral nuances,” Greenleaf says of the habitat’s impact.

Sophisticated drinkers look for a wide range of qualities, from floral to smoky to sweet. Some also detect notes of grapefruit and sweet cigar tobacco in tequila.

And there are other flavors. Greenleaf dips into the vast collection. “Casa Noble, aged in a new French oak barrel, imparts a vanilla flavor,” she says, pointing to a stem-less glass filled with dark amber. “It’s triple distilled,” she adds.

Then she points to another.

“This [tequila] is aged a little over two years in a used cognac barrel. After the first sip you get the heat … notes of cinnamon, pumpkin spice, custard. What’s great about it is it’s a heavier weight — syrup,” says the tequila librarian.

“I think it would be fun to pour that on some pancakes.”