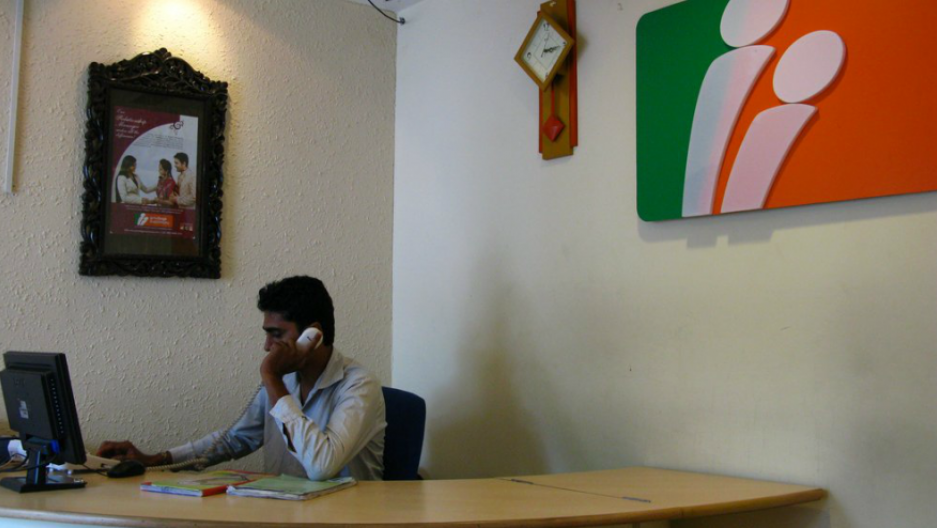 Even at online dating sites, like the one that runs this office, TamilMatrimony.com, inter-caste dating is very rare. (Photo by Patrick Cox.

Editor's Note: This is one part of a series of stories from PRI's The World examining global issues of class. For more stories on this topic, visit TheWorld.org.

Off a busy street in downtown Chennai, there’s a small store belonging to TamilMatrimony.com, an Indian company that promises to help you find your spouse online.

The store is meant to draw in Indians who don’t use or can’t afford computers. Clients sign up in person and take home print-outs of the profiles they’re interested in. Find a good match, and they can set up a meeting.

Janakiraman operates a range of localized marriage sites across India, including Gujurati Matrimony and Punjabi Matrimony. In all, the businessman claims about 20 million Indians are currently using his services.

And so, he argued, his ‘Matrimony’ sites are creating a healthy future for the whole country.

The model is familiar to anyone who’s been online dating in the United States: you make a series of selections to narrow down your search. The Indian matrimony sites offer countless drop-down menus covering things like eating habits, religion, income and caste.

At the Tamil Matrimony store in Chennai, a young woman named Darshani looked over profiles of men, accompanied by her mother. They were searching for the right ‘alliance,’ as they say in India.

“Based on my mother’s gut feel,” Darshani said, “an alliance will be set within three months.”

Darshani is a 24-year-old computer engineer; she’s also got an MBA. In other words, she’s the epitome of India’s young, and growing, professional class. In the store, a ‘relationship manager’ named Abishek Kapoor was on hand to help out.

“Definitely she’s looking for somebody who’s equivalent or higher than what she is,” he said. “A person who’s well-settled, a person who’s earning well so she can feel secure.”

“They belong to a particular community, so they feel that going to another community will not match their values and culture," Kapoor said.

Darshani herself said she would prefer an inter-caste marriage, but her family would not allow it. That’s typical, said Kapoor: families want the same caste.

“They don’t want differences, because in India it’s a very diverse [country]. So each and every community has their way of doing things,” he said.

Their way of doing things. That’s the argument for same-caste marriage that Janakirama makes too. It’s about removing friction in a relationship, simply reducing the chances of two people having uncomfortable differences of opinion. Caste as an indicator of commonality in terms of things such as food, tradition or culture.

Others, though, suggest that these caste lines might actually mean deprivation or a hindrance to professional advancement.

"No, I think that [there’s] nothing wrong as long as people are understanding that caste is only about the culture," he said. A "way of doing things.”

Caste, said Janakiraman, is not about social status any more. But that take on the system is a privilege of the few. In fact, the higher up India’s social ladder you go, the easier it is to pick and choose which aspects of caste matter to you. In fact, at the very top of the ladder you find a group that’s now able to leave caste behind altogether: the new super-rich, India’s millionaires. People, in fact, like Janakiraman himself.

India’s rich and affluent as a caste – and a class – by itself. For those people, it doesn’t matter how high or low a caste they were born into: money trumps everything.

But for others, and for the modern India that sites like TamilMatrimony.com are claiming to build, caste remains a fundamental force.