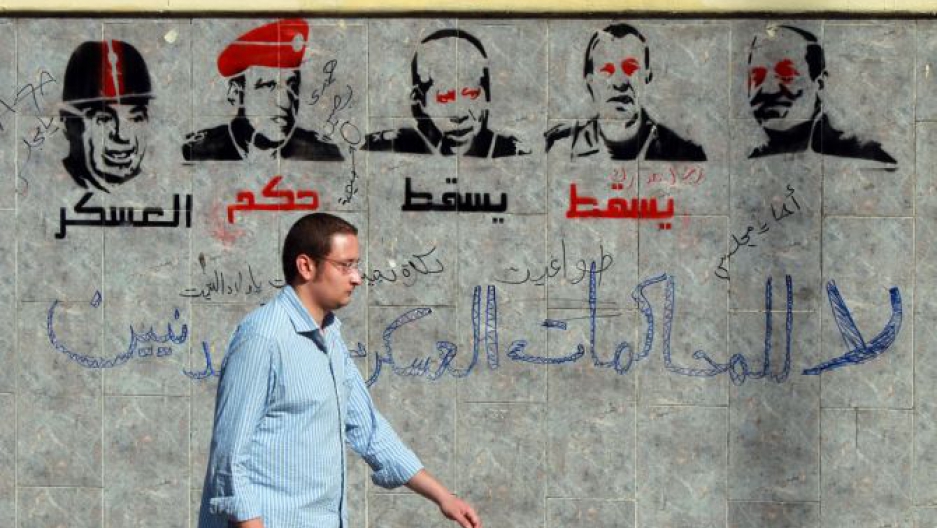 An Egyptian man walks past graffiti depicting members of the military council and reading 'Down with the military rule, no to military trials for civilians' near the defense ministry in the Abbassiya district of Cairo on April 29, 2012.
Credit: Khaled Desouki/
Share

CAIRO, Egypt – Egyptians are headed to the polls in a historic election to choose their first-ever civilian president. But with a constitution yet to be written and a parliament still struggling to breathe under the grip of military rule, just how much power will Egypt’s new leader have?

The president-elect, whether Islamist, secular, or of the old regime, will be forced to navigate often-competing constituencies, including Islamists trumpeting the role of sharia law, the wary Coptic Christian minority and Egypt’s stalwart labor movements.

But of all Egypt’s constituencies of power, none is greater than the Egyptian military, the institution from which every modern Egyptian leader has emerged and the venerable power base which has presided over the ongoing transition between the revolution that toppled Hosni Mubarak and the election set to get underway on Wednesday.

How the newly elected president approaches a relationship to the military and to what extent he seeks to challenge its sprawling and secretive financial empire will in many ways give shape to Egypt’s nascent democratic state for years to come.

Few of the front-running candidates for Egypt’s top post – including the secular, old-guard Amr Moussa, independent Islamist Abdel Meneim Aboul Fotouh and the Muslim Brotherhood’s Mohamed Morsi – are so far willing to publicly challenge the clout of armed forces, still highly revered by many Egyptians.

On Thursday, less than a week before the election, local media reported that the ruling Supreme Council of Armed Forces (SCAF) would issue an amendment to the constitutional declaration voted in last year that will define the powers and duties of the incoming head-of-state.

More from GlobalPost: 'The Army, The People...' Egypt's Continuing Revolution

Former Brigadier-General and independent military analyst Safwat Al Zayyat said, “There is no real history of a relationship between the military on the one hand and the executive on the other, because they were always both derived from the same entity.”

That era ended in February of last year when hundreds of thousands of Egyptians took to the streets in protests that ultimately led to Mubarak, an Egyptian Air Force commander brought to power after the assassination of Anwar Sadat, stepping down after 30 years of rule.

“The military institution has largely determined the actions of the executive branch, and in return, the regime gave the army a lot of leeway,” Al Zayyat said. “Allowing them to pursue economic projects and leaving certain civilian positions open for military figures.”

Indeed, Egyptians had hoped their 2011 popular uprising would usher in a new era of civil, democratic rule.

Protesters in Cairo’s iconic Tahrir Square, the symbolic epicenter of the revolt, initially welcomed with enthusiasm the military as it rolled into the capital’s streets in battle tanks. Its field commanders and soldiers on the street vowed not to fire on the unarmed demonstrators.

More from GlobalPost: The 'black box' of Egyptian military power

Chanting, “The people and the army are one hand,” the activists were hopeful the military was on their side in the fight against the regime.

But soon after SCAF assumed control during the revolution, protesters’ hopes for a fresh regime – free of the corruption and widespread torture of the Mubarak period and finally answerable to the Egyptian electorate – were dashed.

Since it seized the helm as Egypt’s caretaker government, the military has cracked down on protesters, killing scores of civilians in the last year. It has co-opted state institutions, including the powerful state-run media and, some analysts suspect, the judiciary, to solidify its rule and ensure its privileges and exceptional status are enshrined in any new state.

It has also significantly bolstered the number of civilians it tries in military courts – over 12,000 according to No Military Trials, a watchdog and advocacy group here – a judicial venue that eschews basic due process rights and offers no right to appeal, Human Rights Watch says.

SCAF generals have made clear they will not cede any ground of their lucrative business ventures – spanning from arms manufacturing to tourist resorts – that has linked them to profitable networks of transnational capital and given them an unprecedented grip on as much as 40 percent of Egypt’s economy, observers say.

In this environment, a civilian head-of-state will be faced with a near-impossible gamble: tussle with a politically emboldened military with unrivaled influence and break its stronghold over the country, or allow the army to solidify and prolong its rule as an enduring kingmaker of Egyptian politics.

Moussa, Morsi and Aboul Fotouh have each said they anticipate limited oversight of the defense budget by a so-called ‘special committee’ in parliament.

More from GlobalPost: The money behind the Egyptian military

But the people’s assembly remains enfeebled by military rule, which has always operated as a black box, not even allowing its financial accounting to fall under a national budget or to be scrutinized by any form of governance.

“The army must go back to its normal role as defender of the nation, and it should not have this kind of economic control,” Karim Radwan, a member of the executive committee of the Muslim Brotherhood’s Freedom and Justice Party in Cairo, told GlobalPost last month.

Aboul Fotouh, a centrist-Islamist candidate who broke from the Brotherhood last year to run for the presidency, has been the most outspoken of the presidential front-runners, calling for an end to all military trials for civilians, and saying that as president, he will retain the right to appoint a civilian minister of defense.

Moussa, a former minister of foreign affairs appointed by Mubarak, is now leading in the polls. But he has failed to publicly criticize army rule or the military’s business ventures.

“Whoever is elected, and who SCAF accepts [as president], will be made aware of the balance of power between the president, the army and its rulers,” said Amir Salem, a human rights lawyer and longtime activist. “The transition has not yet reached a point where the president can act as a strong, independent entity.”

Mubarak, despite his longstanding ties to the military, forged for himself a strong, semi-independent presidency that led to a complex relationship with the armed forces during tenure.

Because an Islamist cell within the army gunned down former President Sadat, Mubarak sought to curtail the military’s power by crafting his own extensive police state.

He strengthened the police and domestic intelligence services as paramilitary forces loyal to him, numbering more than 400,000, according to figures from the International Institute for Strategic Studies (IISS), a leading British think tank on security and military conflict. The military maintains a similarly sized force, with more than 350,000 active personnel, IISS says.

But now, lacking the support of Mubarak’s domestic security apparatus, any successful presidential candidate would find it difficult to move politically against the military.

“They [the army] will want to have continued influence over the state as a whole,” said Robert Springborg, professor at the Naval Postgraduate School in California, and expert on the Egyptian military.

“Parliament remains weak, the court system has been further weakened,” he said. “There aren’t too many allies in the state itself that the president would be able to draw on against the military.”

Egypt’s civilian institutions may not yet have the tools or the influence to curb military dominance, but others are optimistic, calling the election of a civilian president a step in the right direction.

“It will take time to implement a system of checks and balances,” said the retired Brigadier-General Al Zayyat.

Under Mubarak, the regime allowed for the limited operation of certain NGOs and think tanks, some of which were either run by or linked with the government.

“The army must accustom itself to subordinating itself to a civilian authority,” he said. “It is no longer sacrosanct.”