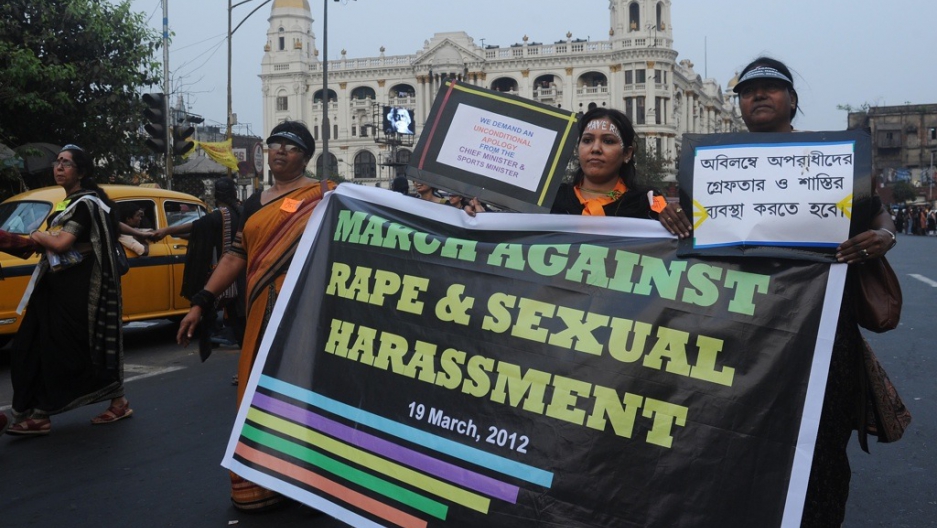 Women's rights activists hold a banner as they march during a rally in Kolkata, India on March 19, 2012. The rally was organized to protest against the recent physical assaults and rape on women, and also as a demand for a proper rule of law for women's rights.
Credit: Dibyangshu Sarkar
Share

NEW YORK — “You are forcing me,” cried a 17-year-old South African girl with a mental disability who was filmed while being raped, as several men and teenagers taunted her anguish and laughed at her pleas. The video spread across the internet like wildfire, inciting outrage and, sadly, ridicule.

After the rape, the group tossed her the equivalent of 25 cents in exchange for her silence. They abandoned her, taking her dignity with them in the form of a cell phone video. The video of her rape then swiftly passed through the hands of schoolchildren in Johannesburg’s Soweto township.

Four weeks later, after the video had become an internet sensation, the police found her with a 37-year-old man. Police suspected that he had kidnapped her after the rape and held her captive as his personal sex slave.

Apparently this was not the first time the girl’s plight was ignored. She had been raped twice before, in 2009 and 2010. The first case went to court, but was dismissed after the girl was deemed too “confused” to explain her side of the story to the judge. Following this incident, her mother pleaded with social welfare services to place her daughter in a home where she would be safe. They ignored the request, and her daughter was raped again.

“They failed me,” the mother told CNN. After all the publicity over the video, the government finally found a placement for the girl in a safe home.

These crimes are rarely reported, and when they are, criminal justice systems and social services often fail to respond adequately. Women and girls with disabilities remain invisible and ignored.

Stereotypes and myths abound regarding women and girls with disabilities and their sexuality. They are often perceived to be weak, unwanted or asexual, making them more vulnerable to sexual violence. Some attackers consider it a favor to women and girls with disabilities, presuming that they could otherwise not have sex; worse, some attackers don’t even see them as human beings.

Stigma, coupled with physical and communication barriers, makes it more difficult for women and girls with disabilities to seek justice after these abuses. They often have little or no access to police, legal counsel, and courts for protection. As the Human Rights Watch research in northern Uganda found, community-based victims’ service agencies, including sexual abuse programs, shelters, other crisis programs, and police departments, often don’t have the capacity to adequately serve women with disabilities.

Women and girls with disabilities who are victims of rape or sexual assault also often have less access to medical services, including psychological and social counseling and preventive care, than their non-disabled peers. Programs aimed at the prevention of violence against women and girls rarely explicitly include or reach out to women with disabilities, in particular those with mental or intellectual disabilities.

Governments and service providers need to target efforts to include women with disabilities in sexual and gender-based violence prevention and treatment programs. This might involve providing transportation for women with disabilities to clinics, making services accessible for women with various disabilities, providing ramps for those in wheel chairs. Easy-to-understand information, the training of health care workers and law enforcement officials, and developing programs to combat stigma, are improvements that would make a difference. Yes, it might take extra effort, but that doesn’t give government a pass to ignore the need.

The seven suspects, aged 13 to 19, arrested for the rape of the young South African girl, will face prosecution in May and June. A successful prosecution — fair, credible and public — could mean that at least one member of this invisible population will see justice done.

But it should also put governments around the world on notice that what happened in South Africa is also happening in their countries and that they need to do something about it. Basic decency and respect for human rights should propel them to take steps proactively, not in response to a viral video.

Shantha Rau Barriga is the researcher and advocate for disability rights at Human Rights Watch.