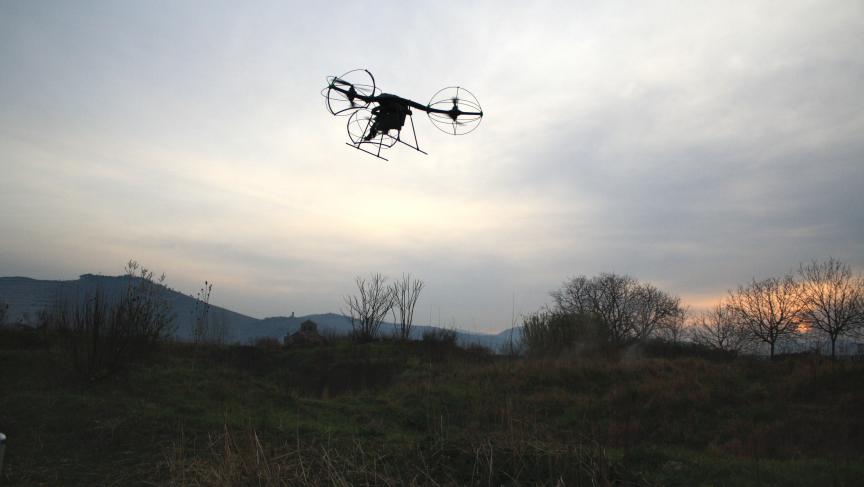 StillFly hovers over a stretch of land in the Naples countryside where, more than two decades ago, the Camorra mafia buried two trucks carrying toxic waste. (Photo by Angelica Marin.)

Treading through marshes at dawn, Massimiliano Lega, an environmental engineer, is careful not to disturb the ground.

As he walks, fumes escape from cracks in the earth. There’s a choking stench of gas, bleach and burnt tires.

This is the Naples countryside. Two truckloads of poisonous junk are buried here, just below Lega’s sneakers. He blames the Camorra mafia.

Lega points his thermal camera at any smoking groove, as guard dogs bark from a distance.

Lega is here testing his latest creation. It’s called StillFly — a three-winged, five-pound, battery-powered drone that flies a few feet above the ground. The drone’s heat-sensing camera and gas sensors transmit data to a monitoring station, where Lega studies the images. It's sensors were designed to work as a small, portable lab.

“It’s like forensic police on the scene of a murder but re-adapted for environmental crime,” Lega said.

StillFly is now being tested to zero-in on riverbeds, farmlands and industrial sites in several areas in Italy, according to Forest Ranger Marco Di Fonzo. He says this kind of technology could be much more economical and effective than doing surveillance in a helicopter.

In this region, environmental surveillance often leads back to organized crime.

No one knows this better than Donato Ceglie, a prosecutor who’s been investigating mafia environmental crimes since the late 1990s.

Ceglie says Italian companies from the north contract with the Camorra to dump their waste in the Naples countryside, cutting their disposal costs by up to 90 percent. Ceglie says StillFly can provide the evidence to nail eco-criminals in court.

“With a drone, you can detect a source of pollution, the route and the effects of that pollution,” Ceglie said. “It’s very solid evidence that holds up in court.”

StillFly has already helped put a few polluters to trial — a farmer accused of channeling buffalo waste into a river and a mozzarella maker who allegedly dumped tanks of whey brine. The unmanned aircraft also spotted a cargo ship rinsing out its tanks in the Gulf of Naples by night.

And now, StillFly’s discovery of the two trucks buried in the polluted countryside has triggered a new investigation.