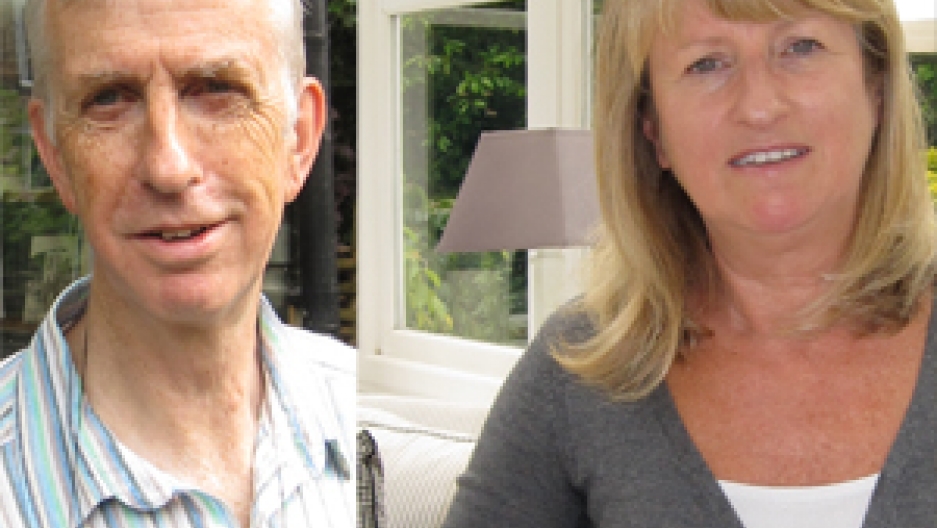 Lesley Ebbetts and David Ward were born in 1946 within a few days of each other and a few miles of each other, in similar social circumstances.

“I was the eldest of two daughters so I was their first born,” Ebbetts said. “They'd waited a long time for me because of the war.”

Ebbetts' family was working class. Both her parents left school at fifteen, as soon as they could get factory jobs.

“My dad left at thirteen, and missed a lot of school because he didn't have shoes because it was the Depression,” Ward said. “His dad was a piano tuner, and people were burning their pianos during the Depression, not hiring people to tune them.”

Ward and Ebbetts are both participants in a public health study of more than 5,000 Britons, all born in that same week in 1946.

They have much in common. They went to state-run elementary schools in or near London.

“I was quite happy there. Very happy there,” she said. “I became quite good at reading because I remember instructing the others in groups. But it all came crashing round the ears at eleven.”

What came crashing round the ears was an exam, an exam that had recently been introduced by the British government.

“The Eleven Plus came along, and it's been the bane of my life,” Ebbetts said.

David Ward remembers the day he took the Eleven Plus exam.

“Looking back now it was certainly the biggest single determinant of my future,” he said.

He knew at the time that if he passed it, he'd be among the chosen few, plucked from the working classes to be enrolled in an elite government-run school—and likely college after that.

Ward says that's what he was thinking about as he walked into a grand, unfamiliar building on the morning of the exam

“It's a great classical fronted place with big steps and a colonnaded portico,” he recalled. “And there's you in your eleven-year-old little shorts and funny shoes and shirt going in to take this exam at this place. And it was daunting. You knew that a lot was to happen on this day, and that a lot hung on what happened on that day.”

Ward and three others in his class of sixty passed the exam. They had earned themselves places in what in Britain are called grammar schools.

At his new school, Ward was exposed to many new things and new people, including a teacher who drove a flashy car and lived in central London.

“We were going to see a play in Greek at a place near him so he invited us for ‘supper’,” Ward said. “And I didn't know what ‘supper’ was. So we all turned up…and he was playing Handel sonatas on his stereo. And this supper included olives, which I'd never seen before. And so you were in this amazingly sophisticated atmosphere. And he gave me a glimpse of another world.”

Ward liked what he saw. He went to college, and then became a reporter. That turned into a career at the respected national paper, The Guardian.

A generation before, that path might not have been open to a working class kid. But now, the route from humble beginnings through the Eleven Plus, grammar school and on to college was laid out.

Many people took it. Among the most prominent: five British Prime Ministers, including Margaret Thatcher.

The Majority that Failed

For all the benefits of the few who passed the Eleven Plus, what about the others, the majority who failed?

They were sent to schools called Secondary Moderns. The British government tried to explain its new two-tiered school system in public service announcements:

“Well now Janet, you've come to the secondary school. Secondary modern school, you know that is what it is called don't you?”

“Yes, we were rather sorry Janet failed the Eleven Plus.”

Most parents didn't buy that argument.

Secondary moderns quickly became viewed as places where ungifted children ended up, where they were housed until they were old enough to go to work.

That's how Lesley Ebbetts saw it.

“We weren't really educated to become anything more, whereas I think at grammar school you really were,” she said.

Ebbetts didn't go onto university.  Virtually no-one did from her school. But she did become successful. She got a foot in the fashion industry, and started writing articles for the popular press, and doing spots on the radio.

“I found out where [Mick] Jagger was getting his boots or whatever it might be,” she said.  Then she would talk about it on the radio.

“Everybody lapped it up,” she said.

Ebbetts got a job on a magazine called Rave, moved to fashionable Chelsea and bought an Orange Mini.

“It was two fingers to those who called me a failure at eleven,” she said.

“Two fingers” is the British version of the middle finger.

And yet, Ebbetts couldn't shake the feeling that she'd been denied an education, and a certain type of life. She was making money, but in Britain, class is about more than money.

Had she passed the Eleven Plus, and gone on to grammar school and college, she thinks she would have risen to a more respectable career.

The Long Tail of the Eleven Plus

Even now, failing the Eleven Plus plagues Lesley Ebbetts.

“If one suffers a major rejection or a major bereavement, I'm back with it again,” she said. “I'm dealing with how to deal with failure again, with another therapist.

In the 1970s, long after Lesley Ebbetts and David Ward had left school, Britain stopped requiring students to take the Eleven Plus exam, and got rid of most grammar schools.

The two-tiered school had become unpopular.

The majority of kids were failing their exams and going to secondary modern schools. And many parents thought the system was unfair.

Compounding this was research showing that the Eleven Plus exam was culturally biased in favor of the middle and upper classes.  The government responded to the public outcry and made the Eleven Plus optional.

But just when grammar schools were being phased out, social mobility began declining.

Was it the Eleven Plus exam and grammar schools that made the difference?

Oxford University sociologist Adam Swift has studied this issue. He says that Britain was undoubtedly more socially mobile in the days of grammar schools.

“It is true that if you went to a grammar school, you're certainly likely to have done better than to a secondary modern,” Swift said.

But he says when it comes to Britain's poorest children, only a tiny fraction passed the Eleven Plus and went to grammar schools.

And even for those who did and climbed up the socio-economic ladder, they fell short of the very top.

“So there was no real kind of boost to mobility up into the top quarter although it did help you get into the top half a little bit,” he said.

But this is not the prevailing view among a new generation of politicians. Many now believe that the Eleven Plus and grammar schools were the key to Britain's golden age of social mobility.

They believe that the smart working class kids of today no longer have a pathway to success. And so, the two-tiered system is gradually coming back.

Britain's Conservative-led government has made it easier for Britain's few remaining grammar schools to expand.

The Return of Grammar Schools?

In April 2012, the first grammar school campus to open in decades was approved.

That's not something that Lesley Ebbetts welcomes. She says she'd hate to see the old system come back with many poorer kids denied a good education.

Fifty-five years after she failed the Eleven Plus, Ebbetts says she's grateful only that she and a handful of others transcended that failure.

“So we made it in the end—some of us—but I think that an awful lot were completely wasted,” she said.

He knows he was one of the few beneficiaries of the system. But he doesn't think it really worked.

Broadly speaking, he says, the rich have stayed rich and the poor have stayed poor, despite a school exam that was designed to change that.

“The whole history of this thing seems to me to prove that that gap never narrows, that every step that you make to improve the lot of the poor or the people who've missed out on education, nothing much has changed. Which is a bit chilling to think of really, after all that time,” Ward said.