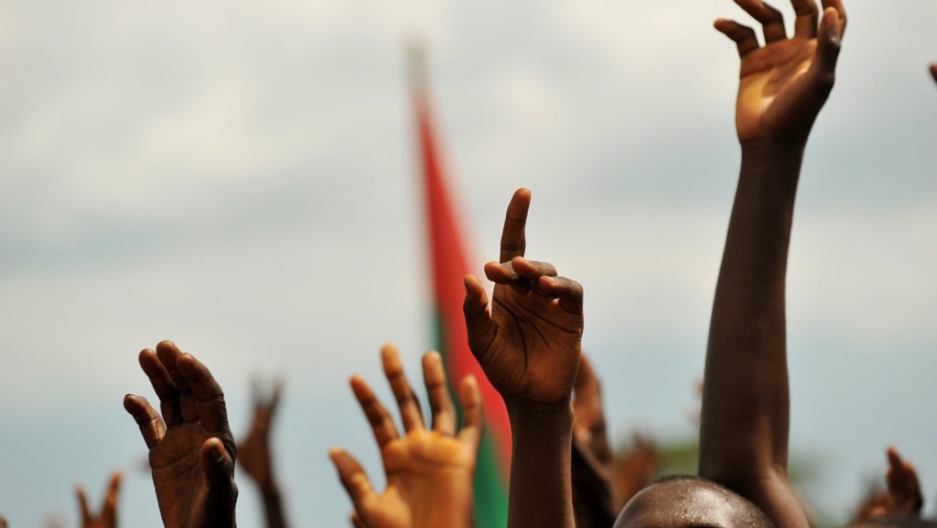 Supporters of Burundian President Pierre Nkurunziza raise their hands during a political rally in the town of Rugombo in northern Burundi on May 14, 2010. Does Nkurunziza really enjoy popularity with 89 percent of Burundi's people, or are they just too afraid to say?
Credit: Roberto Schmidt
Share

BOSTON — Africa has a reputation for dictators and coups, so you would think that most Africans are unhappy with their leaders.

But that’s not so, according to a new poll of 34 sub-Saharan African countries by Gallup. Most African leaders received surprisingly high approval ratings, getting significantly higher scores than US President Barack Obama, currently at 47 percent, or British Prime Minister David Cameron, now at 44 percent.

Eight African leaders enjoy positive ratings above 80 percent and another five have approval ranks above 70.

What accounts for this popularity of Africa’s leaders?

Just as in the US, it’s not only the rulers themselves. It’s the economy, and Africa’s economies are growing at an average of 5 percent right now so that puts a rosy glow on the leaders.

The leaders’ approval ratings are also a result of social conditions and the Africans’ confidence that their elections and legal systems are fair, according to Gallup.

The surveys took place in 2011 and in each of the 34 countries results are based on face-to-face interviews with 1,000 adults. Gallup classified adults as aged 15 and older, which seems a bit young. Gallup takes pains to show that its African findings are accurate.

“For results based on the total sample of national adults, one can say with 95 percent confidence that the maximum margin of sampling error ranged from plus or minus 3.3 percentage points to plus or minus 4.3 points,” asserts Gallup.

However some of the high ratings are suspect.

Look no further than the Africa’s most popular leader, Burundi President Pierre Nkurunziza, who was at the top of the survey with an 89 percent approval rating.
Nkurunziza and his party won elections in 2010 after all challengers boycotted the polls, charging intimidation and electoral fraud. Many opposition leaders have fled the country. More than 300 people have been killed in political violence since the elections, with few arrests made, according to Human Rights Watch.

Does that sound like a country where the president is wildly popular?

Burundi under Nkunziza sounds more like a place where people are too afraid to tell a stranger what they really think about their leader. In many repressive African countries citizens may be too fearful to give their honest opinions, and that may be a fundamental flaw in Gallup’s African surveys.

Mali President Amadou Toumani Toure was the third most popular African leader with a rating of 86 percent. But in March 2012, Toure was toppled from power in a coup. Toure was just a few weeks away from stepping down from power, after elections for a new leader. But Toure had become very unpopular in the military because widespread corruption prevented adequate food and arms from getting to soldiers fighting Tuareg rebels in Mali’s harsh northern desert. On March 22, angry soldiers protested and within a few hours they had stormed the presidential palace and Toure scuttled away, eventually to exile in Senegal.

That's an unexpected exit for a ruler with an 86 percent approval rating.

Related: Mali coup: a guide to the players

To be fair, Toure did enjoy a measure of popularity, but there was a widespread complaint of ineffective governance and rampant corruption.

Other ratings of African leaders appear to be more accurate.

Botswana’s Ian Khama, for instance, appears to have earned his position as Africa’s sixth most popular leader with an 81 percent approval rating. Khama, 59, has only been president for three years, but he has been well-known for years as the son of Botswana’s founding president Seretse Khama. Ian Khama has won popularity for being accessible, for making visits across the rural country and for establishing a special housing program which builds dwellings for the destitute across Botswana.

Khama, who spent years in the national army and rose to the rank of Lieutenant General, has also won respect for being outspokenly critical of neighboring Zimbabwean President Robert Mugabe. Khama has blamed Mugabe’s dictatorial rule for damaging the economies of the entire southern African region. Khama also charged that Mugabe has caused tens of thousands of Zimbabweans to flee to Botswana. It seems Botswanans like a president who tells it like it is.

Nigeria’s President Goodluck Jonathan also has an 81 percent approval rating. The genial Jonathan, who is known for wearing a porkpie hat, has only been in office for two years, during which the country has seen a dramatic increase in Islamic extremist violence from Boko Haram, in which 450 people have died already this year. Jonathan’s ratings are not going to stay so high if he can’t find an effective way to control the Boko Haram violence.

Further down the popularity ladder at the 19th rung is Liberia’s Ellen Johnson Sirleaf, who has a 65 percent approval score. She is finding it hard work to rebuild Liberia’s economy which was shredded during the civil war.

At number 20 is Kenya’s President Mwai Kibaki with a 62 percent rating, this seems an improbably high score for a leader whose government is widely criticized by Kenyans for corruption and ineffective rule.

Probably the most accurate rankings are found at the bottom.

Robert Mugabe, 88 and in power for 32 years, has an approval score of just 36 percent, which is most likely a reflection of Zimbabwe’s economic decline and widespread human rights abuses. Even with Mugabe’s repression, it seem Zimbabweans are so fed up that they will voice their disapproval. If Zimbabwe’s election, expected later this year, are anything approaching free and fair, Mugabe will lose. But most in Zimbabwe expect Mugabe to campaign with violence, as he and his Zanu-PF party have done before.

Next on the way down is Senegal’s Abdoulaye Wade, whose rating of 30 percent in 2011, was borne out in 2012 when he lost elections in his bid for a third term as president.

At the lowest point is Angola’s President Jose Eduardo dos Santos who has been in power for 32 years. For years his government has been criticized as corrupt. Even now, when the country is enjoying peace and a boom in its oil and diamonds, the average Angolan still mired in poverty and hunger.

These approval ratings for African leaders are little more than useful jumping off points for discussion. To better understand the African countries, there are many other surveys that are more illuminating such as economic studies and statistics on each African country’s living conditions in the UNDP’s Human Development Index, the level of free press in the Committee to Protect Journalists’ Censorship Index and the Corruption Index published by Transparency International.

Only by looking at the full picture of a country’s leadership, its economy, its social conditions can you get an accurate understanding of why the leader is popular, or not.