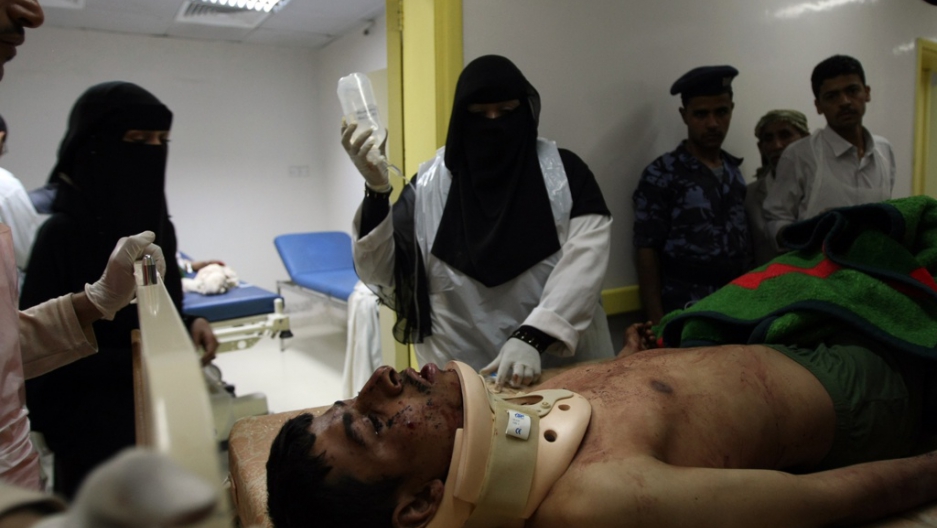 A Yemeni soldier is treated at a hospital in Sanaa after he was injured when a soldier packing powerful explosives under his uniform blew himself up in the middle of an army battalion in Sanaa on May 21, 2012, killing 96 troops and wounding around 300, a military official and medics said. The suicide attack was the deadliest in the country's capital since newly-elected President Abdrabuh Mansur Hadi pledged to oust Al Qaeda militants from Yemen's mostly lawless and restive southern and eastern provinces.
Credit: Mohammed Huwais
Share

NAIROBI, Kenya — In the aftermath of a suicide bombing of a military parade earlier today in the Yemen capital Sanaa that killed at least 96 people the official Twitter feed of Somalia's Al Qaeda aligned Al Shabaab insurgents offered its congratulations to Al Qaeda in the Arab Peninsula (AQAP) and its thanks to God.

"The Mujahideen in the Arabian Peninsula have just carried out a Martyrdom operation targeting a Military parade in San'a" wrote @HSMPress at 11.27 a.m. on 21 May.

"May Allah Grant victory to our brothers in the Arabian Peninsula in their war against the Kuffar and Murtadin," read a second tweet a minute later.

Clearly AQAP and Al Shabaab have a shared ideology, but what of their other links?

A UN group that monitors the implementation of the Security Council approved arms embargo on Somalia has reported numerous claims of weapons crossing
the Gulf of Aden from Yemen to Somalia.

In return, Al Shabaab has in the past offered to send fighters to Yemen to support AQAP. "We call upon all Muslims to give a hand to our brothers in Yemen and we, Al Shabaab, are ready to send them reinforcements," said a spokesman in early 2010. Some analysts suggest the two-way traffic is now well-established.

Beyond the rhetoric, the extent of operational or logistical links between the two Al Qaeda affiliates remains unclear. The most useful analysis so far has come from London's Chatham House think tank.

A research paper published 18 months ago noted the "parallel challenges" faced by Yemen and Somalia, listing them as "insurgencies, terrorism, economic
hardship, and ineffective governments that are perceived to lack legitimacy." It should be little surprise that similar social and political contexts give rise to similar forms or resistance but in its research Chatham House raises concerns about "convergence" between the two groups and about the disruptive role played by "foreigners" in both organizations, although it admits that evidence remains scant.

Here's a video of today's bombing in Yemen.