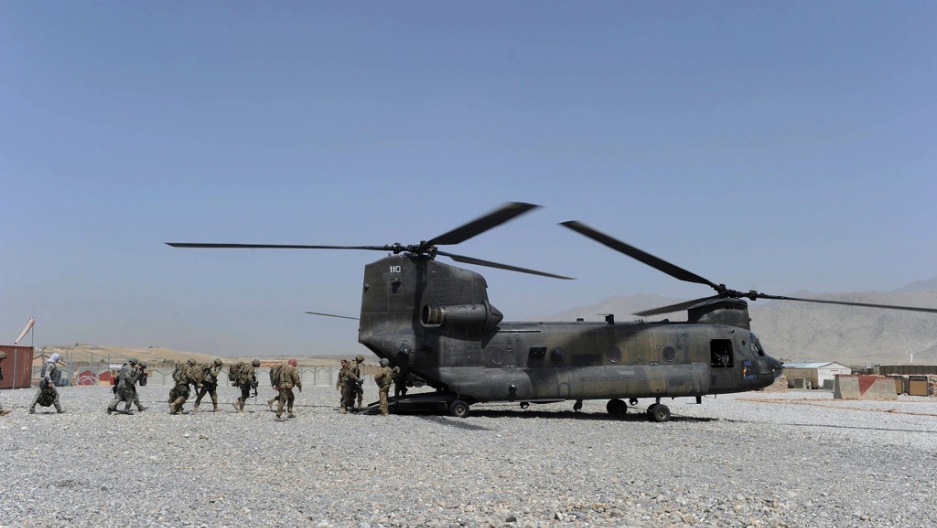 US soldiers board a military helicopter after a ceremony to hand over security in Mehtar Lam, Laghman province on July 19, 2011.
Credit: Shah Marai
Share

MEHTAR LAM, Afghanistan — They found him, 16-years old, a few meters from the town prison. He had been tied up with his own shawl, beaten, repeatedly shot and his body dumped beside a main road on the outskirts of Mehtar Lam, eastern Afghanistan.

At prayer time the evening before, one resident saw a group of men in uniform hiding among trees nearby. Others heard gunfire later that night. But only when they discovered the corpse in the morning, so badly disfigured the face was flattened to a pulp, did they understand a boy had been murdered.

More from GlobalPost: Just outside Kabul, Taliban is in control and preparing for wider war

NATO states now meeting in Chicago are reaffirming the departure of foreign combat troops from Afghanistan by the end of 2014, while simultaneously pledging their commitment to the country's future stability.

In the months prior to the summit, however, Mehtar Lam, the capital of Laghman province, has been shaken by a number of assassinations that appear to be tied to the looming withdrawal.

Many residents here have little faith in their own security forces, and some worry they are experiencing a repeat of the kind of lawlessness that was unleashed when the Soviets pulled out decades ago.

The murder in February of the teenager, named Malyar, left villagers angry and confused. Earlier, the Taliban had delivered letters to local mosques warning worshippers not to join pro-government militias that are being established nationwide with American support. They needn't have bothered because there was already strong opposition to the idea.

"We think it will bring back the bad situation we had in the past and bring anarchy," said Mullah Jan.

Laghman lies on a highway connecting two major cities — Kabul and Jalalabad — and is relatively close to the Pakistan border. Insurgents have long been active in some rural areas here, but they could now be gaining new ground.

More from GlobalPost: Attacks in Kabul: Shape of things to come?

Other recent assassinations in the provincial capital include the killing of a civilian near the governor's office when four men on a pair of motorbikes surrounded his car front and back. The son of a prominent tribal elder was also gunned down in a suburb while retuning home from a game of volleyball.

The fact they have occurred since security in Mehtar Lam was handed over to Afghan forces last summer has reminded people of the civil war that eventually emerged after the Russians left in 1989.

The US has agreed to a long-term strategic partnership with Afghanistan in an attempt to show that history will not repeat itself, but critics say the deal offers little concrete help and the reality is that the endgame is well underway.

Zefnoon Safi, an MP for Laghman said, “A government exists, laws and a constitution exist, but still people are hopeless, they are losing their lives and they do not feel safe.”

Three years ago her brother, Hamidullah — a member of the intelligence service — was shot dead. It is only lately, though, that she has decided the danger is so great that there is no point visiting her province “unless the issue is essential.”

Speaking in Kabul, Safi claimed to have seen security officials and relatives of local politicians at the funeral of an insurgent in Mehtar Lam.

“Now there is the kind of situation where you cannot know who is your friend and who is your enemy,” she said.

More from GlobalPost: Is Afghanistan on the brink of civil war?

Most of the recent assassinations have occurred at sunset or after dark, with the perpetrators striking quickly and then escaping. Whether they are common criminals, rebels, families out to avenge personal vendettas or even government-sponsored hit squads, no one quite knows and it may not matter. The effect, it seems, is the same regardless of who is responsible.

"The insurgents are not fighting out front,” he explained. “They are planting mines and carrying out these attacks during the night.”

Mahsal was interviewed just a short distance from an American military base, where the US flag is clearly visible to passersby. Two Afghans employed in menial jobs there were shot after work a couple of days ago, he said. One died and the second was injured.

Despite this, Mahsal insisted the government would be able to keep security when NATO leaves if its armed forces are adequately equipped beforehand.

Publicly at least, the governor of Laghman, Mohammad Iqbal Azizi, has also tried to remain upbeat. At his heavily guarded compound in March, he talked in glowing terms about dreams being realized and the “smooth and successful transition” process.

“People outside Afghanistan, specifically in the western part of the world, are expecting Afghanistan to be transformed in 10 years like Switzerland,” he said in English.

Then, when the interview was over, he advised us in Pashto that for security reasons, a foreign journalist should not visit any villages and should leave the entire province sooner rather than later.