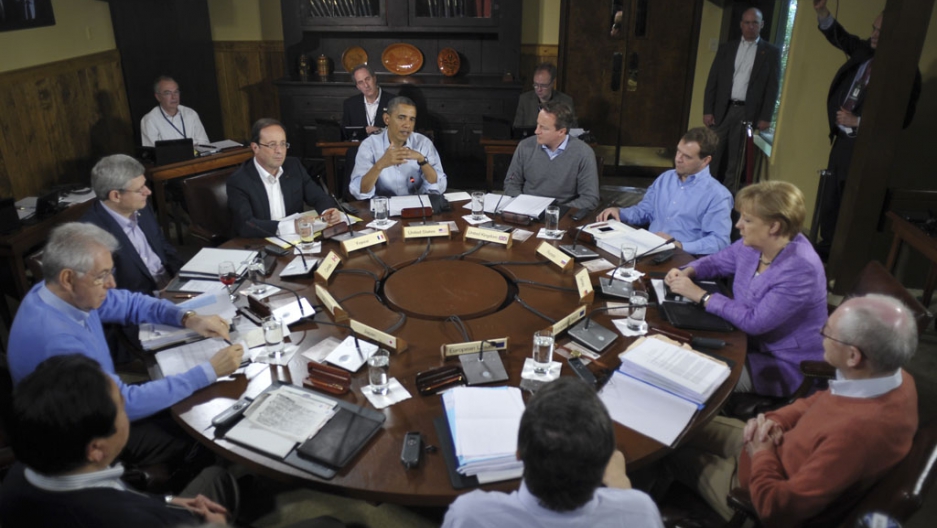 US President Barack Obama chairs a G8 summit session on May 19, 2012, at the Camp David presidential retreat in Maryland.
Credit: MANDEL NGAN
Share

Keeping Greece in the euro zone and Iran’s pursuit of nuclear energy dominated early talks today at the G8 summit at Camp David.

President Barack Obama welcomed seven other leaders from some of the world’s largest economies on Friday to his presidential retreat in Maryland.

They spent time talking about how to grow the economy while controlling debt in countries such as Greece, Ireland, Portugal and Spain, Reuters reported.

“Contingency plans need to be put in place and the strengthening of banks, governance, firewalls – all of those things need to take place very fast,” UK Prime Minister David Cameron said, according to Reuters.

Greek politicians last week failed to form a coalition government, meaning voters will return to the polls next month.

More from GlobalPost: Would you trust a Greek bank with your savings?

Many worry the country will leave the euro zone, and others ask if the country can ever save its banking system, both of which would further cripple the world economy.

Greeks have withdrawn millions from their banks in fear the economy could collapse.

The leader of the 27-nation European Union said there are ways home.

“We will do whatever needed to guarantee the financial stability of the euro zone,” European Council President Herman Van Rompuy said, according to Bloomberg.

The new French president met with Obama on Friday.

Hollande was elected on a left-leaning platform that promised taxes on the rich and government spending.

His policies are at odds with German Chancellor Angela Merkel, who is facing increased pressure from her counterparts to balance austerity with stimulus.

“All of us are absolutely committed to making sure that growth and stability and fiscal consolidation are part of an overall package,” Obama said, according to The Associated Press.

The Group of Eight is the US, UK, Russia, France, Germany, Canada, Italy and Japan.

Obama will travel to Chicago on Sunday for the two-day NATO summit.