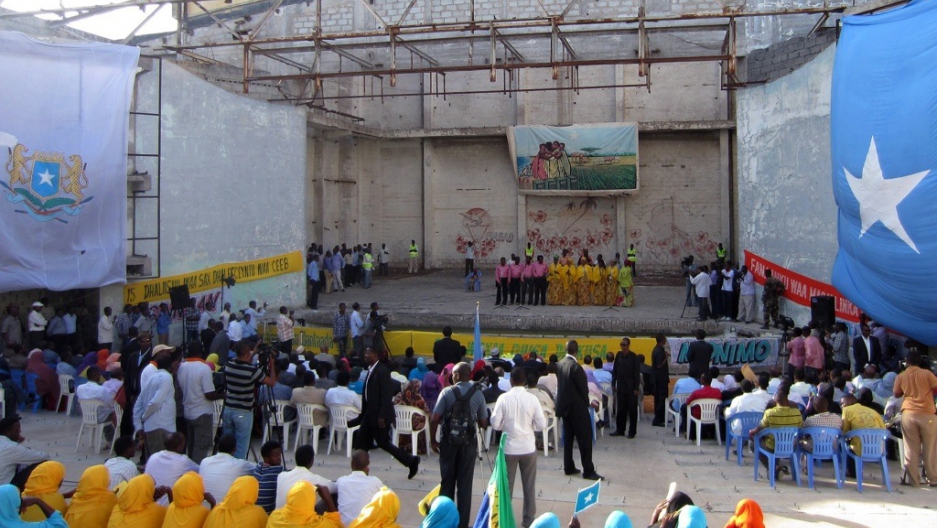 Spectators gather to watch a performance staged by artists at the open-air, Chinese-built Somalia National Theatre which was reopened for the first time in 20 years, on March 19, 2012, in Mogadishu. The fragile Western-backed government, which is waging an uphill battle against Islamist Al Shabaab militants in the Horn of Africa nation, claimed it was a sign that things were slowly improving in the pockmarked seaside capital.
Credit: Stringer/
Share

NAIROBI, Kenya — On Thursday there was a TED talk in Mogadishu.

Under the logo "Ideas worth spreading" TED (Technology, Entertainment, Design) talks have since 1984 developed into a global cottage industry with bright young things the world over getting together to share their bright ideas. TED talks — or their freelance franchise, TEDx — have appeared almost everywhere, but never before in Mogadishu.

The organisers — a small group of white foreigners and Somalis — set the theme as "rebirth" hitching their optimistic wagon to a couple of recent news stories (from Newsweek and the New York Times) which reflect some undeniable positive changes in the city over the last nine months.

GlobalPost has also reported extensively on the city's growing security and return to life.

"There is hope in Somalia," said the conference blurb.

"An influx of African Union troops has pushed insurgents out of Mogadishu and representatives from the country’s clans are meeting to discuss the formation of a new government and draft constitution. With sustained peace on the horizon, the Somali diaspora is returning home and starting businesses. International investors are exploring
opportunities and the first Somali bank has now opened.

"While the stability remains fragile, Somalis are optimistic that a turning point has been reached after 21 years of conflict, and we are witnessing the rebirth of Mogadishu.

"TEDxMogadishu celebrates the power of ideas to positively change the world; we aim to build community by bringing together like-minded people who believe in this mission."

Let's not get carried away.

The white organizers of TEDx admitted to getting "island fever" from being locked up in their hotels because of the danger of going out on the streets. Most foreigners in Mogadishu still travel with armed escorts and wear body armor. Mortar attacks are still regular, if less commonplace, occurences and suicide bombers strike with depressing regularity. One recently struck the National Theatre — a symbolic target — on the day the NYT published its optimistic take on the city.

Mogadishu is very far from normal, and while it is certainly safer for Somalis, it remains a sketchy place for foreigners and will, in all likelihood, be that way for some time to come.

And it's also fair to question how widespread the much-touted investor opportunities really are when the same person — Somali businessman Liban Egal — crops up in every positive news report and is also involved in organizing the conference.

As for the "ideas worth spreading"? There were talks by Somalis on camel milk, fishing, banking and peace and there was some music. Hardly topics that sit comfortably under the cutting-edge "Technology, Entertainment, Design" banner.

Nevertheless, putting together a live stream of the event from Mogadishu and receiving hundreds of viewers throughout the three hour event was impressive. And the talk's very existence is something that would have been impossible — unthinkable — just a year ago.

The value of TEDx Mogadishu may not lie in the content but the very concept, marking a symbolic step toward bringing Mogadishu back from its seemingly endless war.