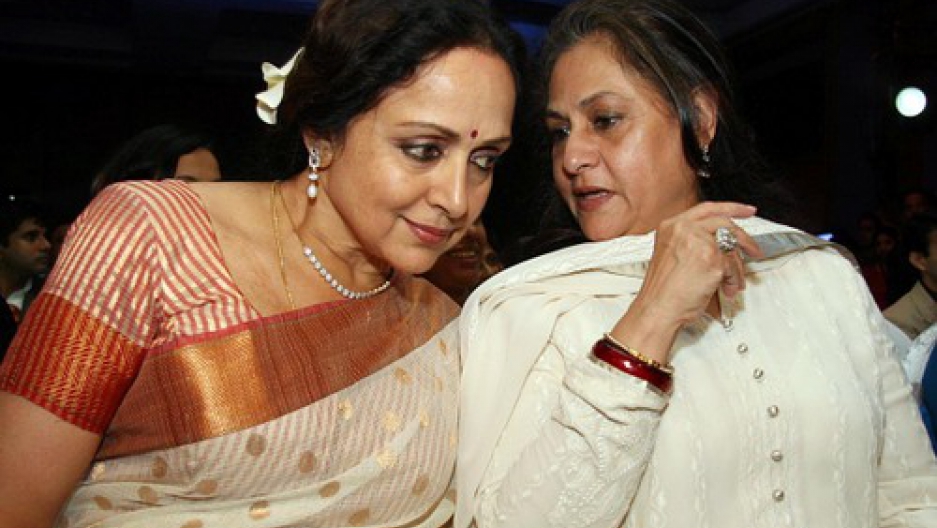 Shown here with fellow Rajya Sabha member (and one-time Bollywood star) Hema Malini, actress Jaya Bachchan was reportedly steamed that state-run television channel Doordarshan televised her reaction when Rekha (another well-preserved actress) was also inducted into India's version of the House of Lords. Later, the honorable members denied Bachchan ever lodged a complaint. But it did prompt a couple questions... Such as: Are Indians oversensitive? And what are so many ex pinups doing as legislators?
Credit: STR
Share

India has the world's worst famous people. They want all the adulation (and perks like unmerited posts in the government), but none of the "baseless" rumors, malicious gossip and catty remarks.

But this has been a particularly good spring for schadenfreude.

First, there was a long-running bit of journalistic comedy (yes!) after the Indian Express devoted the entire front page to a non-existent coup.  (I know, I know: "We never used the C word!"... tell it to your lawyer).

Then everybody piled on to attack a rather clever, 60-year-old political cartoon in a stunning show of solidarity with India's otherwise-mostly-still-despised erstwhile untouchables, the Dalits. (It shows B.R. Ambedkar, the Dalit politician who wrote India's constitution, riding on a snail labeled "Constitution" while then-Prime Minister Jawaharlal Nehru urges the beast onward with a whip.  The trouble is now it's in the school textbooks, and people have decided it looks like Nehru is whipping Ambedkar, even though the Dalit leader is also holding a whip).

And, finally, today Bollywood queen bee and member of parliament Jaya Bachchan (wife of Amitabh Bachchan, mother of Abhishek Bachchan, mother-in-law of Aishwarya Rai, and an actress in her own right) reportedly blew a gasket because the state-run television channel, Doordarshan, kept showing her face during the induction of fellow former Bollywood starlet Rekha into the Rajya Sabha as well.  (The honorable members of India's version of the House of Lords later denied that Jaya made a fuss).

I'm treading into territory most often utilized by columnists who write under pseudonyms and titles like "Under Honey's Hat" and "Neeta's Natter," but here goes: The subtext here was that Rekha was always rumored to have a thing going with Jaya's husband back when they were all stars. In all likelihood there was nothing to it, since Bollywood's idea of PR is to leak rumors of such "link-ups" between the stars of upcoming releases.  So Doordarshan was probably "taking pangas" (or "picking quarrels," as they it say hereabouts) in a way not behooving a state-run TV channel.

But the complaint, if it really existed, clearly only made matters worse, right? Surely as a Bollywood star, this is a situation you've encountered before (from the aforementioned Honeys and Neetas).

Tell it to Shekhar Gupta, the once respected editor-in-chief of the Indian Express, who also seems determined to trash his own reputation. The coup story -- which had his byline on it, as well as the names of two other reporters -- went over like a lead balloon.  For awhile some folks tried valiantly to defend the point, which was well-nigh indecipherable because of Gupta's efforts to be clever or coy or, as the paper put it later, "measured" (Ha!). But in the end it all turned into a big joke, which long-time Outlook magazine editor Vinod Mehta described as "the mother of all mistakes" in an interview with Open, another Indian publication.

So far so good. But despite a 30-plus year career in the media business (and coming on the back of a borderline article of Gupta's own), has threatened to sue Open Magazine and Vinod Mehta for "a total of Rs 500 crore (Rs 100 crore each for IE, the Editor-in-Chief, and the four journos)" unless there are abject apologies all 'round, reports FirstPost.com.  (That's about $90 million in today's rapidly devaluing rupees, for those of you keeping score).

To me, this all begs a number of questions, such as:

Was Nehru really that skinny?

Why are there so many former pinups in the Indian parliament?

Why are Bollywood rumors always "baseless"? And why, while we're on the subject, do all starlets say they are "voracious readers" who "love to gorge on burgers and pizzas"?

And, of course, should newspaper editors really be fighting against free speech?

If I receive any legal notices due to this blog post, I hope my loyal readers will have my back and make sure to point out the irony.