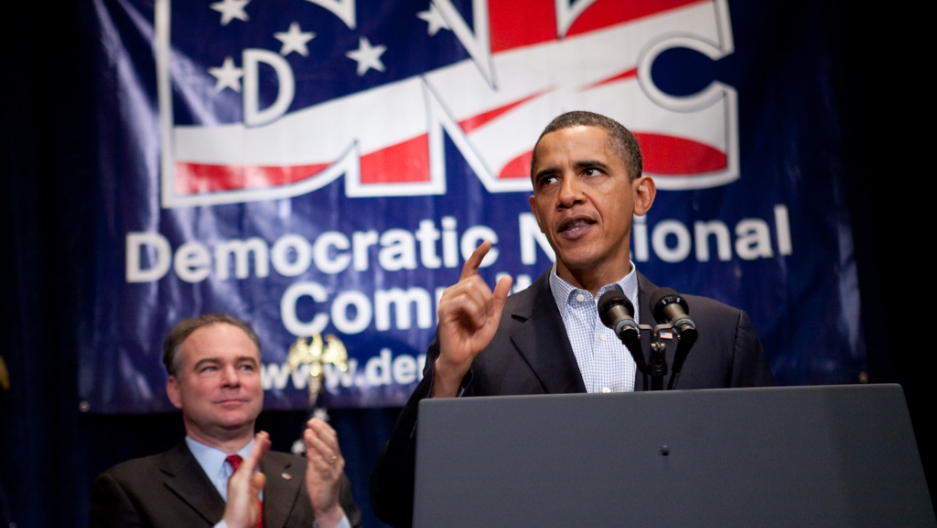 President Barack Obama receives applause from Democratic National Committee chairman Tim Kaine (L) as he delivers remarks at the DNC winter meeting on February 6, 2010 in Washington, DC. Top party officials and supporters gathered for the annual meeting to map out their agenda for the year.
Credit: Brendan Hoffman
Share

LOS ANGELES — What would you rather watch: MTV's Video Music Awards, or Obama's acceptance of the Democratic presidential nomination?

The VMAs and the President's official speech at the DNC were both scheduled to air on September 6th, CNN reported, but thankfully, you won't have to choose.

An MTV spokeswoman told CNN that the popular music station would be kind enough to move the awards to an 8 p.m. to 10 p.m. Eastern Time slot, rather than the usual 9 p.m. to 11 p.m. "to avoid conflict with the Democratic National Convention proceedings that evening."

The Obama campaign had no comment on the airtime conflict, according to CNN.

The show will air live from Los Angeles' Staples Center at 8 p.m. ET, MTV announced on their website. However, they did not say that the change of time or venue was a result of the DNC timing, the International Business Times reported.

The VMAs, which honor the best in pop, hip hop, and top 40s music of the year, have been held at New York's Radio City Music Hall, the Palms Hotel and Casino in Las Vegas, and American Airlines Arena in Miami, according to MTV. Last year's show drew 12.4 million viewers.

Obama accepted the 2008 Democratic nomination at Denver's Mile High Stadium, and this year's venue in Charlotte, North Carolina can hold up to 80,000 people, CNN reported.

More from GlobalPost: DNC should move out of North Carolina in wake of Amendment One, say Democrats