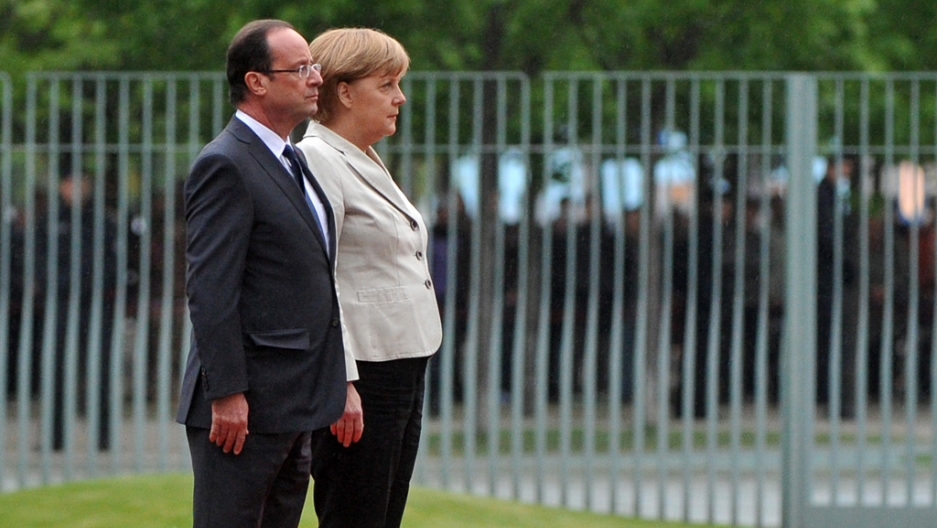 German chancellor Angela Merkel (R) and the new French president Francois Hollande listen to their national anthems at the German Chancellery on May 15, 2012 in Berlin. Francois Hollande meets Angela Merkel for their first talks on the debt crisis as Greece's future in the eurozone appears uncertain before giving a news conference and sharing a working dinner.
Credit: BERTRAND LANGLOIS
Share

BERLIN, Germany – It started with a handshake, not a kiss. When Chancellor Angela Merkel and new French President Francois Hollande finally met in person on Tuesday evening, there was little of the warmth that marked her meetings with Nicolas Sarkozy in recent years.

Aides had downplayed the rendezvous as simply aimed at getting to know one another rather than about hammering out any policy. Yet the future of Europe could hinge on whether these two leaders find a way to work well together.

Rarely have two people met for the first time with so much baggage. Merkel refused to meet with Hollande during his election campaign, and made the highly unusual step of publicly backing his rival, fellow conservative Sarkozy. Hollande for his part seemed to be campaigning as much against Merkel as the incumbent, pledging to renegotiate the fiscal pact that she had championed.

Now the two have finally met face-to-face and the encounter seemed cordial if hardly warm. Following the ceremonial reviewing of the guard of honor – during which Merkel had to gently nudge Hollande in the right direction on the red carpet – the two held an hour -long meeting. They then addressed the throng of international journalists in a joint press conference during which Merkel remained stony-faced during much of Hollande’s comments, interspersed with the odd smile.

The pair did seek to downplay their differences and strike a friendly tone with Merkel even joking that the lightning that had struck Hollande’s plane on his way to Berlin was perhaps a “good omen.”

“I’m not sure whether there is sometimes more divergence perceived in the public realm than there really is,” the chancellor told the press conference. “We are aware of our responsibility, as Germany and France, for a positive development in Europe. Carried by this spirit I believe we will of course find solutions for the different problems.”

Both tried to show a united front on Greece, which risks ejection from the euro zone if it backs anti-austerity parties in the fresh elections likely after the parties failed to form a government. “Just like Frau Merkel,” Hollande said, he wanted Greece to remain in the euro zone while insisting that Athens meet the terms of the bailout agreement.

Yet when it came to the crux of the differences between the two, on austerity versus growth, it was obvious that the only thing that had been agreed so far was that they disagree.

After all, it remains to be seen how Merkel’s strict stance on rapidly reducing budget deficits can be married with Hollande’s plea for some kind of stimulus package to boost growth.

Hollande reiterated his promise to reopen talks about the fiscal pact, the agreement on strict budget discipline which he has said France will not ratify unless a growth element is also adopted.

“I said in the campaign, and I repeat today, that I want to renegotiate what was established at a certain moment,” Hollande told reporters. “Everything that can contribute to growth must be put on the table. I don’t want growth to be just a word, but tangible measures.”

He mentioned boosting competitiveness, as well as Euro bonds – essentially pooling the debt of euro zone members – something Merkel has so far flatly rejected.

He did not, however, mention tinkering with the European Central Bank’s mandate, surely a red line if ever there was one in Berlin.

For all the inauspicious beginnings, observers predict that the two will eventually hit it off. Both play on their modest, down- to-earth style and exude an air of pragmatism rather than charisma. Hollande depicts himself as “Mr Normal” in contrast to the Bling Bling of his predecessor Sarkozy, while the unassuming Merkel is often seen doing her own grocery shopping. And both are said to have a wry sense of humor in private.

Furthermore, Hollande’s gesture of appointing Germanophile Jean-Marc Ayrault as his prime minister will have gone down well in Berlin.

Yet, it is hardly a meeting of equals. Merkel is an old hand in European politics now, in her seventh year in office, while Hollande’s previous executive experience has been confined to serving as mayor of the small town of Tulle.

Furthermore Germany is the EU’s economic powerhouse, with its export-driven economy keeping the rest of the euro zone out of recession, according to figures released on Tuesday. And Berlin has long been calling the political shots in Europe, with the fiscal compact being dreamed up by Merkel, as a way of preventing EU states from getting into deeper debt in the future.

More on GlobalPost: Francois Hollande sworn in as French president

At the same time Merkel is increasingly isolated in Europe, as there is a growing realization that austerity is choking off growth. Hollande knows that other leaders, including conservatives like Italy’s Mario Monti, also want Berlin to budge on its debt reduction fixation.

Hollande came to Berlin straight from his inauguration ceremony in Paris. After beating Sarkozy on May 6 he will feel he has a mandate from the French people to push for a change of direction in Europe. Yet he also faces a tough economic situation back home, with just 0.1 percent growth in the first quarter and growing unemployment, now at a 13-year high of 10 percent. If the economy were to contract even further, it could make it very difficult to fulfill many of his campaign pledges, such as reversing Sarkozy’s pension reforms.

Merkel has her own problems, despite the strong economy. Her party, the conservative CDU, has just suffered a bruising defeat in the state of North Rhine-Westphalia. Her coalition is increasingly fractious, with Bavaria’s CSU leader Horst Seehofer publicly slamming the CDU candidate in North Rhine-Westphalia Norbert Roettgen on TV for his campaign, while the FDP is unpredictable due to an ongoing leadership crisis.

The fact that she needs a two-thirds majority in the Bundestag to ratify the fiscal compact means she is dependent on the opposition SPD. And while the party has broadly backed her euro policy, it has been emboldened by Hollande’s victory and the strong showing in NRW. On Tuesday the party’s leaders said that they would delay the vote on the fiscal pact, originally scheduled for late May, saying it wanted to see concrete growth measures as well as austerity.

That would leave time for Merkel and Hollande to agree to some sort of compromise solution.

The pair said they will seek an agreement ahead of the next big summit of EU leaders in June. “It will be very important that Germany and France present their ideas together at this summit, and we have talked about the preparation,” Merkel said.

They will see each other before that, meeting at an informal dinner of EU leaders on May 23, as well as at the forthcoming NATO and G8 summits.

However, Hollande is unlikely to show much willingness for compromise with Berlin just yet. After all his party is facing legislative elections in mid June and he will want to make sure he is not seen to be backsliding on campaign pledges.

Hollande wants his five-year term to start with his Socialist Party securing control of the National Assembly so that he can push through his agenda. Otherwise he faces a frustrating period of “cohabitation” with a prime minister from the opposing camp, such as occurred when conservative Jacques Chirac’s presidency coincided with the premiership of Socialist Lionel Jospin from 1997 to 2002.

As such Merkel cannot expect Hollande to veer from his insistence on growth measures. And for all his unassuming manner, he could well prove to be a more difficult partner than Sarkozy in the long run.

Nevertheless Merkel is also likely to stand firm on many issues. Asked on Tuesday night if she feared Hollande’s campaign promises she replied coolly: “I am seldom afraid, as fear is not a good counselor in politics.”