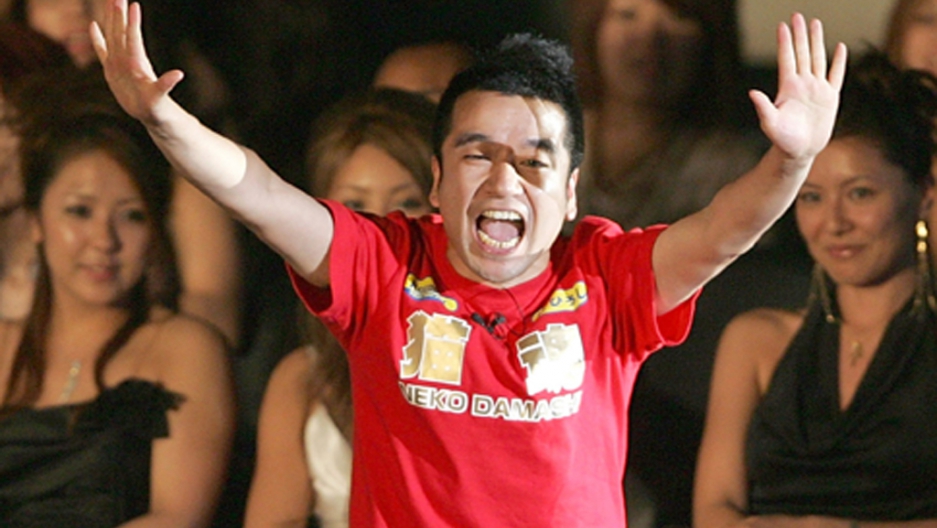 PHNOM PENH, Cambodia — For a minute there, it seemed as if a Japanese comedian known for making cat gestures was going to swipe Cambodia's spot in the Olympics marathon event.

Yes, you heard that right.

Neko, or "Cat," Hiroshi had never run on the Japanese national track-and-field team because his running skills were “far from the standard,” according to the Japanese Athletic Federation.

But there's more to getting on an Olympic running team than speed. Or so Hiroshi hoped.

In Cambodia, the academic standards are lower. No athlete in the Southeast Asian country has ever qualified for an Olympic event; those who have participated have done so as a result of a wild-card system used to give developing nations a leg up.

The Cambodian runner who holds the country's marathon record is Hem Bunting (a record that is seven minutes faster than Neko's, mind you).

At 26, Hem Bunting is lean and fast. He just completed the Paris Marathon in April in 2:23, which is five minutes shy of the Olympic qualifying time, but would have still earned him a wild-card spot.

But Hem Bunting started to fall out of favor with athletic officials in Cambodia when he began requesting better conditions for the low-funded national team. After leaving the national team in March of last year after his requests went ignored, he went on to train independently and prepare for the Paris marathon at a facility in Kenya’s Rift Valley.

With Hem Bunting out of the way, it was Neko's show. He moved in fast and sly, like a cat.

In addition to contributing large amounts of cash, Neko was able to acquire nationality with the assistance of Cambodian athletic bodies in October 2011, so that he could represent Cambodia in the South East Asian Games competition the following month.

Alas, it was not meant to be. Neko's newfound home would not make all his dreams come true.

This month, the International Association of Athletics Federations, the world's governing body for track and field, ruled that Neko would not be allowed to compete on the Cambodian team since the rules state that athletes with newly acquired citizenship must have been a citizen of the new country for at least a year. Since Neko received citizenship in October 2011, he falls short of the year required before the Olympic marathon in August.

More from GlobalPost: Cashing in on the Khmer Rouge

But before his plan was crushed, Neko spent a little time working on his stride.

He visits his adopted country every month or two for about a week, but can only be reached through his representative in Cambodia. When he is in the country, cameramen follow him as he runs 10 minutes with Cambodian national runners.

More frequently, Neko can be found at home in Japan, where he permanently resides, and where he makes claw gestures and screams a cat-like “nyah!” while surrounded by dancing and singing Japanese girls as can be seen on YouTube.

A recent post on Neko’s blog reflects his increasing presence in Cambodia, as it announces that "Hiroshi Cat" is now renamed "Hiroshi Chmar" (cat in Khmer).

Bunting, though already off the team, was vocally displeased.

“I feel I have been cheated, disrespected. I run for my country, and my country chooses this clown from Japan who I beat in a half marathon both last year and this year. The decision is not fair at all, and Cambodians nor Japanese are happy with it. He is not faster than me,” Bunting said in a phone interview while he was training in Kenya. Neko did not have the full blessing of his countrymen. Many Japanese athletic observers condemned his efforts, and Cambodia's welcoming of them, as shameful and unfortunate.

“I’m extremely disappointed, thinking about the feelings of young runners [in Cambodia] who gave up the Olympic seat to a Japanese candidate,” Japanese Olympic marathon medalist Yuko Arimori said of the scandal.

“Cambodian runners have improved their ability despite a poor training environment. I want local athletes to participate [in the Olympics].”

Bunting is the epitome of one such runner who has achieved impressive performances despite near-squalor training conditions.

Born one of nine children to an impoverished family in a rural Cambodian province, Bunting ran several miles a day to school. He played football as a teenager, but quickly realized his talent for running, easily beating his peers in local 5 km, 10 km and 21 km races, prompting his teachers to arrange for him to train with the national team in Phnom Penh in 2004.

Getting by on a meager salary, Bunting made the national training center his home, sleeping on a mat at night in a room with about 300 other athletes and consuming barely enough calories to satiate his tiny 56-kg, 1.67-meter-tall frame, he said.

Despite the poor training conditions, Bunting clocked remarkable times — a 1:11 half marathon in 2008 and a 2:25 marathon the following year.

“We made fun and called him aboriginous because he used to run without shoes in the mountains,” said Pheng Polin, a cycling coach who trained with Bunting. “He was very focused, disciplined, and just wanted to improve himself.”

But things turned sour for Bunting when he began complaining about training conditions.

“He wanted attention to the athletes. He requested things such as quality food, clothes, shoes made for distance runners not sprinters, monthly training programs and insurance for accidents on Cambodia’s dangerous roads,” Polin said.

Four runners on the team said Bunting was not in the wrong for speaking up. “The requirements were nothing the government couldn’t offer,” one runner said, calling Neko’s selection “awful and unjust.”

Cambodian athletic officials deemed Bunting as having an “attitude problem” for speaking up and following his own plan. Feeling ignored, Bunting quit the team.

“We don’t train right on the national team. Bunting had scientific knowledge on what the right program should be for him to improve, and the federation saw this as a threat,” said Rasmey Prum, a former national team runner.

“Maybe it is traditional Cambodian culture. Pol Pot killed educated people because they were a threat. It’s the same system. Smart people are harder to control,” he added.

After he quit the team, Bunting struggled to find private sponsors and continued training diligently. But it looks as though Neko's not the only one whose Olympic dreams are shattered. Bunting can't run in any international events under the Cambodian flag unless he is on the team.

“I cannot receive even the best athlete who does not respect the rules. Yes, Cambodia does not have up to par training conditions, but all the athletes train in the same conditions and not all quit,” said Vath Chamroeun, secretary-general of Cambodia’s National Olympic Committee. “If we gave to Bunting we’d have to give to everybody.”

Since Neko has been found to be ineligible, Chamroeun said he would nominate an 800-meter runner, and said Bunting would have to wait until next time.

“Bunting is faster than everyone. How is it possible that the less qualified athlete is representing Cambodia,” said Rasmey Sokmongkol, a former sponsor to Bunting.

“I feel sorry for this. He deserves the chance to play because he commits himself to bring honor to his country,” said national runner Cheng Dara. “No one here can run faster than Bunting.”

“My teammates and I think Bunting deserves the chance, but I would still be happy if Kieng Samorn goes to the Olympics,” Dara said. “He is my friend, and he is Cambodian.”

Bunting said he was disappointed with Cambodian athletic officials because he feels he was not a factor of consideration for the games. But he said he hopes to race for Cambodia going forward.

“When I returned from Paris last month, I submitted my documents to the federation to rejoin the team. I want to race at SEA Games in the future,” Bunting said last week.

Neko’s spokesman in Cambodia said Neko has the same aspirations, and that the Olympic ineligibility is not a big problem because Neko can run for Cambodia in the future.

“It's OK that Neko can't go this time. He is still Cambodian. We can't change the rule, but he is eligible to compete for Cambodia from October, so he can race at SEA Games or the Asian Games," said Keo Visal, the spokesman.

And so, the battle is far from over. But many Cambodians hope the country will do the right thing to help develop its own.

“The government should encourage our own sportsman or we will lose them,” said Khu Sros, a national runner.

“It is very rare that Cambodia produces a runner that can compete on an international level,” said Polin, who trained with Bunting. “When it has one, this should be recognized and encouraged.”