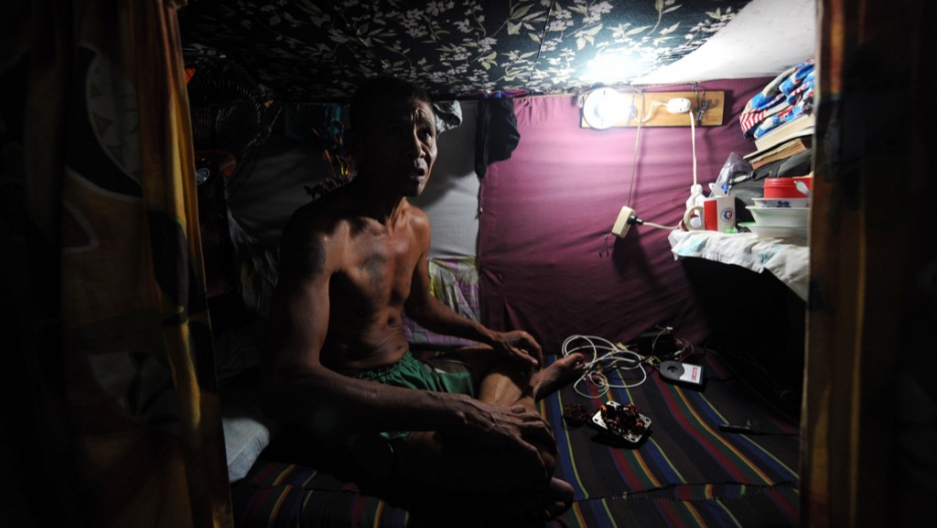 A disabled inmate sits in a jail cell in San Pedro Sula, a city where an estimated 20 people die every day, making it known as the world's crime capital.
Credit: ORLANDO SIERRA
Share

COMAYAGUA, Honduras — Emma Rama walked down the dirt road to the gate of the torched Comayagua state prison carrying a plastic bag full of clothes and food that she hoped to give to her son. Three days earlier a raging fire burned 360 inmates alive inside their cells.

Rama hadn’t received word from 19-year-old Santiago since the prison blaze, one of the worst in Latin American history.

She passed the sack to a female prison guard, but the guard returned with the supplies in hand and a blank look on her face.

“I’m really sorry, but your son isn’t here,” she said.

Rama collapsed. Grabbing her heart and gasping for air she screamed out in agony. Tears streamed down her face and she yelled that she would rather be dead.

The devastating prison fire in Honduras in February was the latest crisis for Central Americas’ crumbling justice systems and provoked heartbreak across a region where citizens have lost faith in law enforcement.

Response to the catastrophe, which authorities said started when a lit cigarette ignited a mattress in cellblock six late on Feb. 14, was riddled with negligence and human error and has prompted loud cries for urgent reforms.

Gatekeepers couldn’t find the keys to let prisoners out of their cells and firefighters were kept outside the complex for 30 minutes while guards awaited authorization to let rescuers in to put out flames.

“Our prison system is in pieces,” said Lucy Pavon, a psychologist for the Honduran Prevention, Treatment and Rehabilitation Center for Torture Victims and Their Families, who has visited prisons here for years. “There is no other way to say it. It’s absolutely shattered.”

A recently released report by the Inter-American Human Rights commission slammed Central America’s jails as “out of control” where prisoners suffer from “systematic human rights violations.”

Honduras’ 24 prisons are designed to hold roughly 8,000, but are crammed past capacity with almost 13,000 people. Some lack potable water. More than half of the prisoners have never been sentenced by a court and many have already served their sentences. Some inmates say they have been awaiting trial for up to three years for alleged crimes ranging from petty theft and drug possession to murder.

The Comayagua penitentiary has a food budget of less than one dollar a head per day, local human rights groups said. Detainees spill out of shoddy beds stacked four high.

Honduran President Porfirio Lobo of the conservative National Party has declared his nation’s jails in a state of emergency and demanded a review of prisoner status, but reforms have been sluggish and previous calls for change have gone unheard.

“We’ve been talking about the same problem for a decade and nothing ever improves,” said Claudio Saenz, coordinator of an international religious fellowship that works with prisoners in Central America.

A prison riot on March 29 in San Pedro Sula, Honduras’s second largest city, claimed the lives of 13 inmates when members of the ‘paisas’ gang attacked rivals with guns and knives, briefly taking control of the jail.

Nearly 70 people died in Honduras during a prison fire in 2003. Another inferno in 2004 that killed 107 prisoners landed Honduran authorities in the Inter-American Human Rights Court this year to face lawsuits asserting that they knowingly approved a structurally flawed jail.

In 2010, a blaze at an overcrowded juvenile lockup claimed 27 lives in El Salvador where more than 24,000 prisoners squeeze into 19 correctional facilities built for 8,080, according to a US State Department Human Rights report.

Plagued by staggering inequality and overwhelming poverty, Central America has succumbed to out-of-control violence to become one of the world’s most murderous regions.

Otto Perez, the recently elected right-wing president in Guatemala, where 39 of every 100,000 people are slain, vows a “mano dura,” or hard fist, against criminals and has unveiled plans to build seven new jails in the next four years to boost the country’s capacity from 7,000 to 10,000 inmates.

“We will still have overcrowding, but these new prisons will help us fight the crime that we all experience today,” Perez said.

Half of Guatemala’s 13,200 prisoners are in pretrial detention and 1,500 have already completed their prison terms, according a recent government analysis. The nation’s jail system has one prison guard for every 12 prisoners, a quarter of the one agent per three inmates that the United Nations recommends.

“These places are run by the prisoners and guards have almost zero presence,” said Anthony Fontes, a University of California researcher studying crime in Guatemala.

Prisoners smuggle in drugs, weapons and cell phones which they use to direct elaborate extortion schemes from inside their cells. In one Guatemalan jail, an inmate runs an illegal DVD pirating business where even guards buy movies, Fontes said.

The horrific fire at Comayagua has generated diverse reactions from Central Americans.

“An eye for an eye and a tooth for a tooth,” said Juan Melgar, a 52-year-old barber in Guatemala City. “They took lives so they had their lives taken. That seems fair to me.”

Others sympathized with victims and their loved ones.

“They are human beings just like everyone else and neither they nor their families deserve to suffer like they suffered,” said Ana Lourdes, a 25-year-old teacher. “Some might have made mistakes, but no one deserves to die so heinously.”

Honduras does not have space to move Comayagua’s survivors to a different facility and aid workers said that many of the 492 that remain in the prison are traumatized.

Carlos Rapalo, a 50-year-old convict serving a 25-year sentence for murder at Comayagua, still remembers the harrowing screams followed by an ominous silence.

“We don’t talk about that night. We keep quiet,” Rapalo said. “The prison is emptier now, but it feels much heavier.”