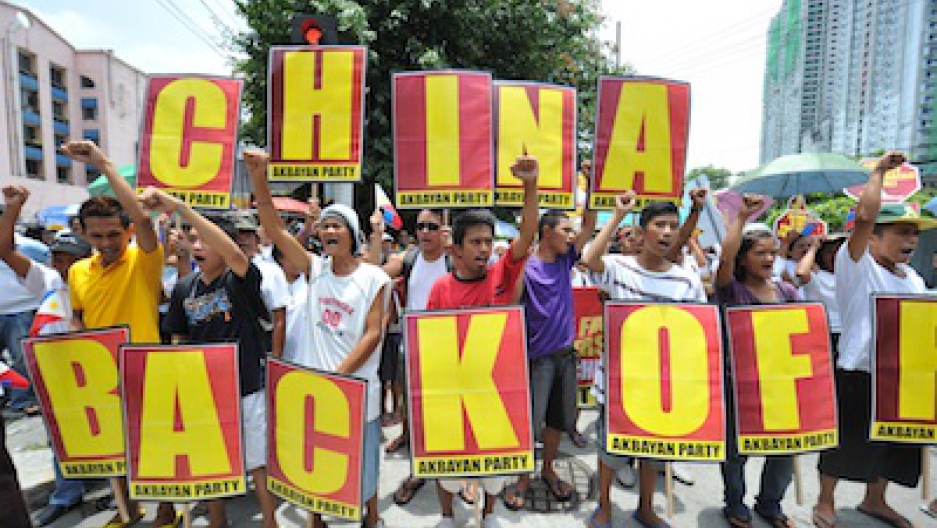 Filipino protesters holding placards shout anti-China slogans during rally in front of the Chinese consulate in the financial district of Manila on May 11, 2012.
Credit: TED ALJIBE
Share

As Chinese and Philippine vessels refuse to budge from a disputed speck of land in the South China Sea, jingosim in both countries is growing more absurd by the day.

(If you're unfamiliar with this conflict and its powerful implications for the U.S., check out my colleague Ben Carlson's explainer.)

Here we have a Chinese television "journalist" standing atop a remote outcropping of the island, where he has planted a Chinese flag. Protesters in Hong Kong are burning the flags of the Philippines and its major ally, the US. The state-run China Daily writes that the country is being "pressed into a corner where there is no other option left but the use of arms."

The Chinese government has also warned its citizens that they may be harmed if they step outside in the Philippines, according to Channel News Asia.

Meanwhile, at protests in the Philippines, the flag of the People's Republic of China is being set alight on the streets, according to the Philippine Star. A demonstation leader in Manila tells the BBC that China is acting like an "arrogant overlord."

And to top it all off, Filipino women have gathered before the Chinese embassy in Manila to defiantly mime along to the disco hit "Kung Fu Fighting."