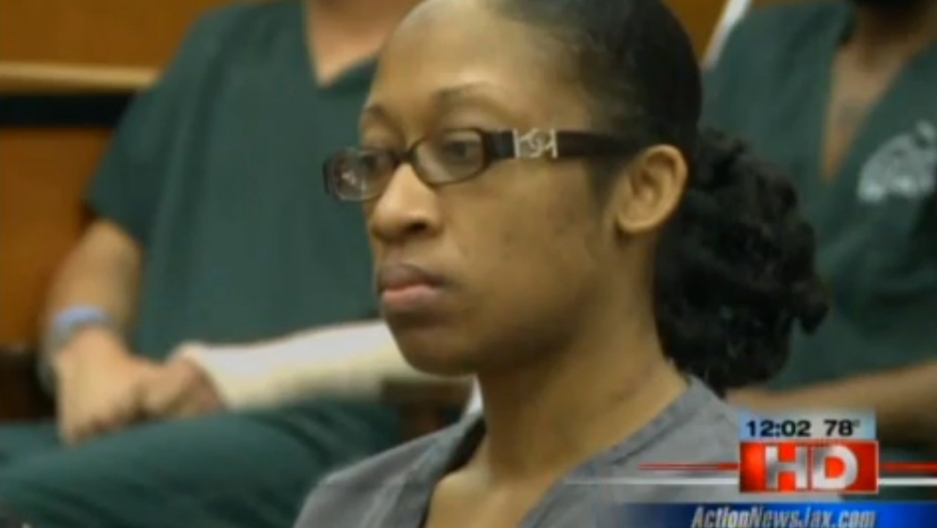 Marissa Alexander at her sentencing on May 11, 2012.
Credit: Action News Jacksonville
Share

Marissa Alexander, a Jacksonville, Fla., resident who fired a ‘warning shot’ into a wall during a fight with her abusive husband, was sentenced to 20 years in prison today, the Florida Times-Union reported.

Judge James Daniel said state law left him no choice after a jury convicted Alexander of aggravated assault in March.

"Under the state's 10-20-life law, a conviction for aggravated assault where a firearm has been discharged carries a minimum and maximum sentence of 20 years without regarding to any extenuating or mitigating circumstances that may be present, such as those in this case," Judge Daniel said while announcing the sentence, according to the Orlando Sentinel.

Alexander’s attorneys had unsuccessfully argued that Florida’s ‘Stand Your Ground’ law, which allows people to defend themselves with potentially deadly force when they feel threatened with serious harm or death, let her off the hook, CNN reported.

Alexander claimed that her husband, Rico Gray, tried to strangle her on Aug. 1, 2010, so she fled their house, CNN reported. However, she said, she forgot her car keys, so she went back inside. Her husband threatened to kill her, so she fired a shot from her handgun into a wall.

Judge Daniel said returning to the house was not the behavior of someone who was in “genuine fear of his or her life,” the Florida Times-Union reported.

The case was prosecuted by Angela Corey, the same state attorney who is handling the Trayvon Martin case, the Orlando Sentinel reported.

Rep. Corrine Brown challenged Corey in the courthouse hallway after the sentencing, a confrontation that was filmed by CNN affiliate WJXT. "There is no justification for 20 years," Brown told Corey, according to CNN. "All the community was asking for was mercy and justice," she said.

Corey noted that Alexander had rejected a plea bargain that would have given her a three-year sentence, CNN reported. She also said that the bullet Alexander fired could have bounced off the wall and hit Gray or his children, who were in the house at the time, according to the Florida Times-Union.

"If we want to protect self-defense in Florida, we can't have a 20-year mandatory minimum hanging over the heads of people who fire warning shots instead of just killing their attacker," Greg Newburn, Florida Project Director for Families Against Mandatory Minimums, told the Orlando Sentinel.