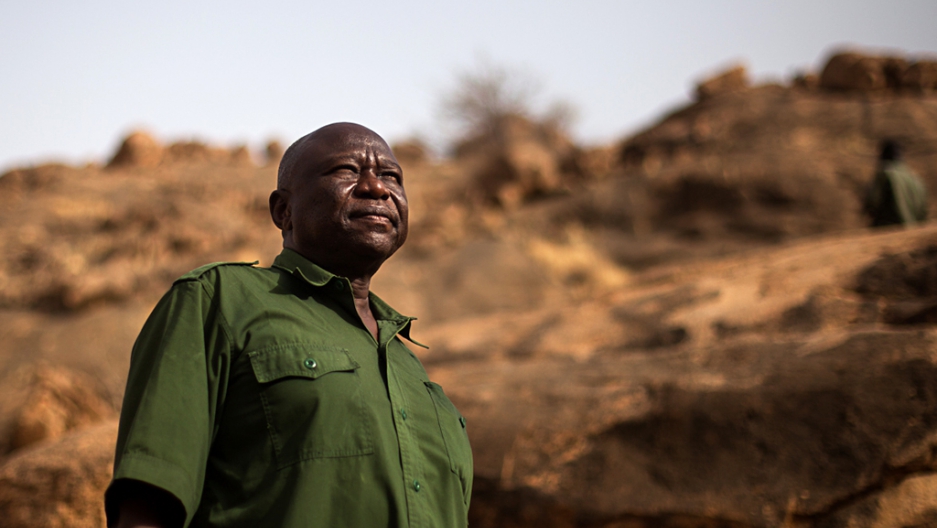 Because of the fight he is waging against the regime of Sudanese President Omar al-Bashir, he is hard to find. This interview was conducted at a base hidden in the Nuba Mountains of Sudan's South Kordofan state, from where he is directing an armed rebellion against Bashir’s government in Khartoum and against the Sudan Armed Forces (SAF).

GlobalPost: How did the civil war here in South Kordofan begin?

Abdulaziz Adam Al-Hilu: It’s now 10 months since June 5th 2011 when the National Congress Party of Khartoum decided to attack its own civilians in the Nuba Mountains just because Khartoum doesn’t want to implement the provisions of the [Comprehensive Peace Agreement of 2005] and the right of the Nuba people to popular consultations [on their future governance].

Khartoum decided to disarm the SPLA; we said ‘no’. Since then there is aerial bombardment, indiscriminate actually, in the villages, in the cattle camps, farms, everywhere. Also shelling using medium-range missiles. Also ground attacks targeting civilians. They burn villages, they destroy crops, loot cattle and all the property of civilians.

Since that time Khartoum denied access to relief workers and the international community, those who are interested in coming to assist the needy people in the Nuba Mountains. People are dying here.

How is the war progressing?

There is fighting everyday. We are controlling 90 percent of the countryside. They are there in the towns, in garrisons … dug in like rats inside their trenches, they are not free to move.

The nature of the terrain [is our best weapon]. Mountainous terrain is golden for guerrillas — you cannot defeat them, even in 100 years. This small hill is equivalent to 50 tanks. This is the problem for Bashir: he can just roll into Abyei with his tanks but not here, he has to shell us with 2,000 shells here in the place before he can capture this.

How can you afford to fight against the larger and better-equipped Sudan Armed Forces (SAF)?

Thanks to Bashir [and] SAF! It is Bashir who is supplying us [with equipment abandoned by the army]. They bring everything and leave it for us!

You can see we have their cars mounted [with machine guns], heaps of ammunition, shells, rockets, different types of guns. Sometimes we look for ex-SAF soldiers to come and train us because we didn’t see these things before.

What is the Sudan Revolutionary Front (SRF) — the new rebel coalition launched in November — and what is its aim?

The regime decided to attack us in Nuba Mountains and destroy us alone. This is the divide and rule policy, but they were not patient and decided also to attack Malik Agar and the SPLA in Blue Nile. We discovered that this regime is actually targeting everybody including the Darfurians. So we looked for the Darfurians and they looked for us and we made that alliance.

We sit together and we plan together, then we go for execution. We are at the phase of coordination rather than joint operations. That will come soon, but we need first to know each other, to test each other.

Our main objective is to expand the frontline from Ethiopia to Chad, to attack and overstretch the Sudan Armed Forces. We pin them down here, then we go behind the lines and we destroy their headquarters in Khartoum. We are going to Khartoum, we are confident to do that.

Is there any chance of a negotiated settlement with Khartoum?

We don’t need any agreement with Khartoum because they don’t honor agreements, the history of Khartoum in that is known. Our experience since independence [in 1956] is that Khartoum doesn’t honor or implement any agreement.

What do you see as the root cause of the conflict in the Nuba Mountains?

It is about diversity: Khartoum doesn’t want to recognize the diversity in the country. They are going for a monolithic type of state based on only two parameters, that is Arabism and Islam.

There is no place for anybody who is not a Muslim, who is not an Arab. This is why the center is attacking its own civilians and this is what led the South to secede [on 9th July 2011]. If people are not careful I think Sudan will break up.

Somebody like me, I am a Muslim but I am not an Arab. They say I must accept, I must put on a jellaba and turban and dance the way Bashir is doing!

What role has the international community played?

The international community has a problem with memory. This Bashir is the same one who introduced Osama bin Laden and Al Qaeda to the world, it is the same Bashir who made an attempt on the life of Hosni Mubarak, who attempted to destroy the World Trade Center in New York, the same Bashir who smuggles guns to Hamas, who created [the Lord’s Resistance Army]. It is this Bashir who has committed genocide: in the South 2 million killed, in Nuba Mountains 200,000, in Darfur 350,000.

In this conflict between the Nuba and the center we are not allowed to fight freely, there is intervention always … Always there is pressure on the South, on the Nuba, on the marginalized people, the poor people … They make us go to the table to talk but there is no action.

How will this end?

We are working for regime change, for complete transformation, for writing a new constitution, a democratic constitution that recognizes diversity, that accepts the liberal values of justice, equality, individualism. We want to achieve lasting peace and justice in this country.

Some may say we are not qualified to reach this but I think it is possible.