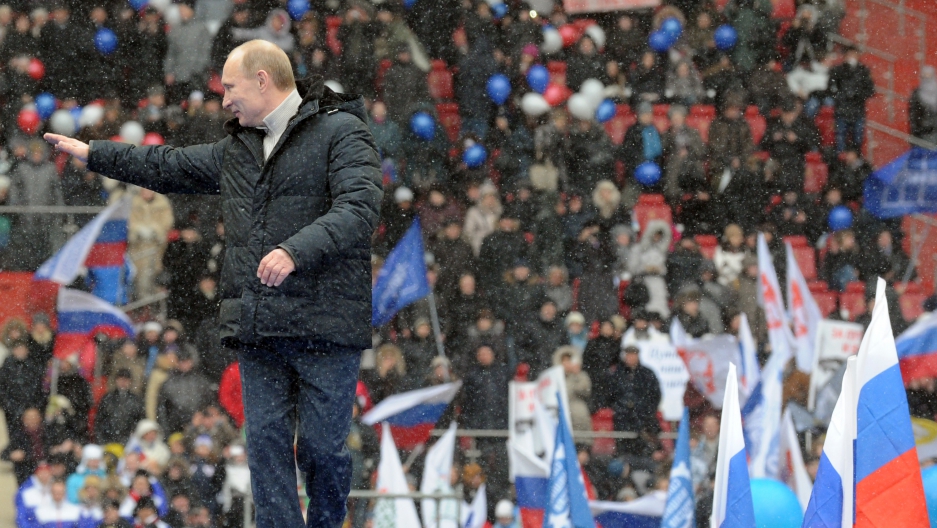 Russian Presidential candidate, Prime Minister Vladimir Putin gestures during a rally of his supporters at the Luzhniki stadium in Moscow on February 23, 2012.
Credit: YURI KADOBNOV
Share

The inauguration of Russian President Vladimir Putin on Monday was a lavish affair with vodka, caviar, crab and 5,000 bottles of champagne. But outside of Putin's Grand Kremlin Palace in Moscow, it was a different scene, with anti-Putin protesters continuing to clash with riot police, the Guardian reported.

Following the inauguration, several hundred people staged an overnight demonstration near the Kremlin offices. In response, Russian police detained two opposition leaders who helped organize the protest, Alexei Navalny and Sergei Udaltsov. Reuters described the detainees as "two of the most charismatic organizers."

Navalny and Udaltsov were later released. They then joined up with their supporters, who had moved on to another area. The roving protest has become a cat-and-mouse game between protesters and police, the Associated Press reported.

"If we are pushed away from here, we'll move to other squares," Udaltsov told the AP. "The objective is to have people on the squares every day who are struggling for freedom, for change. It is a very simple tactic, and I think it has a chance to bring a successful result."

Thousands of people have demonstrated against Putin's presidential victory for months, and the opposition has shown "unexpected resilience" recently even as the protest numbers have dwindled, according to the AP. Riot police detained 400 protesters in Moscow on Sunday and 300 more as Putin was sworn-in on Monday, Reuters reported. During the inauguration, riot police also began targeting the cafes where Russia's opposition happened to visit. The police stormed one cafe, overturned tables and grabbed patrons "seemingly at random," the Guardian reported. Three of Russia's state television channels, however, made no mention of the hundreds of protesters roaming the streets, according to the Guardian.