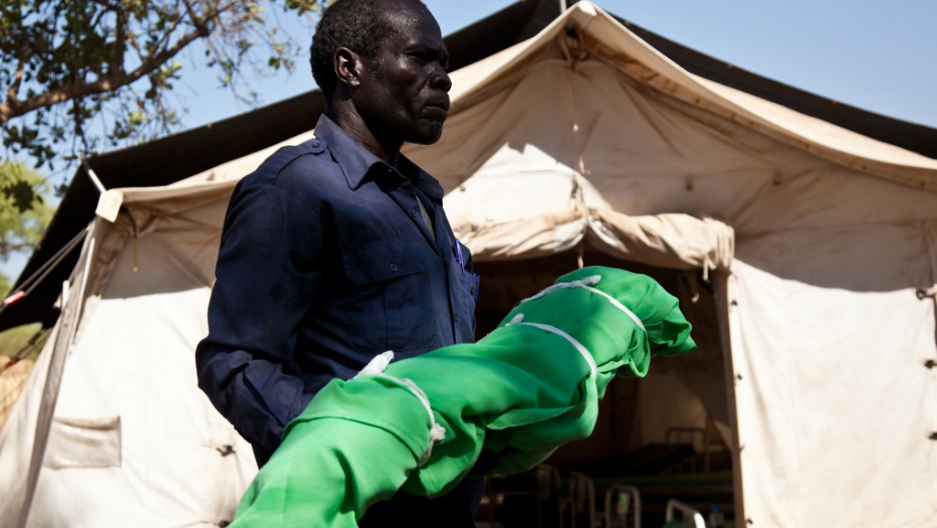 A man carries the body of a two-year-old girl at the Yida refugee camp nutrition center and hospital in Yida, South Sudan, on April 26, 2012. Thousands of people from the Nuba Mountains in South Kordofan, Sudan have fled to Yida to escape recent fighting and airstrikes by Sudan's Armed Forces (SAF).
Credit: Adriane Ohanesian
Share

NAIROBI, Kenya — Working in the Nuba Mountains of Sudan was, to me, exactly what foreign reporting is all about.

The story is an important one that remains under-reported, it is a difficult story to report because you have to sneak illegally into Sudan to see what's going on and it's dangerous because you travel through rebel-held territory during an active conflict. Of course I already knew what was happening in the Nuba Mountains, but that's not the same as seeing it for yourself.

Afterward, I left feeling profoundly depressed. Yes, the ordinary folk of South Kordofan were displaying remarkable resilience — incredible, really — in the face of the daily attacks launched by Khartoum; and, yes, the rebel army fighting to defend its land and its people had seemed motivated and disciplined, and its commanders had talked the impressive talk of democracy, freedom and human rights; and, yes, the landscape was one of desiccated beauty, hills and huge
sky; and, yes, the people had been open, welcoming and tolerant of my ignorance.

But with Sudan President Omar al-Bashir refusing to allow aid in — either across the border from the South, or down from Khartoum in the north —and continuing to bomb almost at random while the international community wrings its hands, or just sits on them, I realized it was too late.

Nobody, anywhere, should have to live in caves for safety, or dig foxholes next to their homes to protect against bombing, or eat leaves because there is no food.

Journalists go to report on where things are going wrong (hence the constant accusation that we focus on "bad news") in the hope that shedding some light will trigger some action. Maybe the recent flurry of media reports from the Nuba Mountains (mine included) will finally make the world sit up and do something. Or maybe not.

The families I met living in caves, eating leaves, are starving. To save them WFP — the only aid agency capable of it — needs to dump huge amounts of emergency food on South Kordofan but the border is shut to them, the skies are too dangerous and when the rains come in the next few weeks the roads will wash away. Access will be all but impossible until October.

Inevitably some of those now starving will die. I don't know how many but, whatever the figure, it will be too many. The time to act is not now, it was months ago. Now is already too late.

And not just for those stranded in the Nuba Mountains. Every day many hundreds of refugees are making it to Yida refugee camp, on the south side of the border, in search of food, medical care and help.

Ashia, a 2-year-old girl mentioned in Part 2 of my report, was all skin and bones but she was in a nutrition ward at a medical clinic when I met her, her mother and big brother. She writhed about painfully but she was hooked up to a drip and being treated for the malaria and diarrhea that had withered her little body. The nurse said he believed she would now quickly recover.

Soon after doing the final edits of my stories I was told that the nurse had been wrong: that Ashia had died.

Photographer Adriane Ohanesian, one of a small group of journalists with whom I had travelled to South Kordofan, captured a series of heart-wrenching photographs of her tiny silent body, eyes shut, as she was carefully swaddled in a green death shroud.

I had thought Ashia was one of the lucky ones.

In this war, it seems, there are none.