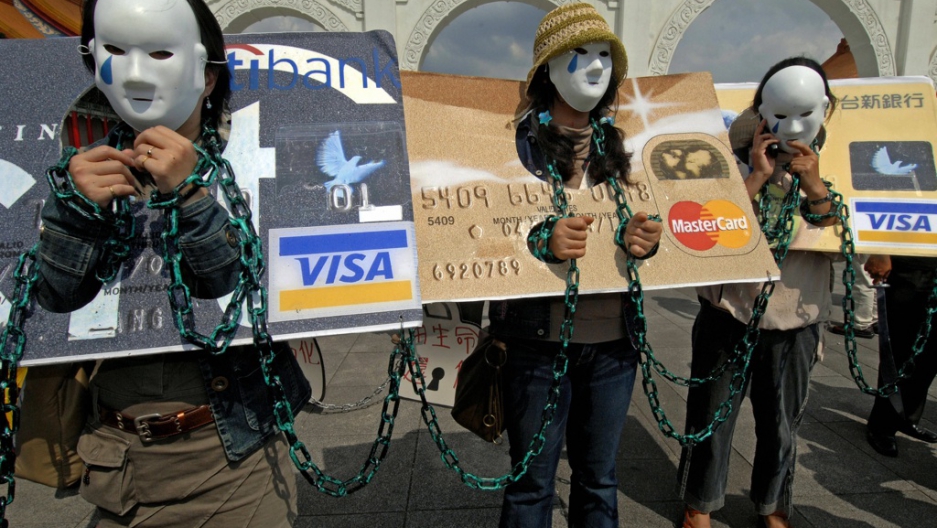 TAIPEI, Taiwan — The first thing police saw were the Chinese characters for “I hate … I would revenge,” smeared in blood on the wall of the third floor apartment.

What they saw next was pure evil.

Wu Yi-hsuan, a first grader at a local elementary school, had been stabbed repeatedly. Her 4-year-old brother Kuan-hsien, who suffered from cerebral palsy, was dead on the bed beside her.

Their mother, Lee Chia-hsin, who had been battling cervical cancer, lay in a pool of her own blood on the floor. The father, Wu Ching-hong, 37, was found with knife marks to his chest, a deep gash across his throat and blood on his hands. A blood-stained fruit knife and hatchet was recovered beside them.

Police say the doors were locked from the inside, and there were no signs of forced entry. They estimate the murders took place about a week before the bodies were discovered April 12.

“We think the father did it, and then cut his own throat. It seems that they had sizeable debts and he had recently lost his job. ... He just snapped,” said a detective, who spoke on condition of anonymity due to the ongoing nature of the investigation. “We’re undertaking interviews to see if he had a history of mental illness before this.”

Police believe Wu’s chest wounds were caused by his wife’s desperate attempt to protect herself and her children.

About a mile down the road, another family of four was found dead two days earlier — this time by carbon-monoxide poisoning. Police believe the parents murdered the children and committed suicide by burning coal inside their apartment after loan sharks came to collect on their bill.

“There are obviously some severe mental health problems at the center of these cases. But what’s most tragic is that they seem to be two poor, working families that just couldn’t survive anymore. These stories used to be about drug and gambling debts, not loans to pay the bills,” said Ivy Chou, a social worker in Taipei.

Chou says the murders highlight the dark side of Taiwan’s economic miracle: the gaping rich-poor divide. According to recent studies, about 1.5 million minimum-wage earners can no longer afford basic living costs in the island republic’s urban centers.

According to the Council of Labor Affairs, Taiwan’s minimum wage is about $660 — about the same as the average monthly rental fee for a one-bedroom apartment in Taipei. Skyrocketing property and consumer prices have caused real wages to fall despite GDP growth of about 45 percent over the past decade.

About 3.6 million people, roughly 40 percent of Taiwan’s workforce, earned a monthly salary of less than $1,000 in 2011. Over a million of them brought in less than the minimum wage. And that’s tough to live on when a liter of milk costs $3.

“A worker on minimum wage cannot survive in Taipei. That’s a fact. And it’s the main reason why loansharking is a thriving business in the city,” says labor activist Ying-dah Wong. “The minimum [wage] has been raised a few times since 2000. But they are incremental raises. The government is hoping to hide behind the numbers. If you look at South Korea, Japan and Hong Kong, three economies which share similar growth trajectories to Taiwan, their wages rose as inflation and costs of living increased. This is not the case here.”

Taiwan, like most Asian countries, is fiscally conservative. Critics say that both of the island’s dominant political parties view social welfare, and unemployment benefits in particular, as handouts. That line of thinking, they say, has left employees without a safety net, increasing workplace stress and encouraging unscrupulous employers to use job preservation as a bargaining chip to slash pay and benefits, while increasing overtime and workloads.

Meanwhile, Taiwan has no shortage of cash. Despite being home to only 23 million people, it had $418.4 billion in foreign and gold reserves at the end 2011, according to the CIA World Fact Book. That's the fifth-highest reserve rate globally.

However, the Council of Labor Affairs’ Bureau of Labor Insurance also reported over the same period that the government only paid out $204 million in unemployment benefits to more than 286,000 applicants, a 40 percent decrease over a year earlier. The majority of Taiwan's unemployed have their assistance applications rejected by the bureau.

“There are supposed to be social services such as unemployment and other trappings of the welfare state, but actually they have been designed as charity and not as fundamental workers’ rights. Families that are supposed to get workers or emergency aid actually get nothing. They can only rely on themselves for help,” says Hsin-Hsing Chen, associate professor of social transformation studies at Taipei’s Shih-Hsin University.

Chen claims that real wages are “much lower than 20 years ago.” A college education doesn't help much; Chen says most of his graduating students have already resigned themselves to “lifetimes of minimum-wage-paying jobs.”

Analysts say that the hollowing out of the labor movement by union-busting industries in the '80s and '90s and the trumpeting of economic growth at all costs by the media and successive administrations has led to a “factory mentality” in the country. Workers are too scared to complain, and they view employers as “a better ruling class.”

Terry Guo, the founder of much maligned Apple supplier Foxconn, is a case in point. While Guo has become a poster child for Asian labor exploitation in the west, in Taiwan he has been feted as something of a hero, a sage of the business world, whose public backing of President Ma Ying-jeou in January’s elections helped the former Harvard grad secure a second term.

For years, Taiwanese workers have voted for Guo — who has referred to his workers as “animals” and routinely forces employees to stand during meetings when he doesn’t agree with them — as one of the best bosses to work for in labor surveys.

“That’s our situation. It’s been this way for 30 years, and has had a pretty strong influence on the mentality of the working people. There was this idea that perhaps I could become a boss one day, so it’s better not to rock the boat,” says Chen.

“It’s depressing. But what’s more depressing is the way they just take it."

Despite the lack of a social safety net, the government does have ideas, however unconventional, for how to help the downtrodden.

The Department of Health has announced that it wants to lower suicide rates by asking shopkeepers to lock up charcoal sold in their stores. Medical Affairs Bureau Director Shih Chung-liang says store clerks should “monitor people who only purchase” the fuel.

There was no word on whether the DOH would expand funding for mental health programs.