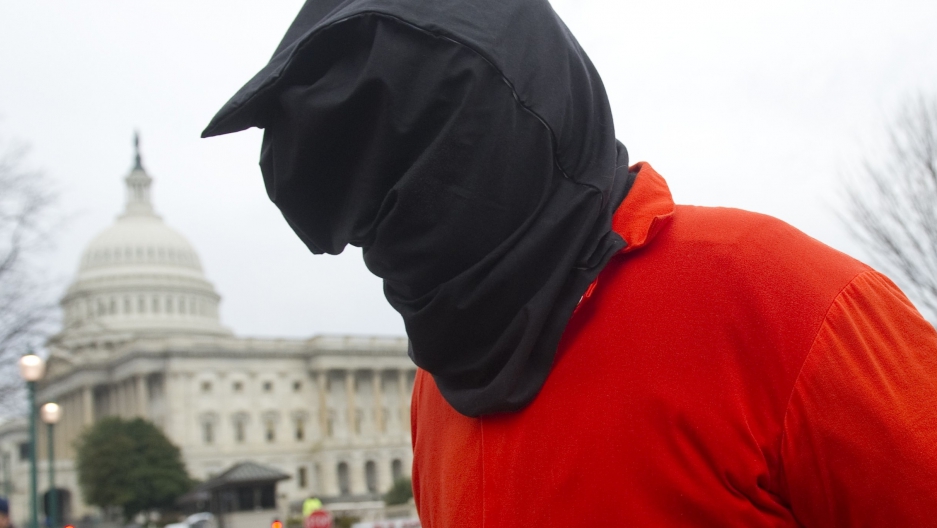 A protester dressed like a Guantanamo prisoner demonstrates against holding detainees at the US military prison in Guantanamo Bay during in front of the US Capitol in Washington, DC, on Jan. 11 — the 10th anniversary of the arrival of the first group of detainees to be held at the prison.
Credit: SAUL LOEB
Share

As the military court gears up to try the alleged Al Qaeda terrorist who infamously boasted he planned the 9/11 attacks “from A to Z,” the US may also find itself put on a trial of sorts — in the court of international opinion.

Khalid Sheikh Mohammed — a Kuwaiti-born Pakistani who has also claimed he murdered American journalist Daniel Pearl — and his four alleged co-conspirators will go before a judge in Guantanamo’s “war court” on May 5 for an arraignment.

The hearing will jumpstart court proceedings that could give insight not only into the shadowy world of Al Qaeda but also into the US government’s controversial use of “enhanced interrogation techniques” in the name of fighting terror.

This is not the first case to go before the war court — some half dozen others have been carried out since the detention center opened — but it is expected to draw the most international attention, and the most scrutiny.

“This case will be a big test for the Military Commissions system, because these defendants will attract such wide attention,” Matthew Waxman, a professor at Columbia Law School and former Bush Administration policy adviser on detainee issues, wrote in an email. “This case is challenging for prosecutors for many reasons, but it's also an opportunity to demonstrate the credibility of the system.”

Skeptics say the military commission is inherently unjust, weighted against the defense by a military jury and lax hearsay rules that could make it tougher for defendants to confront the witnesses against them. For defenders of the war court, this is a chance to show the world that the system works — that the US is capable of meting out justice to detainees who have for years been held in the infamous prison in Cuba.

It’s a process complicated by the issue of torture.

Critics accuse the US government of using the military court to gloss over the fact that it subjected prisoners to waterboarding, attack dogs, sleep deprivation and other harsh methods in an effort to glean information about terror operations.

Declassified CIA memos show Mohammed was waterboarded — in which water is poured over a bound captive’s face to simulate drowning — 183 times while being held in the agency’s secret prison system before arriving at Guantanamo in 2006. That’s a point legal experts say the defense attorneys will emphasize as much as possible.

Karen Greenberg, director of the Center on National Security at Fordham Law School in New York, said the case is so tainted by torture that she believes it would be impossible to try in a federal court.

“Even if torture never comes up, torture is everything in this case,” Greenberg said in a phone interview. “It is the only reason the defendants are being tried at Guantanamo.”

More from GlobalPost: A former Gitmo guard and prisoner reunite in England

It wasn’t supposed to be this way. When President Barack Obama took office in 2009, he immediately ordered the notorious prison closed and prisoners transferred to the federal system. Mohammed and his accused co-conspirators were already facing a military trial at the time. Prosecutors withdrew the charges, and Attorney General Eric Holder vowed to build a case that would stand up in civilian court.

But that plan died amid political outcry, mostly from politicians who contended transferring high-profile terror suspects to US soil would endanger Americans. Congress eventually banned funding for such transfers.

Military prosecutors refiled the charges in 2011, and they were referred to the military commission last month, setting the case on a path to the Guantanamo war court system established by former President George W. Bush and reformed by Obama.

All five men are charged with eight counts related to planning and executing the 9/11 attacks that killed nearly 3,000 people. If convicted, they could face the death penalty.

In a recent 60 Minutes interview, Jose Rodriguez, former head of the CIA's Clandestine Service, defended the harsh interrogation tactics that have become synonymous with the offshore prison.

“We made some Al Qaeda terrorists with American blood on their hands uncomfortable for a few days,” he told the CBS news program. “But we did the right thing for the right reason. And the right reason was to protect the homeland and protect American lives.”

Even if the defendants were acquitted or given light sentences, legal experts say it’s unlikely they’ll ever go free.

While some Guantanamo prisoners have been returned to their home countries or “resettled” elsewhere, the US government considers Mohammed and the others far too dangerous to release.

Classified as “enemy combatants,” detainees like Mohammed can be held as long as the US is engaged in armed conflict in the war on terror, the government contends. Under the laws of war, the Guantanamo prisoners don’t even have to be charged or given trials, according to the government.

That’s a sticking point for Guantanamo critics who say indefinite detention renders the military trials little more than a façade of justice.

“If the defendants are acquitted or complete their sentences, they should be released. This is a basic principle of any justice system,” Andrea Prasow, senior counterterrorism counsel for Human Rights Watch and former defense attorney with the Office of Military Commissions, wrote in an email.

“The US government’s argument that there is some undefined, decades-long armed conflict is simply wrong,” Prasow said. “More important, holding anyone after he completes his sentence or after acquittal would send a strong message to the world that these trials are simply political trials.”