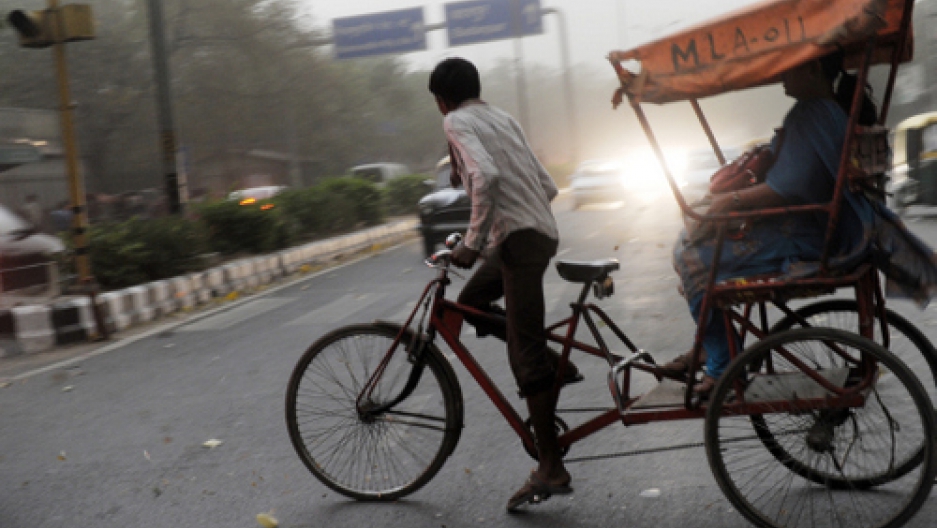 Zero emissions: Some Indian communities, and even rickshaw pullers, are fighting for their right to walk and bicycle.
Credit: ROBERTO SCHMIDT
Share

Millions more Indians travel by foot, bicycle and bus than travel by car, but you'd never guess it from the design of India's cities or the allocation of government funds.

A handful of interesting organizations are fighting for the rights of zero emitters, however. The Center for Science and Environment magazine Down To Earth reports that a number of groups, ranging from rickshaw pullers in the Punjab to bicycle crazy yuppies in Haryana are working to influence policy makers and change the way India thinks about urban infrastructure.

It looks like a long haul, though. Down To Earth writes: Over the past decade, laws have banned cycle rickshaws from prime areas of many cities to make room for cars.

Delhi is fighting a bitter battle to protect its 0.6 million cycle rickshaw fleet as Delhi Municipal Corporation (Cycle-Rickshaw). By-laws of 1960 restricted their number to 99,000 in ear-marked zones. The law has also empowered authorities to confiscate, crush and sell rickshaws if they are found plying without a license.

But reprieve came from the Supreme Court when in its April hearing of the public interest petition it quashed the civic body’s bid and castigated it for taking away the right of the “weak and meek.” The apex court asked the municipal corporation, “Are you prepared to scrap cars? Impound those involved in drunken driving or even remove them from roads, say for a period of 10 years?”

In 2008, Kolkata curtailed bicycles on 39 key roads following a notification issued by the city’s police. It states that with a view to “providing safe and uninterrupted movement of vehicular traffic, we hereby order that no bicycle shall ply or remain standing between 9 am and 7 pm on all days.”

Activist Debasish Banerjee of Kolkata laments, “It is ironical that while globally cities are bringing back bicycles and trams, Kolkata despite its rich legacy is letting them decay.”

Moreover, public spending is the opposite of green: The National Urban Transport Policy has made the right noises about promoting walking and cycling. However its funding arm, the Jawaharlal Nehru National Urban Renewal Mission, has played spoilsport.

Almost the entire booty so far has been given for roads, flyovers and parking structures. Only a few small-scale projects in smaller cities like Nanded in Maharashtra have seen some transformation of its footpaths and cycling paths.

Currently, the Union Ministry of Urban Development is framing a public bicycle sharing scheme. But the Planning Commission has already argued against it, citing lack of funds.