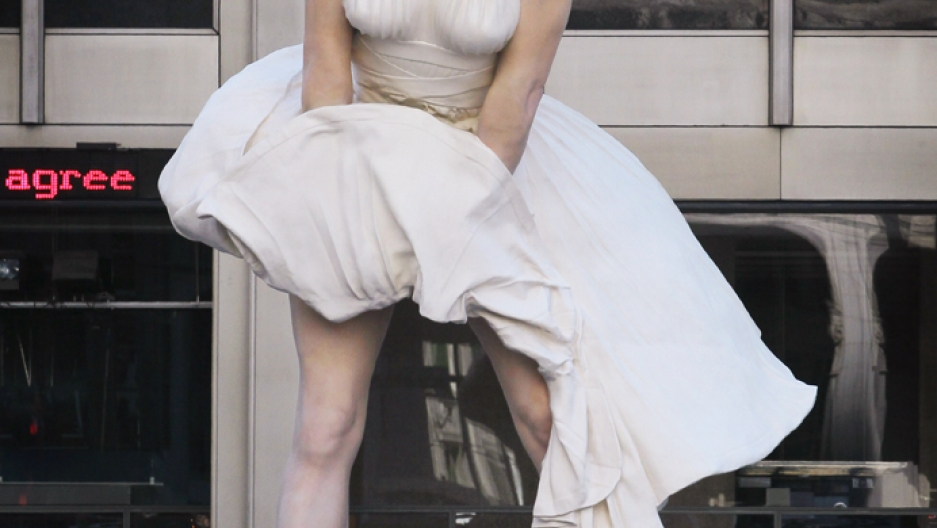 Spectators look at "Forever Marilyn," a sculpture by Seward Johnson, on July 15, 2011 in Chicago, Illinois. The stainless steel and aluminum sculpture which stands 26 feet tall and weighs 34,000 pounds will be on display in Chicago through May 2012, when it will move to Palm Springs, CA.
Credit: Scott Olson
Share

LOS ANGELES — A giant statue of Marilyn Monroe is headed a little bit closer to Hollywood at the end of May, NBC Chicago reported.

The 26-foot piece of public art by Seward Johnson, titled "Forever Marilyn," will leave its home in Chicago's Pioneer Court to be installed in Palm Springs, California. It will bask in the Southern Californian sun until June 2013, Art Info reported.

The Monroe statue captures the sensual actress' iconic scene from the 1955 film "The Seven Year Itch," when Monroe's white dress is blown up by air from a subway grate.

The work has been controversial in Chicago, with some city dwellers calling the statue sexist or ugly, according to entertainment website TheWrap.com. It was even named one of the top 10 worst pieces of public art in the US, the Huffington Post reported, and became a popular target for vandalism.

Nonetheless, it was a huge draw for both locals and tourists seeking photo opportunities soon after its installation in July 2011.

"Even worse than the sculpture itself is the photo-op behavior it's inspiring," film critic Roger Roeper wrote in the Chicago Sun-Times when the statue was first installed. "Men (and women) licking Marilyn's leg, gawking up her skirt, pointing at her giant panties as they leer and laugh. It's not that the sculpture is shocking or sexist or obscene - but it's definitely bringing out the juvenile goofball in many of us."

Despite the mixed reviews, Johnson was happy his work got a buzz going.

"I have thoroughly enjoyed seeing the variety of reactions to the sculpture," Johnson said in a statement, NBC Chicago reported. "The city of Chicago is richly appreciative of public art in all its forms and is a model for other cities to follow."

We have to guess Palm Springs will welcome the Old Hollywood star with open arms.