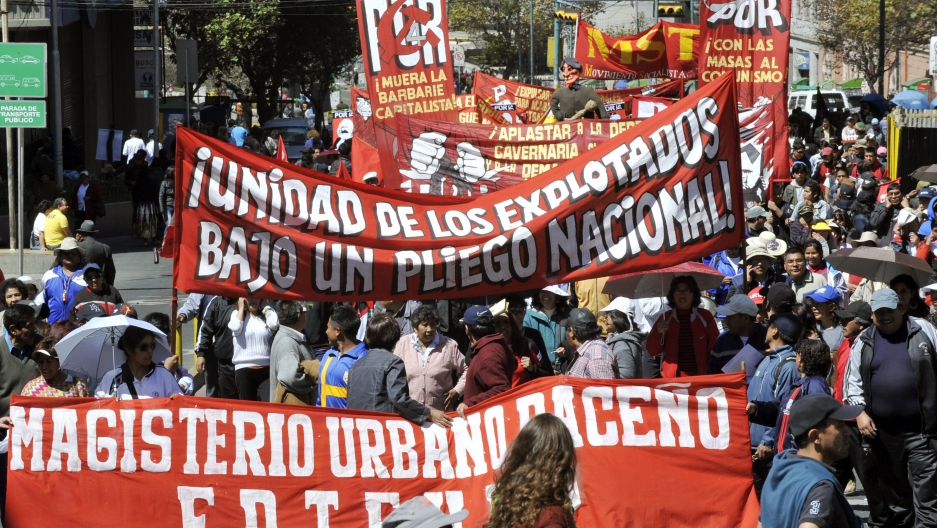 The president, an avowed socialist, ordered the seizure of the assets of Madrid-based firm Red Electrica in Bolivia as part of his stated policy of bringing strategic areas of the impoverished Andean nation’s economy under state control.

Until Tuesday, the Spanish utility owned 99.94 percent of Transportadora de Electricidad (TDE ), the company that has run Bolivia’s creaking transmission grid since 1997 when the electricity sector was privatized.

“As a just homage to the entire Bolivian people, which has struggled for the recovery of its natural resources, its basic services, we are nationalizing Electricity Transporter in the name of the Bolivian people,” Morales said in a televised address.

He went on to accuse the Spanish company of investing just $81 million in Bolivia’s transmission grid in the last 16 years. The company did not immediately make a public statement on the nationalization.

Morales chose to make the move on May 1, Labor Day, which is a national holiday in Bolivia. It also comes just two weeks after the leftist government of Argentina President Cristina Fernandez de Kirchner sparked a major international outcry by nationalizing YPF, the local subsidiary of Spanish oil company Repsol.

The news comes as yet another blow to Spain’s stalled economy. Unemployment is at 24 percent while the government is slashing public spending in a desperate effort to bring the national debt under control and avoid being booted out of the euro zone.

Despite that, the conservative government of Prime Minister Mariano Rajoy in Madrid appeared keen to play down the loss and smooth over any differences with La Paz.

“The case appears different from YPF and we cannot make comparisons. The [Spanish] government wants to underline its firm decision to defend Spanish companies.”

That reaction contrasted starkly with the fierce response both from Madrid and the European Union to Argentina’s seizure of YPF. Brussels has talked of trade retaliation and other harsh critics of the move have ranged from Peru’s finance minister, who called it “insane,” to the Wall Street Journal, which dubbed it “theft.”

Ironically, the TDE nationalization came on the very day that Repsol was due to begin operating a new gas processing plant in Bolivia, helping to supply its abundant natural gas to neighboring Argentina.

“I am convinced that it [Argentina’s nationalization of YPF] will not influence Bolivia in any way, because our signed agreements are between the companies and have the trust of the governments of Spain and Bolivia,” Morales said recently, implying that Repsol had nothing to fear in the landlocked Andean nation.

Repsol is Spain’s largest oil company and YPF was by far its largest overseas asset, representing 40 percent of the company’s oil reserves and half its production.

More from GlobalPost: Bolivia’s Morales set for another showdown

Morales, Bolivia’s first indigenous president despite its indigenous majority, nationalized the country’s power plants two years ago, its telecommunications four years ago, and its oil and gas industries six years ago.

Shareholders were compensated but Bolivia is still facing several major international lawsuits. In March, British power company Ruralec lodged a claim before the Permanent Court of Arbitration, in The Hague, Netherlands, demanding $142 million in compensation.

Wildly popular in the past, Morales may now be hoping that the seizure of TDE will boost his sagging approval ratings after a series of confrontations with the poor and indigenous voters that swept him to the presidency.

Last year he was forced to apologize after police brutally attacked a peaceful march of Amazonian tribes people protesting against plans to put a freeway through the rain forest reserve where they live.

And in 2010, he was also forced to back down after a brief attempt to remove 73 percent subsidies for gas and diesel sparked national riots.