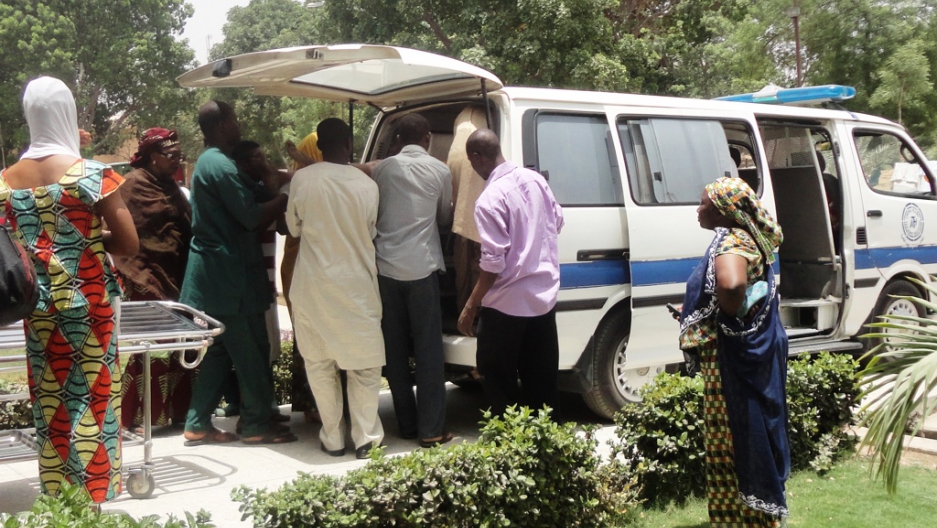 A seriously injured victim of a shooting is taken out from an ambulance outside the emergency unit at the Aminu Kano Teaching Hospital, in northern Nigerian city of Kano, where christian worshippers were killed and others seriously injured in attacks on two church services on April 29, 2012. The attack left at least 16 people dead and 22 people seriously injured.
Credit: Aminu Abubakar
Share

The continuing extremist violence in Nigeria is putting pressure on President Goodluck Jonathan to come up with effective policies to control it.

At least 16 people were killed in Nigeria Sunday when a series of bombs went off at a Catholic church service in the northern city of Kano.

The Islamist extremist sect, Boko Haram, is suspected of carrying out the bombings, reported Associated Press.

The Sunday explosions took place at Bayero University near a theater where Catholics were holding a service.

At least three small bombs exploded and when panicked worshippers fled the service they were hit by gunfire, said Abubakar Jibril, a spokesman for Nigeria's national emergency management agency, according to AP.

Police say the attackers fled on motorcycles before security personnel arrived on the scene, reported Voice of America.

No group immediately claimed responsibility but Boko Haram is suspected because the bombs were aluminum soda cans packed with explosives, a type of device previously used by Boko Haram.

The attack comes as Nigeria faces a growing sectarian battle between its weak central government and Boko Haram, reported The Guardian.

Boko Haram is blamed for killing more than 450 people in Nigeria this year alone, according to AP.

In January, a co-ordinated Boko Haram assault on government buildings and other sites in Kano killed at least 185 people. In the time since, the sect has been blamed for attacking police stations and other smaller targets in the city.

On Thursday, Boko Haram carried out a suicide car bombing at the Abuja offices of influential newspaper ThisDay and a bombing at an office building the paper shared with other publications in the city of Kaduna. At least seven people were killed in those attacks.

Boko Haram is reported to have links with two other Al Qaeda terrorist groups in Africa: Al Qaeda in the Islamic Maghreb which is operating in Mali and other neighboring countries and Al Shabaab in Somalia.

More from GlobalPost: US supports Nigeria against Islamist militants