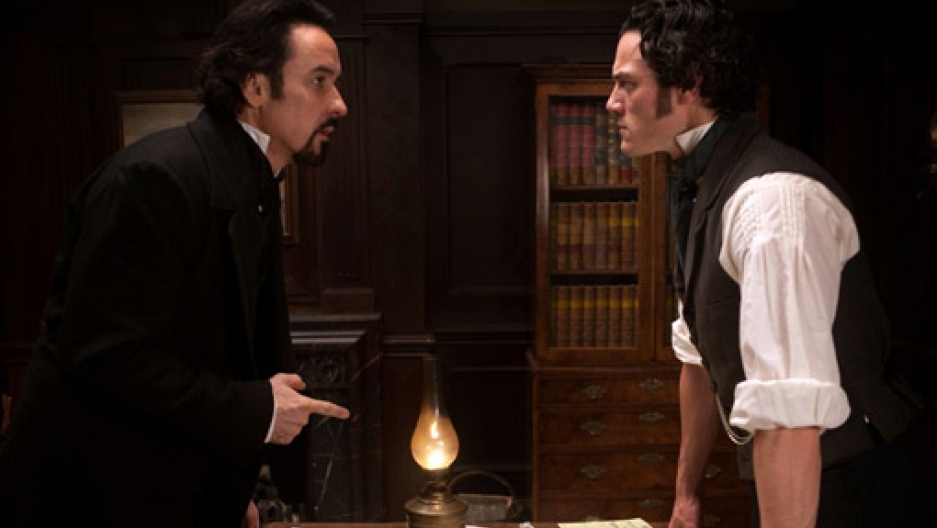 'The Raven,' starring John Cuskack is one of several new movies out in theaters this weekend.

There are plenty of big movies out this weekend, from the romantic comedy "Five Year Engagement" to the claymation kids movie "Pirates: Band of Misfits."

None of them will break box office records, but they add up to lots of choices for you if you're thinking about heading to the theaters.

"Engagement," starring Jason Siegel and Emily Blunt, was produced by the popular Judd Apatow. But that might be enough for this movie. Rafer Guzman, film critic for Newsday, said this movie might actually be "the death of the romantic comedy."

"This is a movie about two people who are trying to get married but can't for no other reason than they can't get their act together," Guzman said. "I find that completely uncompelling."

Kristen Meinzer, culture producer for The Takeaway, though, said she liked the movie.

"Sometimes it's amazing when problems are organic and they're character-driven," she said.

Whereas Engagement might be described as realistic, "The Raven," starring John Cusack, would never be accused of that. Edgar Allen Poe, author of the novel The Raven, finds himself in the middle of a murder-mystery, perhaps of his own making.

In this case, though, Meinzer was the one who wasn't a fan. In fact, she says, she hated it.

Guzman said Cusack was quite good in the movie — perhaps a redeeming quality of the film.

"I thought this movie, it's extremely grisly, but it's pretty entertaining," he said. "It's like CSI Baltimore 1849. I thought it was perfectly fine."

Also out this weekend is Safe, a movie about a young girl pursued by a gang, the Russian mob and corrupt New York police because of something she has in her memory. It stars Jason Statham, Catherine Chan and Chris Sarandon.

Guzman said he's excited for the movie. Statham plays a hard-luck cage fighter who winds up protecting the little girl as they try to escape the gang war.

"This is one of the best action films I've seen in a long time," Guzman said. "It's funny, it's hard-hitting, it's nasty, it's violent. I thought it was really good."

Then there's "Pirates," which was produced by the same folks who produced the Wallace and Gromit movie.

"I really liked this movie," Guzman said. "Some very good voice work. Wonderful clay animation in this movie. My only objection is that, for a kid's film, there are a lot of jokes about history. So you have a lot of very funny, wry jokes about Jane Austen and the Elephant Man; I'm not sure how that's going to play with your average American nine-year-old."

Meinzer liked it as well, but also questioned whether it would really connect well with kids. She said it may be just too slow for them and their cultural touchstones.

"But I think most grown-ups will nod knowingly and maybe smile a little bit. You'll enjoy it if you're a grown-up," she said.

Guzman went so far as to say adults should see the movie, even if they don't have kids.

"What it is, is Monty Python and the Holy Grail," he said. "With pirates."