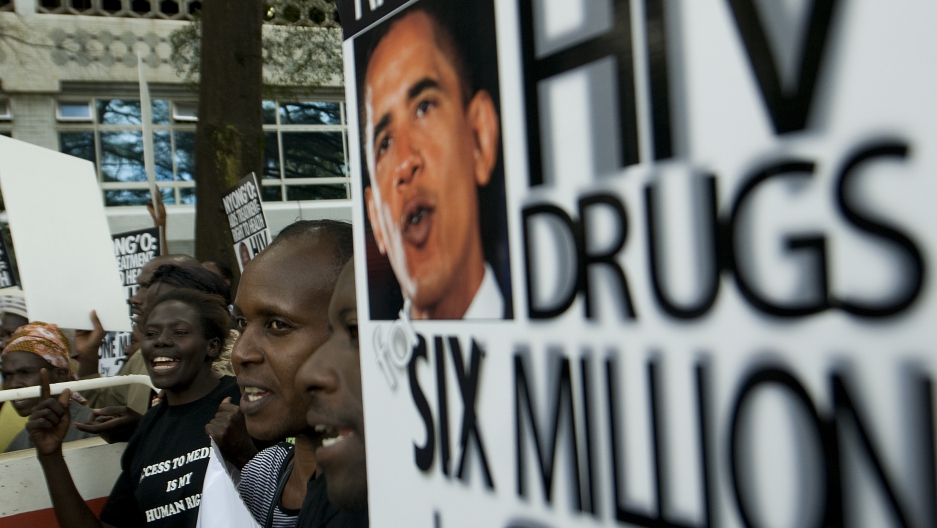 HIV/AIDS activists, some of them living with the virus, yell during a demonstration April 25, 2012 in Nairobi on the sidelines of a joint conference sponsored by the US Embassy here and Kenya's Vision 2030 program. The activists demanded that the US and the Kenyan government work together to utilize some 500 million of unspent PEPFAR funds to get desperately needed HIV treatment to more Kenyans.
Credit: Tony Karumba
Share

WASHINGTON — It’s not often — actually, never — that the US government has nearly $1.5 billion in freed-up money to redistribute for a global health program. But the Office of the Global AIDS Coordinator acknowledgement to GlobalPost last week that it would be looking at new ways to spend that huge windfall of international funding has drawn almost no comment from normally outspoken AIDS activists in Washington or around the United States.

More than 400 AIDS activists demonstrated in Nairobi on Wednesday to demand that the US government spend roughly half a billion dollars to programs in Kenya, according to a report by PlusNews.

The GlobalPost account found that Kenya had by far the most difficulty of any country in spending its AIDS money in a timely fashion. Dr. Eric Goosby, the US global AIDS coordinator, said that the $1.46 billion identified as languishing in the US Treasury for 18 months or more would be recaptured and earmarked for new programs. He indicated to GlobalPost that much of the money would be taken from one country’s pot and put into another, but some activists have said privately that Goosby and others told them that much of the money could stay put — but for a different use.

The Kenyan protesters hope it stays in country. PlusNews indicated, though, that Kenyan activists believe it’s the US government’s fault for not spending the money; Goosby attributed it to the bureaucracy of Kenya’s two ministries of health.

Rose Kaberia, director of the International Treatment Preparedness Coalition (ITPC) in Eastern Africa, told PlusNews: "'We are protesting the US government's withholding of crucial funding for HIV programs in the country. Last year, [special programs minister] Esther Murugi pledged that the government would put one million Kenyans on HIV treatment by 2015 — without this funding, that goal cannot be achieved.”