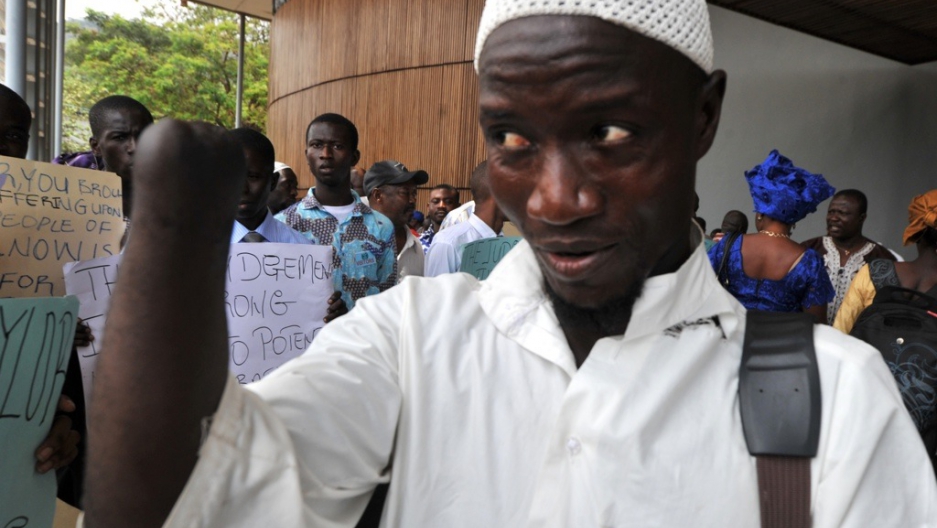 MONROVIA, Liberia — Hundreds of Liberians gathered around handheld radios and shop television sets in the streets of the capital to hear the news that former president and warlord Charles Taylor was found guilty of 11 counts of war crimes.

Bitter arguments broke out as many denounced the verdict but others praised it.

Those angered by the guilty verdict remain staunch supporters of Taylor and they charged he was already deemed guilty prior to the trial.

"It's a conspiracy," declared Amos Dahn, 25. "I'm calling on the international community to know, at this moment, that this verdict they passed is not fair."

Some were suspicious because the trial was held in distant Netherlands.

"They gave the verdict today on the eve of Sierra Leone's independence, so they can start celebrating in Sierra Leone," said Jewel Ama Hansford, 22. "It was pre-planned."

However other Liberians welcomed Taylor's conviction.

"They should give him 50 years minimum for the killing of the people of Sierra Leone. That's what we pray for," said Nathaniel Toe Jr., 40.

"Today is a day of victory for human rights, victory against killing," said Toe. "The respect for human rights is the foundation for justice, peace and truth everywhere. No Liberian president will ever attempt repeating what Taylor did."

Perched on office balconies above the throng, those elated with the outcome pointed to the blue sky, sun and a rainbow that appeared despite the absence of rain.

"The verdict has been interpreted by the sign of the rainbow," said Melchizadek Toe, 37. "In Liberia, people generally say, 'lie in one, lie in all.' Once Taylor is held accountable for some of the crimes, then he should bear the punishment for all."

"The verdict signals hope for Liberians who were victims of the civil war here that, five to six years from now, they too will get justice," said Weah. "The International Court of Justice is increasingly becoming robust, and other leaders can take heed from the Taylor verdict."

In neighboring Sierra Leone, the reaction was much more positive to the news of Taylor's verdict. Thousands also celebrated Taylor's conviction for his role in the conflict that left thousands in the country amputees and traumatized former child soldiers, reported Associated Press.

Sierra Leonean officials set up special viewing sites so the public could see the verdict as it was read from the Netherlands.

"I am happy that the truth has come out ... that Charles Taylor is fully and solely responsible for the crimes committed against the people of Sierra Leone," said Jusu Jarka, who lost both of his arms in 1999.

Taylor's conviction shows that no one is immune from the law, according to Human Rights Watch.

“Powerful leaders like Charles Taylor have for too long lived comfortably above the law,” said Elise Keppler, senior international justice counsel at Human Rights Watch. “Taylor’s conviction sends a message to those in power that they can be held to account for grave crimes.”

“Sierra Leone victims suffered terribly during the conflict, and this verdict will give a measure of redress to them,” Keppler added. She said there has been a “justice vacuum in Liberia,” and Sierra Leone’s special court could serve as a model for pursuing justice in that country.

"The message is that there is nowhere left for murderous despots to hide," wrote Mark Malloch Brown in the Financial Times, calling the verdict "an extraordinary step forward in global accountability and responsibility." Brown said the verdict should be celebrated "by copying President Truman’s old White House office desk sign, 'The Buck Stops Here' and sending it to all world leaders starting with A for Assad and completing with Z for Zimbabwe."

As someone who saw Taylor in Liberia and Sierra Leone in 2001 to 2003 "mixing with child soldiers, gun runners and diamond smugglers," Alex Vines, of the Royal Institute for International Affairs in London, said the case against Taylor has helped stabilize both countries.

"I would never have imagined the positive transformation Sierra Leone and Liberia have enjoyed over the last decade. Massive challenges remain but both countries are peaceful with fast growing economies," said Vines. "A key reason for almost a decade of peace in both countries was the containment of Charles Taylor through UN sanctions, military action, and the indictment by the Special Court."

Taylor was first indicted on war crimes in 2003. The trial lasted three-and-a-half years, and judges at the UN-backed Special Court for Sierra Leone have taken 13 months to reach a verdict.

The sentence is expected on May 30. Taylor will serve his time in a United Kingdom prison. The Dutch government agreed to host his trial at The Hague as long as any jail term was served in another country.

The Special Court for Sierra Leone was set up in 2002, at the end of the civil war in which some 50,000 people were killed and thousands more badly mutilated, with limbs hacked off.

Thirteen people were originally indicted, but three suspects died before their trials, and one remains missing.

The Taylor trial is a landmark case in that it is the first time since the Nuremberg trials that an ex-president received a verdict on charges of serious crimes of international law.

Former Ivory Coast President Laurent Gbagbo is in jail awaiting trial at the International Criminal Court, and Sudanese President Omar al-Bashir has been indicted by the ICC on charges of genocide in Darfur. Ex-Yugoslav President Slobodan Milosevic was on trial but he died before his war crimes case had reached a conclusion. The ICC is currently hearing six other cases, all relating to crimes committed in Africa, including from Uganda, Kenya and the Democratic Republic of the Congo.

Taylor’s trial at The Hague continued for so long that media attention waned, except for a significant spike in interest when feisty supermodel Naomi Campbell testified in 2010.

Campbell told the court she had received a gift of “dirty-looking” raw diamonds from unknown men, assumed to have been sent by Taylor, after a 1997 celebrity dinner hosted by Nelson Mandela in South Africa. The defense claimed this was only speculation.

John Jukon, chairman of the Liberia Non-Government Organizations Network, noted that some critics argue the money spent on Taylor’s trial could have been used to help Sierra Leone’s poor. He said a 15-day survey will measure the overall impact of the special court on Sierra Leone and Liberia.

“We want to assess the legacy of the court, and identify any problems,” Jukon said.

The Open Society Justice Initiative said it will summarize Taylor's verdict in simple language and hold local meetings in Uganda and Sierra Leone to discuss the findings.

The organization, backed by billionaire George Soros, said this “will help ensure that justice is not only done, but that it is also seen to be done.”

Ian Smillie, a leading conflict diamonds expert who was called as a prosecution witness during Taylor’s trial, highlighted the devastation caused by trade in “blood diamonds.”

“The unregulated trade in diamonds through the 1990s led to the deaths ... of millions of people,” he told GlobalPost during the trial. “The carnage was enormous and the effects will last for a long time. ... Diamonds didn’t cause the wars, but they fueled them.”

Erin Conway-Smith contributed to this report from Johannesburg, South Africa.