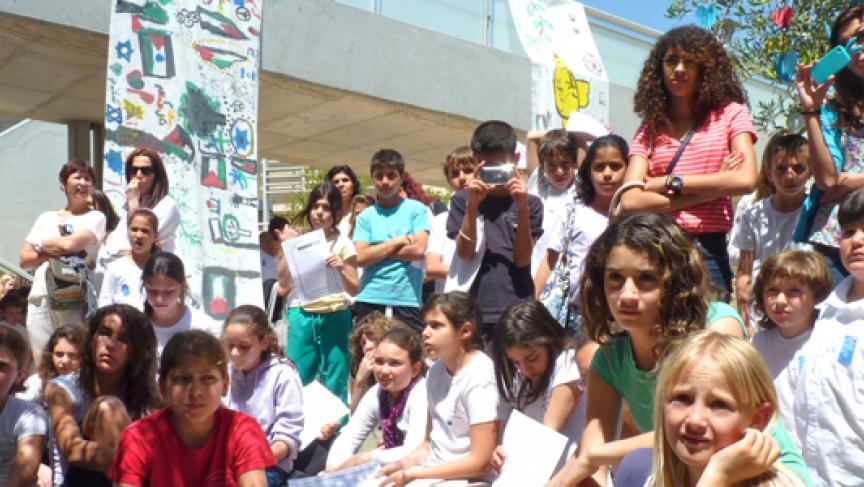 It's a rare sight for Jewish and Arab students in Jerusalem to come together to mark Israeli Memorial Day. (Photo: Matthew Bell)

Share
Israelis are celebrating their two biggest state holidays this week. They go together: Independence Day is Thursday. That's the day Israel declared itself an independent state. Wednesday is Remembrance Day, when Jewish Israelis come together to mourn the deaths of fallen soldiers and victims of terrorism. But the day also highlights deep divisions between Israel and the Palestinians, even for those trying to promote peaceful co-existence between the two sides. About 2,000 people took part in an "alternative" memorial day event last night in Tel Aviv. The idea was to honor all people who died in the Mideast conflict, both Israeli and Palestinian. A group called "Combatants for Peace" organized the event. They're former Israeli soldiers and Palestinian militants. Mohammad Aweida is a Palestinian from East Jerusalem who spent time in an Israeli jail. Even on this difficult day of the year, he says, Jews and Arabs still share the experience of loss and pain for all those who've died. Aweida said this ceremony is about building mutual respect. "If you respect your enemy, he will respect you," Aweida said. "Then, you will go to solution. But if you hide from him, and you will afraid from him, you will never go to solution." Sitting next to one of his Jewish Israeli colleagues and a fellow activist, Aweida said the current political stalemate is working against them. Negotiations are stuck, he said, and then there's ongoing Jewish settlement building in the West Bank and East Jerusalem. "There is no peace. And there is no conversation. And the settlement is making my work and his work so difficult. Because, what can I tell my people and what he can tell his people? Everything is frozen," he said. Aweida concedes that many Palestinians would condemn him for taking part in a public event with Israelis while the occupation continues. And just outside, there was more disapproval. A couple of dozen protesters waved Israeli flags and denounced the Tel Aviv ceremony for glorifying terrorists. In a speech in Jerusalem on Wednesday, Prime Minister Benjamin Netanyahu talked about national unity on this Memorial Day. But what makes that so difficult, are two profoundly conflicting narratives about these two days of national reflection. While Israelis commemorated Memorial Day Wednesday, and will celebrate Independence Day Thursday, Palestinians mark the 1948 anniversary of the founding of Israel as their "Nakba," or catastrophe. The Hand in Hand school in Jerusalem — Kindergarten through 12th grade — is one of the few places in Israel where Jewish and Arab kids go to school together. The place is all about promoting co-existence, and that makes Memorial Day tricky. A mixed high school class of Arab and Jewish students discusses a documentary they just viewed about a suicide bombing. The idea is to let the students deal with tough issues through dialogue, said education director Inas Deeb. But she called today, "a very difficult day." "We're still in a process. We try to learn what is the best way, what is the right way, what is the most relevant way," Deeb said. "But it's very tense. We have to allow ourselves to accept each others feelings, to talk about them. And this is difficult. But getting them together now does not mean that we solve everything." Deeb said this is the only day of the year students here are divided up. Jews attend one ceremony while Arabs have separate activities. But they are careful to end the day together, by gathering in the courtyard to release a heart-shaped balloon with the word "Love" on it.