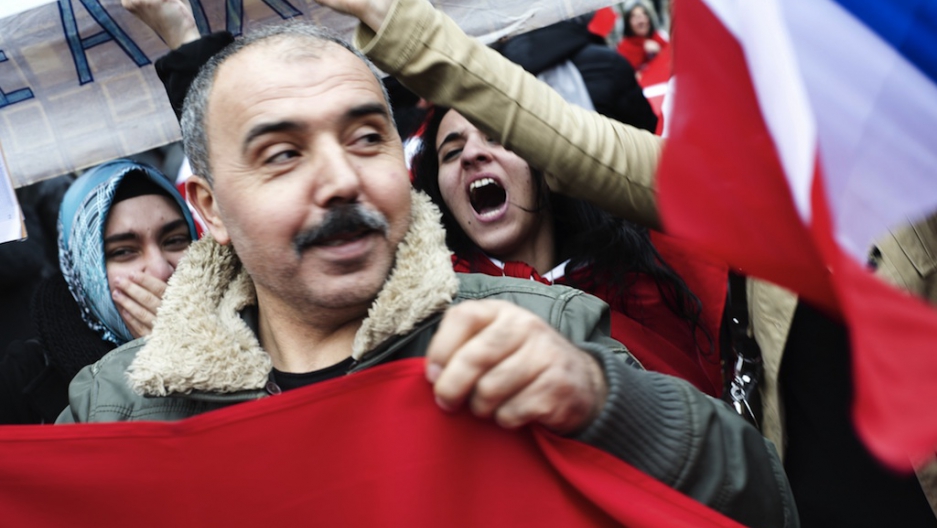 Turkish people demonstrate near the French Senate against a bill criminalizing the denial of the Armenian genocide on January 23, 2012 in Paris. France drew Turkish ire, when it approved the bill which threatens with jail anyone in France who denies that the 1915 massacre of Armenians by Ottoman Turk forces amounted to genocide. The law was later overturned.
Credit: FRED DUFOUR
Share

Since the mid-1980s, legislation criminalizing the denial of the Holocaust has become the norm. There are 17 countries with Holocaust denial laws, mostly in Europe. In general no one complains about these laws, and there have been prosecutions in England, Austria, Germany and France.

Yesterday, on the eve of the anniversary of the 1915 Armenian genocide, French President Sarkozy announced he would try again for a law to criminalize denial of that genocide, too. (France has had a Holocaust denial law since 1990.) But the backlash from Turkey and people of Turkish origin has been severe, many claiming these laws are an insult to history and their country. The first law against Armenian genocide denial was overturned last February, which Turkey called a "positive" move. The Turkish government, then and now, has accused Sarkozy of politicizing what they deem a historical, war-time action, ahead of upcoming elections.

According to Al Jazeera, the International Association of Genocide Scholars has recognized the Armenian genocide since 1997, despite Turkey's fierce denials.

Meanwhile, across the pond, Armenian-Americans face a different problem with their executive. That is, President Obama did not mention the word "genocide" Monday when he announced a new Atrocities Prevention Board while he toured the Holocaust museum, nor did he mention it yesterday when he commemorated the Armenian anniversay.

On the campaign trail and in the Senate, then-candidate Obama was both a signatory on a bill to recognize the massacre of 1.5 million Armenians as genocide and also promised in a strongly-worded 2008 statement that when elected he would, "recognize the Armenian Genocide."

Instead, Obama said yesterday, "We honor the memory of the 1.5 million Armenians who were brutally massacred or marched to their deaths in the waning days of the Ottoman Empire."

The president's statements have infuriated the Armenian-American community, which has issued calls for Obama to both acknowledge that the mass killings were genocide, and to pressure Turkey to do the same and investigate its history, accusing him of playing politics to make nice with Turkey.

"Turkey, an emerging leader in the Muslim world, needs to face up to the horrors that were unleashed a century ago and offer apologies," wrote Nina Shea today, a former commissioner on the U.S. Commission on International Religious Freedom. "President Obama should take the lead in encouraging Ankara to cooperate in an open, impartial investigation into what exactly occurred during this period."

The Obama administration's reputation on the matter wasn't helped by Secretary of State Clinton saying in January that the original French law actually did infringe on free speech because the matter is still up for debate by historians - it's not clear to anyone whether the Armenian genocide is actually a genocide.

Bernard Lewis of Princeton University is one of the world's foremost scholars on the Middle East and has said that there is no proof of a conspiratorial effort on behalf of the Ottomans to target Armenians specifically for massacre during World War One, the way there is proof of this in other instances of genocide.

“This is a question of definition and nowadays the word 'genocide' is used very loosely even in cases where no bloodshed is involved at all and I can understand the annoyance of those who feel refused," said Professor Lewis in a 2002 interview with C-SPAN [PDF]. "In this particular case, the point that was being made was that the massacre of the Armenians in the Ottoman Empire was the same as what happened to Jews in Nazi Germany and that is a downright falsehood."

He continues, after clarifying facts that armed Armenian rebels had joined with Russia to invade, "to make this, a parallel with the holocaust in Germany, you would have to assume the Jews of Germany had been engaged in an armed rebellion against the German state, collaborating with the allies against Germany. That in the deportation order the cities of Hamburg and Berlin were exempted, persons in the employment of state were exempted, and the deportation only applied to the Jews of Germany proper, so that when they got to Poland they were welcomed and sheltered by the Polish Jews. This seems to me a rather absurd parallel.”

Of course, there is the more mainstream argument that opinions like those of Professor Lewis and the Turkish government are denialist and generally wrong. However, because these opinions are not held by a fringe minority (in fact, the Armenian genocide truly is hotly debated in academia), unlike the deniers of other historical genocides that are more recent like the Holocaust, Sudan, and Rwanda, Secretary Clinton wasn't wrong.

The question remains: how can something like a questionable historical fact be criminalized, if that fact isn't defined or accepted by a wide majority? Under anti-speech laws, it would become criminal to debate the issue, ask questions, or dig deeper for the truth.