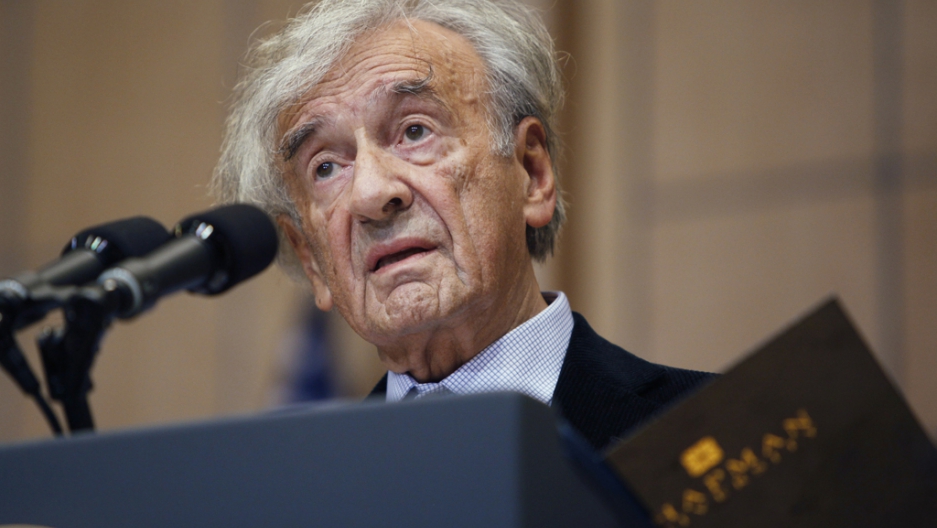 Nobel Laureate Elie Wiesel took the stage at the Holocaust Museum on Monday to introduce President Barack Obama, taking the opportunity to remind the world of the lessons learned from the Holocaust.

Drawing parallels to the conflict in Syria, Wiesel said, "Have we learned anything from it? If so, how is it that Assad is still in power? How is it that the No. 1 Holocaust denier Ahmadinejad is still a president? He who threatens to use nuclear weapons to destroy the Jewish state," according to Politico.

When Obama took to the stage after his introduction, he said, "It’s a bitter truth – too often, the world has failed to prevent the killing of innocents on a massive scale. And we are haunted by the atrocities that we did not stop and the lives we did not save," according to The Jerusalem Post.

Though Obama stressed that the US could not intervene militarily in every conflict, he said that "preventing mass atrocities and genocide is a core national security interest and a core moral responsibility of the United States of America."

Obama said, "We recognize that, even as we do all we can, we cannot control every event. And when innocents suffer, it tears at our conscience." He added, "Elie alluded to what we feel as we see the Syrian people subjected to unspeakable violence, simply for demanding their universal rights. We have to do everything we can," according to The Jerusalem Post.

Foreign Policy noted that Wiesel's call to action was reminiscent of a speech he gave in 1993, asking former President Bill Clinton to address the atrocities happening in Bosnia.

Wiesel said then, "I have been in the former Yugoslavia last fall. I cannot sleep since for what I have seen. As a Jew I am saying that we must do something to stop the bloodshed in that country! People fight each other and children die. Why? Something, anything must be done."

Here is the entire speech, with Wiesel's introduction and Obama's speech, courtesy of The White House: