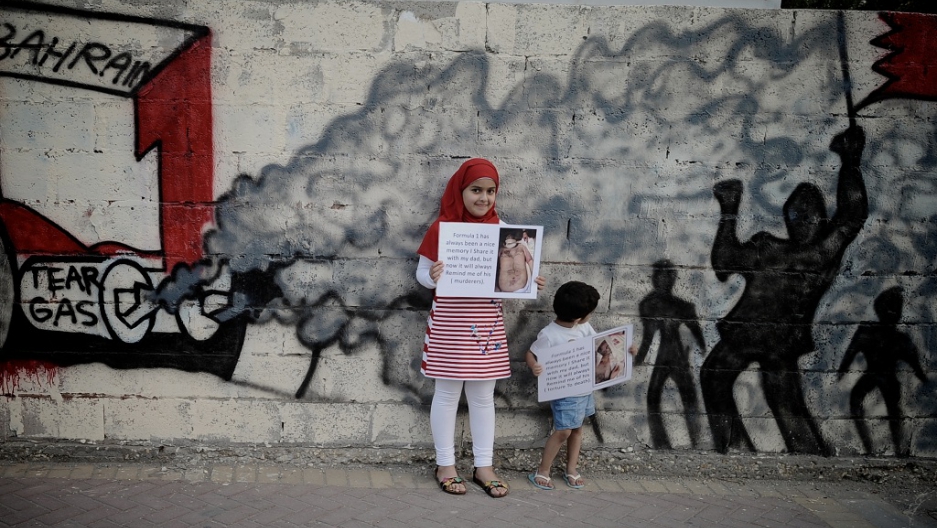 Bahraini children hold up pictures of tortured democracy activists as they pose in front of graffiti depicting a scene of anti-government demonstrations in the Shiite village of Barbar on the western outskirts of the capital Manam. Shiite-led street demonstrations have turned increasingly violent, as the ruling Sunni Khalifa dynasty continues its crackdown on dissent in an effort to portray that all is well in the island kingdom ahead of the Grand Prix Formula One on Sunday.
Credit: STR
Share

Bahrain's major opposition today said the body of a slain protester was found in a flashpoint village overnight, scarcely a day before the disputed Grand Prix is set to kick off in the restive Gulf nation, said The Guardian.

The opposition group al-Wefaq said they found "the body of martyr Salah Abbas Habib" near where authorities had "brutally attacked" protesters on Friday in the town of Shakhura, according to Agence-France Press.

It was unclear how Habib had been killed, but AFP cited a tweet from the interior ministry that "a deceased person was found in Shakhura today," adding that the incident was under investigation.

Reports said at least 18 people wounded in clashes between security forces and demonstrators on Friday in a fresh wave of demonstrations against this weekend's high-profile Formula One race, an event decried by the opposition as one that legitimizes the regime.

The island nation was barred from holding the Grand Prix there last year due to a crackdown on a pro-democracy protest.

Bahrain has been in political turmoil due to a 14-month-long uprising against the government inspired by the recent overthrow of longtime leaders throughout the Arab world. More than 40 people are believed to have been killed 1,600 arrested as authorities moved to quell the mainly Shiite-led uprising against the ruling Sunni monarchy.

Iran's Shiite authorities hit out at the government over the violence today, with top official Hossein Amir-Abdollahian calling the situation there "perilous," according to the country's state-run Press TV.

“The most appropriate solution for Bahrain is to pay serious attention to the popular demands and to put an end to the suppressions in the country," Amir-Abdollahian was quoted as saying.

Authorities have promised to respond to protesters' demands, but Amnesty International on Tuesday accused the government of instituting cosmetic reforms, citing ongoing "reports of torture and use of unnecessary and excessive force against protests" in a scathing report on rights abuses there.

Of particular concern is the jailing of prominent rights activist Abdulhadi al-Khawaja, whose case received international attention after he was arrested last April on charges of treason, accusations he says are politically motived. He is currently in his third month of a hunger strike in protest of the sentence.