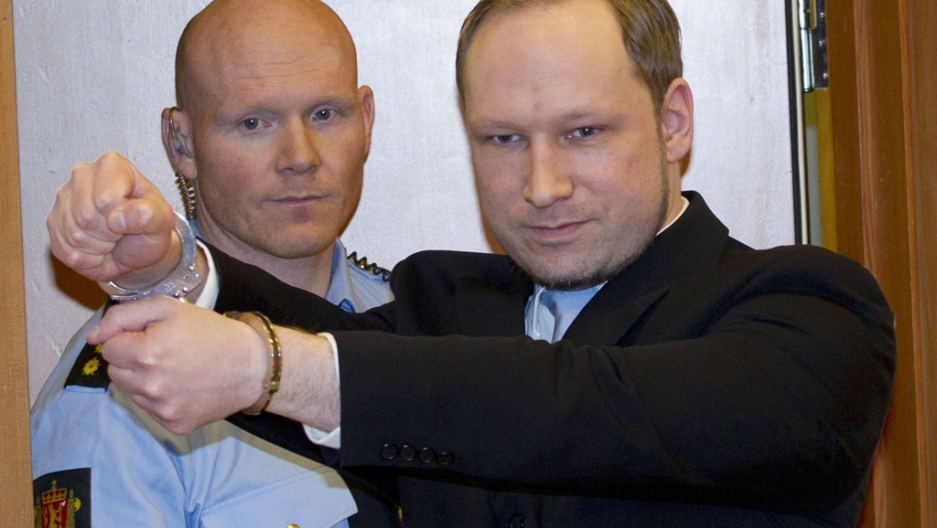 Norwegian right-wing extremist Anders Behring Breivik (R), 32, arrives on February 6, 2012 in court in Oslo that was convened for a hearing on his detention. The Norway gunman who killed 77 people in twin attacks on July 22, 2011 asked an Oslo court to release him immediately, explaining that his massacre was a "preventive attack against state traitors." AFP PHOTO / DANIEL SANNUM LAUTEN
Credit: DANIEL SANNUM LAUTEN
Share

The Oklahoma City bombing and Al Qaeda attacks served as inspiration and education for mass murderer Anders Behring Breivik, he told a courtroom in Norway today, The Associated Press reported.

On the fifth day of his trial, the man accused of killing 77 Norwegians relayed details about how he studied Timothy McVeigh’s 1995 bombing of a US government building that killed 168 and injured 600.

Breivik admitted to killing eight people by bombing a Norwegian government building, then shooting 69 others – mostly teens – at a Labour Party camp on July 22; he said they betrayed Norway by embracing multiculturalism.

The far-right extremist has pleaded not guilty, and claims to be part of a Christian group called the Knights Templar.

Authorities have found no evidence of a larger group, and two court reports disagree on Breivik’s sanity.

His chilling, matter-of-fact testimony froze onlookers and victims’ family members in the courtroom.

Breivik told prosecutors he learned to shut down his emotions in order to carry out his “gruesome, barbaric actions,” AFP reported.

“I am a very likeable person under normal conditions,” he told court, according to AFP. “You have to choose tactics and strategies to dehumanize (the enemy) ... those who I see as legitimate targets.”

His trial has garnered worldwide attention, and at least one vocal, American “pen pal,” The Los Angeles Times reported.

Kevin Forts, a 23-year-old Massachusetts man, said he “dreams” of one day meeting Breivik, and called his actions “atrocious but necessary.”

“I believe he is a nationalist and a patriot, and not the terrorist neo-Nazi that the media portrays him to be,” Forts told a Norwegian reporter during an interview in the US.

About 100 people from countries such as Sweden, Germany, Russia and Britain have sent Breivik letters of support in jail, the LA Times said.

Police also charged Forts with assault in February, saying he assaulted his girlfriend, the Worcester Telegram and Gazette reported.

Later, Forts was removed from Assumption College in Worcester, where he was a senior, The Associated Press reported.

“He’s fighting against cultural Marxism and an Islamization of Norway and he found that the most rational ... way to accomplish that was through terrorist actions on Utoya and in Oslo,” Forts said.