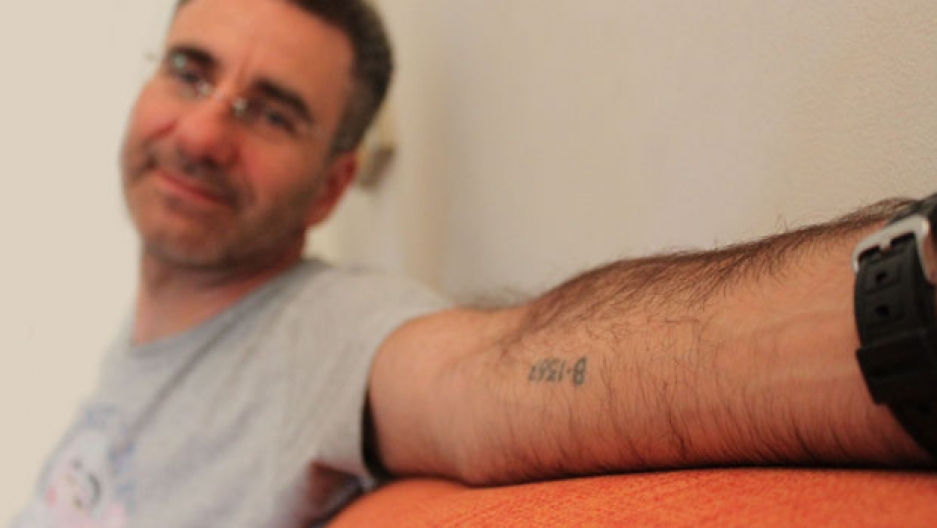 Some 15 years ago, Ron Folman had his father's concentration camp number tattooed on his arm. (Photo by Daniel Estrin.)

About 15 years ago, Ron Folman did something almost unheard in Israel.

He walked into a tattoo parlor in downtown Tel Aviv with his father, Yeshayahu Folman, a survivor of Auschwitz. He asked the tattoo artist to take a look at the faded green numbers on the back of his dad’s left arm.

Then he made a request.

“Please do the exact replica, the exact copy, of what you see on my father’s hand. B-1367,” Folman said. “I remember the guy said several times, ‘Do you really want that number on your hand?’”

Ron was sure of it; he’s an independent thinker. Ron was a fighter pilot in the Israeli army, but he’s also been a longtime human rights activist.

He’s a university physicist, but he also dabbles in art. He’s rearing three daughters, and says he and his wife are thinking about adopting.

This is the kind of guy who does what he thinks is the right thing to do — and the same went for his tattoo.

“I was 100 percent sure I was doing the right thing,” Ron said. “It was emotional, pure in my heart.”

Growing up, his dad never liked talking about his own experiences during the Holocaust, Folman said.

“It took me many, many years to convince him to go back to Auschwitz and show his son where he was,” Folman said. “He remembers everything.”

“I remember it well,” Yeshayahu Folman said. “We were several thousand people. We were taken off the train. We came in those striped suits, like prisoners. When we came, there were two people sitting at a table with a list. One was looking at list, and the other was doing tattoos. I just remember a little bit of pain. He took, maybe, 30 seconds, and it was done.”

Folman is proud of his father. After the war, he became a chief scientist in Israel’s agricultural ministry, and he was even sent to Africa by the United Nations to work on its food program.

When his father was in the hospital about 15 years ago, Folman thought things could take a turn for the worse — and it got him thinking.

“I could tell him a thousand times, ‘Dad, I understand your pain. You have seen the most ugly side of mankind with your eyes.’ But words seemed not to be enough. I felt I had to do something more than that,” Folman said.

That’s when he told his father and mother he was going to get the tattoo.

“We were absolutely against it,” Yeshayahu recalled. “You are putting a burden on your children that has to do with the Holocaust!”

His wife, Luba, said they realized they couldn’t talk their son out of it.

“We decided, if you can’t fight them, join them,” she said. “We went along with him to the tattoo. I wanted to be sure that everything they do is sterilized.”

“Sometimes you want to be a witness to the crime,” Yeshayahu added, laughing.

For his son, the concentration camp tattoo is an important symbol. But Yeshayahu said for him, his tattoo is not symbolic.

“The situations we have been in as Holocaust survivors had many more tragic points or emotional points than this thing,” he said. “We were reduced to much less than numbers. (The tattoo) had no special importance. It was much less important than many other things that happened.”

The symbol of his tattoo is just that: a symbol. It can’t even begin to fully represent what he went through. Symbols aren’t perfect – as Folman himself discovered in the tattoo parlor. The tattoo artist messed up the number three.

“You see that flat head?” Folman said, pointing to the numeral 3 on his tattoo. “My father has a completely round three. When I saw that it was too late to change it. I was very angry.”

Folman's father was also angry, but for a different reason: he thinks the Holocaust should be commemorated by public ceremonies. His own family, he believes, should move on.

“One of the duties of survivors of the (Holocaust) is to try that the next generation will be normal,” Yeshayahu said. “The private family approach has to bring this thing to an end at a certain generation. We are not going to carry on with those feelings.”

Those feelings, though, still carry on. Folman's 9-year-old daughter asked him about his tattoo a few months ago. For the first time, he sat down with her and told her the full story of her grandfather’s experience. Last week, Folman's 12-year-old daughter announced she wanted the same tattoo. His response: absolutely not.

But he still believes getting the tattoo was the right decision, even if the “3” doesn’t look exactly the same as his dad’s — and even if his dad objects to what he did in the first place.

It’s not just his dad’s tattoo anymore. It’s Folman's too.