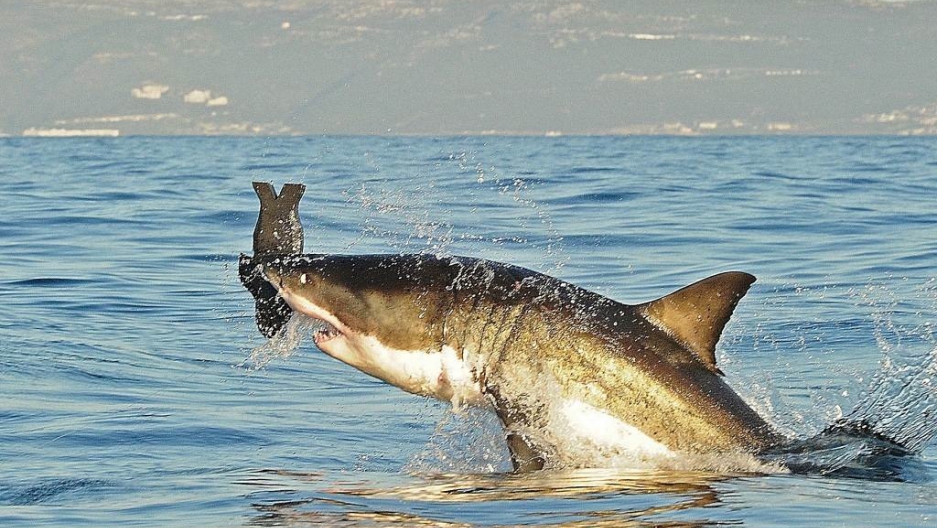 A Great White Shark jumps out of the water as it bites a fake decoy seal near False Bay in South Africa.
Credit: Carl de Souza
Share

JOHANNESBURG — A deadly great white shark attack off Cape Town has sparked anger at a documentary maker who was filming shark research in the area.

David Lilienfeld, a 20-year-old champion body boarder, died Thursday after a "huge and aggressive" shark severed his right leg at the hip. The shark was estimated at between 13 and 16 feet in length.

In November, Lilienfeld represented South Africa at the World Bodyboard Championship in the Canary Islands.

US-based documentary maker Chris Fischer had been filming "Shark Men," a documentary program which has aired on the National Geographic channel, in waters near Cape Town.

While South Africa's environmental authorities previously said the "Shark Men" project was a great opportunity for researchers, and posed no danger to swimmers, some South Africans have accused Fischer's team of attracting sharks to swimming areas by releasing chum into the ocean.

The "Shark Men" project involves catching and tagging great whites on a specially designed boat, and has been praised by some scientists who say the data collected is crucial in understanding shark populations under threat.

But critics have argued the practice is harmful to sharks, and last month launched online petitions calling on South African authorities to halt the shark tagging, and asking National Geographic to stop airing the show.

The petition, which started in California, said: "Tagging has already proven to be more damaging to the sharks while the data gathered has been poor. Additionally, research should be conducted for the basis of research and not on the basis of a TV show."

South Africans took en masse to the "Shark Men" Facebook page upon news of the deadly great white shark attack, many of them blaming the documentary makers for Lilienfeld's death.

Another said: "Very sad that such a young talented life was taken today. All for some stupid TV show - why not do the research in your own waters instead of invading ours! Hope your ratings drop!!!"

But some people defended the "Shark Men" project.

"Over the last few years we've experienced several attacks in [Cape Town's False Bay]. None of these attacks were related to chumming/research or other human activities. (That we know of)," a commentator said.

Fischer posted a note on Facebook about the "tragic news" of the body boarder's death, but noted that his research team had left the False Bay area near Cape Town three days ago.

"During our 24 hrs of work (Sun afternoon to Monday afternoon) there we chummed 24 kg of pilchards (sardines). Less than the daily allotment for each of three cage diving boats working daily," he wrote. "We are terribly sorry again for the loss of this family and at this time our thoughts and prayers are with them."

"This incident is a tremendous tragedy and I'm very shocked. No more field work will be proceeding from here on out," Alan Boyd, the ministry of environment's acting director for Coastal and Biodiversity Conservation, told SAPA.

The Cape Times reported recently that local residents, opposed to the "Shark Men" project, had started issuing their own shark alerts to warn the public of “increased shark activity."

But South Africa's Department of Environment Affairs, which issued the permits for the research and filming, had called these alerts “misleading, inappropriate and alarmist."

South Africa's Eyewitness News reported that National Geographic has distanced itself from "Shark Men," saying it did not renew the show on the NatGeo channel and is not involved in the filming.